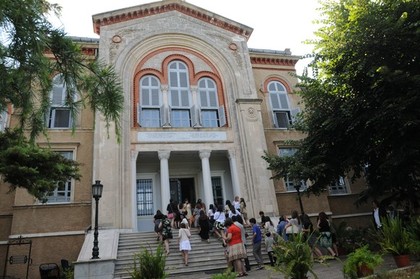 CONSTANTINOPLE (From the website of Today’s Zaman) – Following a meeting held on Friday, the Council of Foundations — part of Turkey’s Directorate General for Foundations (VGM) — returned 190 hectares of forest to the Greek Orthodox Halki (Heybeliada) Seminary in Istanbul.

According to the decision, 190 hectares of woodlands near the Halki Seminary will be given to the seminary’s owner, the Aya Triada Monastery Foundation. This is the biggest property return to a minority group in the history of Turkey.

Established in 1844 on the island of Heybeliada, Halki Seminary was closed in 1971 under a law that placed religious and military training under state control. It was the only school where Turkey’s Greek minority educated its clergy. The theological school once trained generations of Greek Orthodox leaders, including the current Patriarch Bartholomew, who is one of its 900 graduates.

Minority foundations, seeking the return of property seized by the Turkish state in the first decade of the Turkish Republic, are finding that taking back what belongs to them is not going to be easy, despite a 2011 law passed to ensure confiscated property be returned to its rightful owners.

In August of last year, the Justice and Development Party (AK Party) government adopted legislation to return all confiscated immovable property belonging to minority foundations in Turkey, a long-overdue step towards expanding the rights of minorities in the country. The decree allows foundations to reclaim real property declared back in 1936. All real property, cemeteries and fountains are to be returned to their rightful holders as per the decree. Immoveable property currently belonging to third persons will be paid for. The process has been ongoing for some time, as foundations were given 12 months to apply to authorities.