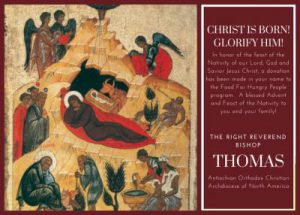 Thus all magic was dissolved and every bond of wickedness vanished; ignorance was abolished and the old kingdom was destroyed, since God was becoming manifest in human form for the newness of eternal life; what had been prepared by God had its beginning. Hence everything was shaken together, for the abolition of death was being planned.

At this great feast of the Nativity of Jesus Christ, these words from St. Ignatius the God-bearer of Antioch focus us powerfully on the purpose of the advent of the Savior Jesus. As we read in the Scripture, there was a proclamation to God’s glory of “peace on earth, good will toward men” (Luke 2:14). But why? Why would the coming of Jesus mean peace and good will toward men? There does not seem to have been peace in the centuries that have passed since, and in our own time we certainly see no lack of ill will toward mankind from his fellow men.

Peace and good will were coming because of a war being declared at that time, with many battles fought since then. God was declaring a war on “magic” (man’s desire to control others through power), on “every bond of wickedness,” on “the old kingdom” of the devil that had been ruling for so long. With the coming of the Son of God “manifest in human form,” God’s great plan for
the world was being inaugurated, to bring it to “the newness of eternal life.” Even “the abolition of death” itself was being planned.

That is why there is peace now spreading on earth, not because sin is yet gone, but because death is being abolished and with it the old kingdom of our adversary the devil. The coming of God in the flesh is a sign for us and the beginning of the open war on death that our Savior will win. And so we join with Him in His conquest of death by participating in His coming and in His priesthood in this world, a priesthood of sacrifice and therefore transformation and sanctification of all things. And so we say: Christ is born! Glorify Him!