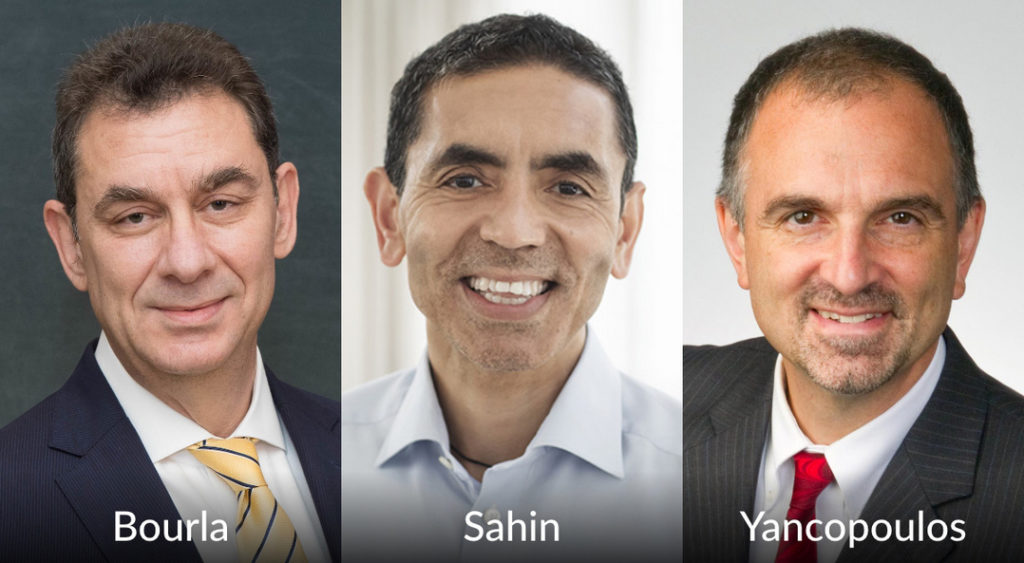 His Eminence Archbishop Elpidophoros hailed the choice: “I am personally grateful, and grateful on behalf of the entire Church and all human beings of good will, to these brilliant scientists. Through their leadership, the hard work of their teams and by the grace of God, they have been leaders in producing and delivering life-saving vaccines. No one this year is more deserving of this prestigious award than these three men, who have done so much to bring the world out of this scourge that has devastated so very many lives.”

In recognizing the contributions of Drs. Bourla, Sahin, and Yancopoulos to bringing an end to the global pandemic, National Commander Limberakis noted: “As a physician myself, I have seen the horrors of Covid-19 up close, and so I am deeply aware of the great good that these men have accomplished by bringing these vaccines to the world quickly and safely. The service they have performed is truly transformative, and has given hope back to the world. We all owe them a profound debt of gratitude.”

Dr. Albert Bourla has been Chairman and Chief Executive Officer of Pfizer since January 2019. He led his team of scientists and manufacturing colleagues, in partnership with BioNTech, to accomplish the unprecedented feat of developing and distributing the world’s first COVID-19 vaccine in under 300 days. He has held several other leadership positions at Pfizer, including Chief Operating Officer and Group President of Pfizer Innovative Health which included the Consumer Healthcare, Inflammation & Immunology, Internal Medicine, Oncology, Rare Disease and Vaccines business groups. He also created the Patient and Health Impact group, dedicated to increasing patient access, demonstrating the value of Pfizer’s medicines, and business model innovation. He is a Doctor of Veterinary Medicine and holds a Ph.D. in the Biotechnology of Reproduction from the Veterinary School of Aristotle University. He is a native of Thessaloniki, Greece.

Dr. Ugur Sahin, BioNTech’s CEO, is a physician, immunologist and leader in the development of novel approaches to fight cancer and infectious diseases. Sahin initiated and oversees “Project Lightspeed,” the historic development of the first mRNA vaccine for COVID-19, moving from lab and clinical testing to conditional approval within an unprecedented 11-month period. He is also Chairman of the Scientific Management Board of the Helmholtz Institute for Translational Oncology (HI-TRON), also in Mainz.

George D. Yancopoulos, M.D., Ph.D., has built Regeneron alongside Len Schleifer as its President and Chief Scientific Officer for the past 30 years. Regeneron invents life-transforming medicines for people with serious diseases. He is the holder of more than 100 patents and a principal inventor of Regeneron’s nine FDA-approved medicines and foundational technologies. He is the key driver of Regeneron’s unique science-driven culture and successful drug discovery and development engine, which includes the company’s COVID-19 program to address the ongoing pandemic with an investigational antibody cocktail. He received his M.D. and Ph.D. from Columbia University and became a professor of biology by age 28. He was born in 1959 to Greek immigrants.

The Athenagoras Human Rights Award was established in 1986 by the National Council of the Order of St. Andrew the Apostle, Archons of the Ecumenical Patriarchate in America. The Award was named after one of the great Church leaders of the 20th Century, the late Ecumenical Patriarch of Constantinople, Athenagoras I. The Award is presented every year at the Annual Banquet of the Order to a person(s) or an organization that has consistently exemplified by action, purpose and dedication, concern for the basic rights and religious freedom of all people.