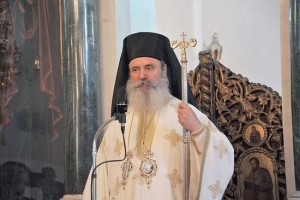 [Athens, November 17, 2015] Since the Church and state in Greece are not separated and priests are government employees, the Church of Greece was affected by the reduction of the state sector policy, reports AgionOros.ru.

The state has dramatically reduced the number of ordinations of new priests, and that is why many parishes are currently without pastors.

According to the present legislation, a new public servant (in our case: a cleric) can be accepted for employment only after retirement of ten of his colleagues.

According to the data of the Holy Synod of the Church of Greece, the current number of parishes without pastoral care has reached 22%, the Church is now short of 2,300 priests out of the total number of 10,500 necessary priests.

First of all, small settlements are in want of pastoral care. Most of them are either situated at great distances from populated localities, or all but inaccessible because of a poor transportation infrastructure. At the same time, an average small community is unable to maintain a priest by its own means.

Metropolitan Efstathios of Momemvasia and Sparta describes the situation as critical: “Each diocese is lacking at least 20 priests, in our metropolis 70 priests are lacking. It means that the Liturgy is not celebrated at some churches on Sundays. Residents of small villages are abandoned by officials, by teachers, state services. Only the Church remains with them. But if there are no priests, they will lose protection and support altogether.

When there is one new ordination of a priest for 6-7 retiring priests, you realize where we are going. In 15 years only 20-30 of 120 priests will be left in the diocese, and each of them will have to be in charge of 4-5 parishes, situated many miles away from each other”.

Metropolitan Jeremiah of Gortynos shares concern of the High Hierarchy of the Church of Greece: “In my diocese, 50 of 150 churches have no priests. Bells do not ring any more. Once a local resident said to me: “We have no teacher, no priest, our bells ring no more… So one day we will become Turks””.

The hierarch has reminded that it was the Orthodox Church that saved the Greeks from islamization and from losing their national identity in the years of the Ottoman yoke.