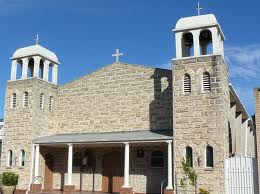 Is this funding fair? HINDMARSH MP Steve Georganas has defended a $5 million grant to a local Greek Orthodox church affected by aircraft noise.

Mr Georganas said the grant to the St Nicholas Greek Orthodox Church in Thebarton to install soundproofing, which was announced in last night’s Federal Budget, was not “pork barrelling” ahead of the upcoming federal election.

“`This was a program put in place … by the former Howard government in 2000-01, and we’re just continuing the program.”

The church is currently in Mr Georganas’ marginal electorate of Hindmarsh, but following a redistribution will fall into the seat of Adelaide from the 2013 election, which is held by Employment Participation minister Kate Ellis.

Instead, Mr Georganas said the grant – which was provided as part of the Adelaide Airport Noise Amelioration Program – followed money given to insulate 648 homes, along with schools and other public buildings in the area from the impact of aircraft noise.

Mr Georganas said he had advocated for funding on the church’s behalf, but it was also a move strongly supported by the local community.

The installation of soundproofing at St Nicholas Greek Orthodox Church will be offset by the collection of a noise levy at Adelaide airport.

City of West Torrens councillor and St Nicholas parishioner Arthur Mangos said the church had campaigned for funding to soundproof the church for several years, and were pleased their turn had now come.

He said noise from flights regularly disrupted services and were so loud that parishioners could not hear themselves speak.

“I’m looking forward to the day I can attend a service and enjoy it without hearing a jet flying overhead.”

“The airport levies are paid around the nation, and yes, some of that money is used to deal with noise for people who live in the vicinity of the airport,” she said.

“If I was asked is it fair for people who live with aircraft noise get some alleviation from that aircraft nose, I would say yes, it’s fair.”