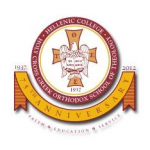 BOSTON – Fifty nine young men and women graduated from Hellenic College and Holy Cross School of Theology this year at the 70th Commencement ceremony held Saturday May 19, at the Pappas Auditorium in the School’s hill-top campus in Brookline, Mass. This year, Holy Cross Greek Orthodox School of Theology celebrates its 75th anniversary of its founding in 1937.

Hellenic College – Holy Cross bestowed an Honorary Doctorate of Humanities to George D. Behrakis, the philanthropist, successful entrepreneur and long time supporter of the School and the Greek Orthodox Church, in recognition of his outstanding professional achievements, his many humanitarian and philanthropic acts and his life-long and extraordinary commitment and service to his Hellenic Orthodox Christian heritage.

Archbishop Demetrios, the Primate of the Greek Orthodox Church in America and chairman of HC/HC’s Board of Trustees, presided at the Archieratical Divine Liturgy in the chapel of Holy Cross. As it is the tradition of the School, the processional began in front of the Administration building with the banners and flags of the School leading the graduates, the faculty, the trustees and the hierarchs to the auditorium. The ceremony began with the invocation and the singing of the National Anthems by the HC/HC Chorale conducted by Constantine Limberakis.

George D. Behrakis delivered the Commencement Address and told the graduates of Hellenic College to “be positive and always look to the future.” Turning to the Holy Cross graduates he told them “we need you now more than ever. The parishes and our communities need your spiritual leadership especially those who will follow their calling for the priesthood. Mr. Behrakis also told them that their calling and obligations “will not fit neatly into a 9 to 5 job,” because being a parish priest is much more than that. He also spoke of the important role of the presvytera within the community setting and in assisting her husband in his ministry. “It is very important to get to know your parishioners and their families very well,” he said and spoke of the many challenges facing the family and our Church. Finally, he admonished them to be trustworthy and said that “faith, trust and respect” are the pillars of a successful ministry. “Dream big, the higher the better, do your homework and lead by example,” he concluded.

Archbishop Demetrios in his pastoral and paternal exhortation urged the graduates to be the people of “iron will and good deeds” as is the honoree Mr. Behrakis, but also to always think of God’s presence as they plan and consider what they are going to do next, as they set goals and aspire to do good. He told them to say to themselves “I will do A, B and C,” but always add the phrase “God willing, and with the blessing, the synergy, the assistance and the grace of God.” The Archbishop finally told them to follow St. Paul’s exhortation in his letter to the Philippians to think and do “whatever is true, whatever is honorable, whatever is just, whatever is pure, whatever is lovely, whatever is gracious, if there is any excellence, if there is anything worthy of praise, think about these things. What you have learned and received and heard and seen in me, do; and the God of peace will be with you.” In his conclusion, the Archbishop conveyed the greetings and blessings of His All Holiness Ecumenical Patriarch Bartholomew, with whom, as he said, he had spoken the previous day.

Fr. Nicholas Triantafilou, president of HC/HC, offered a salutation and welcome at the beginning of the program and reflected on the productive and successful year and the 75th Anniversary of Holy Cross and the School’s vital role in the life of our Church.

Dr. Thomas Lelon, the vice-chair of the Board of Trustees, in his welcome to the hundreds of family members and friends, the hierarchs and the other dignitaries attending the event, took everyone back to the first days of the institution and the first commencement 70 years ago, on May 31, 1942. He said that HC/HC is indispensable to the life of the Church and asked the audience to “rejoice with the achievements of the graduates.”

Aphrodite Skeadas, president of the National Greek Orthodox Ladies Philoptochos Society, in her greeting said that Holy Cross is an institution that educates and uplifts. “You have the prayers of all twenty-seven thousand, mothers, sisters, wives and daughters, all women of the Philoptochos,” she said. Mrs. Skeadas presented a gift to the School totaling $86,700 for the Philoptochos scholarship commitment to the School.

Greetings were also offered by the Consul General of Greece to Boston Ilias Fotopoulos who offered a gift in support of the School’s scholarships and the continuing support of Greece to the senior trip program, despite the country’s financial difficulties. Greetings and words of wisdom and counsel were also offered by the dean of Hellenic College Dr. Demetrios Katos and the dean of Holy Cross Rev. Dr. Thomas FitzGerald.

Present in the commencement ceremony in addition to the persons named above were Metropolitan Methodios of Boston, Metropolitan Savas of Pittsburgh, Metropolitan Emmanuel of France, Bishop John of Worcester of the Antiochian Orthodox Christian Archdiocese, school trustees and professors and many friends and family of the graduates.