Even as the monasteries of the Orthodox Church are besieged by the coronavirus, apocalyptic-minded priests balk at state restrictions on public worship. 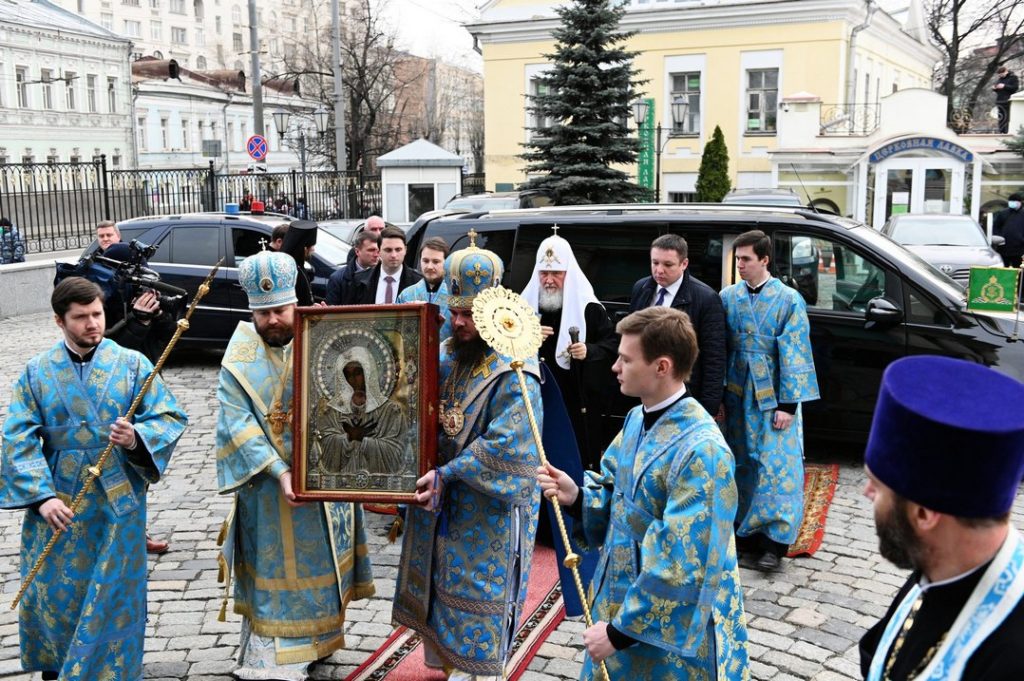 Patriarch Kirill, in the white headdress, leader of the Russian Orthodox Church, at a procession in Moscow last month. Experts say his reluctance to enforce orders against church gatherings has led to an explosion of coronavirus cases in monasteries and convents.Credit…Patriarchal Press Service, via Reuters

MOSCOW — A physics student at Moscow State University, Dmitri Pelipenko turned away from science in 2018 to devote himself to God, enrolling as a novice monk at Holy Trinity-St. Sergius Lavra, the spiritual center of the Russian Orthodox Church.

His spiritual journey, derailed by the coronavirus, came to an abrupt and gruesome end shortly after the Orthodox Easter.

Admitted to the hospital after testing positive for the illness, Mr. Pelipenko smashed a window on April 24, jumped outside, doused his body with fuel from a church lamp and set himself on fire. He died from his burns two days later.

His monastery swiftly blamed the suicide on “mental illness.” Others, however, asked whether the monk’s clearly fragile mental state had been broken by the apocalyptic mood gripping wide swaths of the Russian church, some of whose leaders have challenged the state’s stay-at-home orders as the work of the devil.

Around the world, religious believers of many faiths have been among the most resistant to restrictions on public gatherings, seeing it as an infringement on their right to worship. But the clash between faith and public health has been particularly divisive in Russia, where memories of religious persecution in the Soviet Union have made priests and their flocks highly sensitive to any limits on their rituals.

The split has gone beyond routine ecclesiastical feuds between liberals and conservatives, expanding to corrode a defining feature of Russian Orthodoxy under President Vladimir V. Putin: its trust in and support for the Russian state.

With some of the Russian church’s most important monasteries and other sacred sites now infested with the disease caused by the virus, Covid-19, the Orthodox Church faces not only a health crisis but a deep rift within its ranks about how the faithful should deal with the pandemic.

The Russian church, like the Russian state with which it has often moved in lock step, is rigidly hierarchical, meaning that even priests who understand the need to suspend services cannot do so without the blessing of a bishop, and bishops in turn cannot act without clear instructions from Patriarch Kirill, Russian Orthodoxy’s senior cleric.

Also like the state, however, the church is troubled by feuding between rival clans, leaving many ordinary believers uncertain about whom to trust as the number of confirmed infections nationwide rises by more than 10,000 a day.

“Unfortunately, it is obvious that there is no unity in the church in relation to what is happening,” a group of confused believers complained last week in an open letter to Patriarch Kirill.

Voicing alarm that some priests “openly preach that it is impossible to become infected in a church,” the letter pleaded for guidance because “the fullness of the church needs the truth.”

The patriarch, though a close ally of President Putin, initially dithered over enforcing instructions from health officials that people should avoid public gatherings like church services. He instead drove along a highway around Moscow in a black Mercedes van with a holy icon, blessing the Russian capital with prayer en route.

With the Kremlin increasingly worried by the accelerating pace of infection, the patriarch bowed to health warnings early last month and unequivocally urged worshipers to stay away from services over Holy Week leading up to the Orthodox Easter on April 19. But he left it up to local dioceses whether to hold services, which many did, particularly the Easter night procession and liturgy, the most important events of the year in the Orthodox Christian calendar.

RBK, a news outlet in Russia, calculated that churches remained open throughout Easter in 43 of the country’s 85 regions.

The soaring infections that followed have cast a shadow over plans for the opening of an enormous new cathedral dedicated to Russia’s armed forces. Conceived as a symbol of the intimate relations between church and state, the cathedral is in the final stages of construction in Patriot Park outside Moscow. 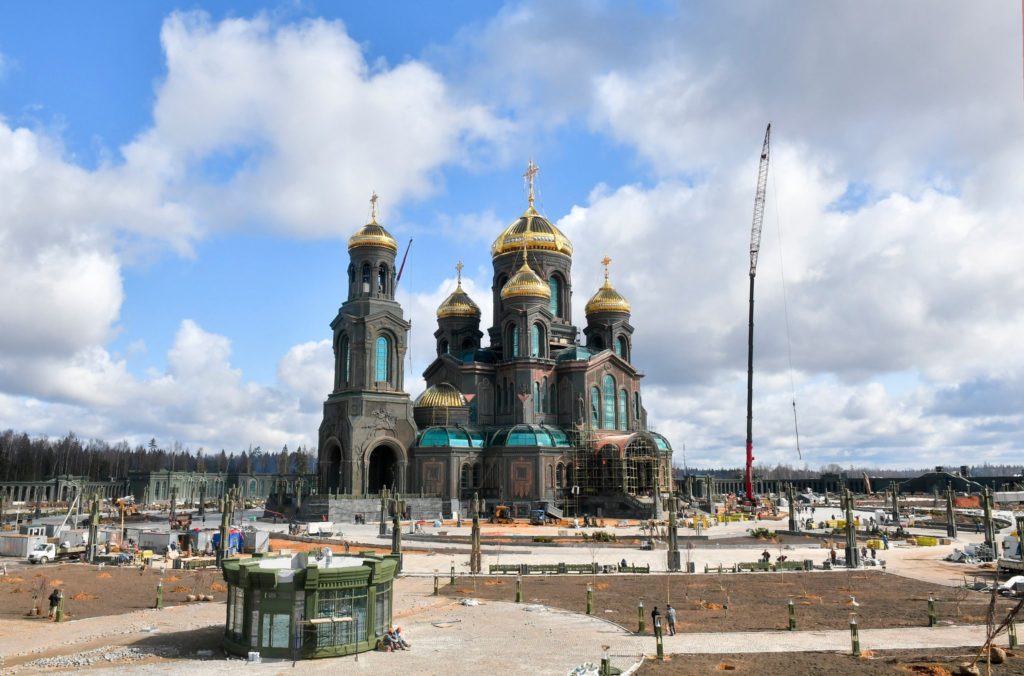 The opening of the new Cathedral of Russian Armed Forces in Patriot Park outside Moscow has been delayed. Credit…Sergei Kiselev/Moscow News Agency, via Associated Press

Originally scheduled to open on May 9, the 75th anniversary of the Red Army’s victory over Nazi Germany, it was to feature a mosaic of Mr. Putin, his defense minister and other state figures, including the Soviet wartime leader Stalin.

But amid growing tensions between church and state over the pandemic, a senior bishop overseeing the cathedral’s interiors announced last week that, at the Kremlin’s request, the mosaic of Mr. Putin would be removed. The opening has been delayed.

Instead of rallying to the side of the president and his officials as they try to contain the expanding pandemic by restricting public gatherings, including church services, many priests have complained bitterly that the state has no right to interfere in who attends services.

Discouraging public worship, warned Metropolitan Longin, a senior churchman in Saratov, a region in southwestern Russia, only revived painful memories of Soviet-era repression. He threatened damnation for those who enforced or obeyed restrictions, warning that anyone who carried out instructions from state health authorities that violated the dictates of faith “will be held accountable.”

Geraldine Fagan, the editor of “East-West Church Report,” a journal on religious affairs in the former Soviet Union, said, “There has been a real breakdown of trust.” Getting people to go to church, she said, is a priest’s “raison d’être, so orders that believers stay away have caused genuine surprise and anger.”

A few days before Mr. Pelipenko set himself on fire, a bishop in the northern Russian region of Komi protested restrictions on churchgoing as an infringement of fundamental rights and threatened to go to court to get them reversed. Declaring that the ringing of church bells was the best way to combat the pandemic, he claimed that the word coronavirus — derived from the Latin word for “crown” — is “not coincidental but is linked to the coronation and enthronement of the Antichrist.”

Sergei Romanov, a cleric in the industrial city of Yekaterinburg, also weighed in, thundering against restrictions on public gatherings, including church services, as part of a satanic plot aided by Jews.

The fury has left Patriarch Kirill struggling to restore some order, while at the same time fending off criticism that he has done too little, too late.

After a surge of infections in Moscow, the patriarch issued an order last week that monastery abbots and parish rectors in the Russian capital have “personal responsibility” for complying with state instructions aimed at combating the virus. Clerics and lay church workers who ignore the health authorities, he warned, face trial before a church court if their noncompliance results in death from Covid-19.

Apparently fearful of upsetting more traditional-minded priests, who dominate the church, the patriarch has so far taken formal disciplinary action against only one cleric, the relatively liberal Andrei Kuraev, who mocked the head of a Moscow cathedral who died from the virus as a “dumb careerist.”

Since Easter, churches and monasteries under the jurisdiction of the Russian Orthodox Church have reported a surge of infections in both Russia and in neighboring Belarus and Ukraine.

More than 200 people have been reported infected in and around a convent in the Nizhny Novgorod region east of Moscow, including 70 nuns.

St. Elizabeth, a convent run by the Russian church in Minsk, the capital of Belarus, where state officials have joined priests in playing down the risks of the virus, finally went into lockdown last week after scores of priests and nuns reportedly fell ill after testing positive.

The convent’s senior priest, the Rev. Andrei Lemeshonok, has been in the forefront of denialism, posting a video online titled: “Who can forbid us to believe?”

In it, he scolded worshipers for worrying about physical illness when “the scariest thing,” he said, is when people want to change their gender, don’t have children or otherwise ignore traditional values.

Some priests acted early to try and contain the virus. In March, for example, the rector at the Church of SS. Cosmas and Damian in Moscow started urging his flock to watch services online instead of attending in person. Even so, the rector and several others became infected.

Hit particularly hard by the coronavirus has been one of the most important religious sites of the Russian Orthodox Church, the Monastery of the Caves, in the Ukrainian capital, Kyiv. In early April, the Ukrainian National Guard blocked all entrances to the sprawling complex, where a labyrinth of catacombs holds the tombs of Orthodox saints, after the abbot refused to halt worshipers from visiting.

By the time it was sealed off, according to the mayor of Kyiv, 142 priests, including the abbot, and visitors had been infected.

Holy Trinity-St. Sergius Lavra, the monastery where Mr. Pelipenko, the suicidal novice monk, prepared to take his vows, tried to keep out visitors over Easter but, according to an account of events posted online by Bishop Pitirim Tvorogov, the rector of a theological academy housed in the monastery, angry worshipers protested “very aggressively” and forced the abbot to open the doors.

“The pestilence began on Good Friday,” with many of the “best clergy” falling ill, Bishop Pitirim said. Worshipers, he added, “demanded a miracle but no miracle happened.”