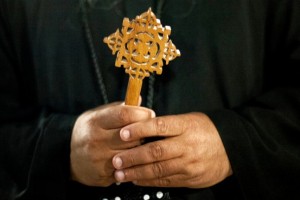 The Egyptian army’s crackdown on Mohamed Morsi’s Cairo supporters unleashed the largest attack on Coptic houses of worship since 1321.

No one knows exactly when the Virgin Mary Church was built, but the fourth and fifth centuries are both possible options. In both cases, it was the time of the Byzantines. Egypt’s Coptic Church—to which this church in modern-day Delga belonged—had refused to bow to imperial power and Rome’s leadership over the nature of Christ. Constantinople was adamant it would force its will on the Copts. Two lines of popes claimed the Seat of Alexandria. One with imperial blessing sat in the open; the other, with his people’s support, often hid, moving from one church to the other. Virgin Mary Church’s altar outlasted the Byzantines. Arabs soon invaded in A.D. 641. Dynasties rose and fell, but the ancient building remained strong, a monument to its people’s survival.

Virgin Mary Church was built underground, a shelter from the prying eye. At its entrance were two ancient Roman columns and an iron door. Inside were three sanctuaries with four altars. Roman columns were engraved in the walls. As in many Coptic churches, historical artifacts overlapped earlier ones. The most ancient drawing to survive into the 21st century: a depiction, on a stone near the entrance, of two deer and holy bread. Layers and layers of history, a testament not only to the place’s ancient roots but also to its persistence. Like other Coptic churches, the ancient baptistery was on the western side, facing the altar in the east. Infants were symbolically transferred through baptism from the left to the right. The old icons were kept inside the church, the ancient manuscripts transferred to the Bishopric in modern times.

Once there were 23 other ancient churches next to it, all connected through secret passages. Only Virgin Mary Church remained. Decline and survival, loss and endurance, the twin faces of the story of the Copts who built it.

Why Virgin Mary Church endured until modern times is a mystery. Some churches in Cairo survived because Coptic popes made them their residence. Being built on a place Jesus and his mother had visited gave others in Egypt a claim to fame and a chance at survival, while in still others the miracles performed by the patron saint were a reason for pilgrims to visit and donate. Virgin Mary Church had none of these. For hundreds of years, its sole claim to miracles: a Roman column that, according to parishioners, produced oil once a year on Good Friday. The church was probably too small and too remote from the center of authority to merit notice. Its flock never abandoned it. Most of the Copts had converted to Islam over the centuries, but in Delga a critical mass remained that kept putting candles in front of the old icons.

Then, in 1829, a boy named Boulos Ghobrial was born in a village nearby. He was baptized in Virgin Mary Church’s ancient baptistery and taught to read and write in its small school. He would become St. Abram, the Bishop of Fayoum, a man of deep spirituality, who performed thousands of miracles and resembled his master in his poverty. He died in 1914, and the Holy Synod would declare him a saint in 1963. Many churches would be built under his name, and his residence in Fayoum would become a huge attraction to pilgrims. His birthplace would reap some of the benefits.

Two newer churches were built next to Virgin Mary Church: St. George, about 100 years ago, and the modern St. Abram. Other buildings were soon added. A church that was a shelter from persecution under the Byzantines became a shelter from increasing discrimination and banishment from the public space in modern times. A large meeting room was built, as were a theater and retreat house. In the open space, a soccer field. Church permits became harder to get in Egypt and the small complex served 30,000 Copts.

Miracles are rare in modern times. More common is hardship, and plenty befell the churches of Delga. St. George was attacked a number of times and its domes destroyed. An enthusiastic bishop built two minarets only to have the Egyptian police destroy them. More threatening than a persecuting state was the mob. The ancient churches were attacked several times in the past. On July 28, Molotov cocktails and stones were thrown. The churches survived that day.

But survival was not destined two weeks later. The army’s violent crackdown on Mohamed Morsi’s supporters in Cairo unleashed a wave of attacks on churches the like of which Copts had not seen in centuries, thus laying waste to examples of a unique byway in the history of architecture, religious structures that are a hybrid of Egyptian, Greco-Roman and Christian Byzantine styles. Dozens of churches were burned and destroyed in the largest attack on Coptic houses of worship since 1321. A complete tally is still to be written. But in its latest report, the Egyptian Initiative for Personal Rights, Egypt’s best human-rights organization, documents a total of 47 churches attacked, of which 25 were burned, seven looted and destroyed, five partly damaged, and 10 attacked without sustaining heavy damage.

In this maelstrom, the ancient Virgin Mary Church was not spared. In a day of brutality, the people of Delga distinguished themselves. All three of Delga’s Coptic churches were destroyed. So were a Catholic and a Protestant church in the city. In place of Virgin Mary Church, the mob placed a sign: The Martyrs Mosque.

Other areas in the country attempted to compete. The school run by Franciscan nuns in Beni Suef was destroyed. It had been opened in 1889 and provided education to thousands of Egypt’s girls. A symbol of a bygone time. Lost with the building were many artifacts, statues and paintings. A museum in Malawi was also destroyed. About 1,200 ancient artifacts have been looted.

A Coptic exodus has been under way for two years now in Egypt. The hopes unleashed by the 2011 revolution soon gave way to the realities of continued and intensified persecution. Decades earlier, a similar fate had befallen the country’s once-thriving Jewish community. The departure of the people is echoed in the decay of the buildings. The landscape of the country is changing along with its demography. A few synagogues stand today as the only reminder of the country’s Jews. Which churches will remain standing is an open question.

Mr. Tadros is a research fellow at the Hudson Institute’s Center for Religious Freedom and the author of “Motherland Lost: The Egyptian and Coptic Quest for Modernity.”