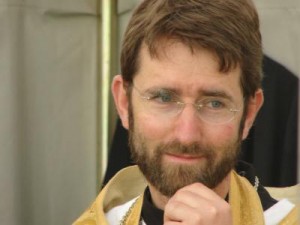 The 15th Western European Orthodox Congress took place in Bordeaux (France) from April 30th to May 3rd, 2015, under the aegis of the Council of Orthodox Bishops of France (AEOF). This 15th edition, the first congress being held in 1971, was attended by around 600 participants from various Orthodox dioceses in Western Europe and further, who came to share their view of what it means to be a Christian “being in the world, but not of the world”. The subject was pursued in four plenary conferences, three round tables and around thirty workshops, as well as in prayers and a tribute to the memory of Fr Cyrille Argenti.

The congress started on May 1st with the Divine Liturgy, at once setting the tone of the event: a gathering of very diverse faithful drawing their unity on the Eucharistic table. Nicolas Behr, in the name of the Orthodox Fellowship in Western Europe which organised the event, welcomed the participants. We heard messages sent by bishops detained by other commitments: Metropolitan Emmanuel of France, the chairman of AEOF, insisted that Christians are called to be the mediators between the visible and the invisible. Metropolitan Athenagoras of Belgium sent a long and warm message, recalling how he took part in all previous Orthodox congresses, “places of fabulous and so rewarding experiences”, and that his personality had been “forged” by the “major figures” he listened to during the congresses. Archbishop Job (Exarchate of parishes of Russian tradition) insisted on the pan orthodox scope of the gathering, calling the participants to be “constructive elements” in the Church.

The first lecturer was Fr Jean Gueit, the rector of the parish of Saint Hermogen (Marseille, France), a Professor Emeritus of Law (University of Aix-en-Provence, France) and the Chaplain of the Orthodox Fellowship. He based his reflection on the patristic saying: “God became man for man to become God”. He introduced the congress’ issue by demonstrating that the way humanity functions is characterised by the existence of increasingly violent and lethal conflictual polarities. Social life has remained possible only thanks to law and an organised political power. But God stays beyond this conflictual situation, and he reconciles us with ourselves and the cosmos. In conclusion, Fr Jean insisted on the liberating power of the Holy Spirit when faced with authoritarism: Church is not a straightjacket, but the body of the risen Christ.

In the afternoon,the second plenary conference gave us the opportunity to introduce Professor Assaad Kattan (from the University of Munster in Germany), a lay theologian of the Antiochian Patriarchate, an expert in the interpretation of the Church Fathers and in the dialogue between Christianity and Islam. In his speech, entitled “Orthodox theology without giving up”, Assaad Kattan called for a creative renewal of the theology, aimed at building bridges between the present post-modern reality and the ecclesial life. The theologian insisted on three factors: that we need to go back to a dynamic interpretation of the Church Tradition to uncover the fundamental message hidden under its transitional forms; that it is important to favour a theological attitude enhancing reason; and lastly that it is urgent to develop new methods of reading Tradition’s founding texts.

The conference was followed by workshops offering a whole array of themes, such as the connection between the work of psychologists and of spiritual fathers, passing on faith in families, the corporate life of a Christian, the dialogue between Christianity and Islam, etc. The evening was dedicated to a tribute to Fr Cyrille Argenti: witnesses reminded us that he was not only one of the architects of the Orthodox Fellowship, a strong promoter of French-speaking Orthodoxy and of the ecumenical dialogue, but that above all he was a great and genuine pastor, endeavouring to lead to Christ the many persons who came to him for help.

The second day of the Congress (Saturday, 2 May) started with Matins, followed by the third plenary conference, with Metropolitan Stephanos, the primate of the Estonian Apostolic Orthodox Church as the lecturer. He offered us a rich meditation, wondering how Christians, and Orthodox in particular, can find guidance, stuck as they are between the general loss of faith of the West and mounting fanaticism in Middle East and Africa. He demonstrated how the tension thus created can become the source of a renewed encounter of the world with the Gospel.However, he stressed that “pastoral work will stir the secularised society only if it speaks of communion”, revealing to man a hidden reality to be contemplated and reminding society of its sense of love.

Other workshops followed the conference. Then, in the beginning of the afternoon, we gathered for an ecumenical prayer for persecuted Eastern Christians. It was a moment of great fervour. Besides the conventioneers, several religious representatives were present, among them the Catholic Assistant Bishop of Bordeaux Laurent Dognin, as well as the elected member of the Town hall Office and representative of the Mayor of Bordeaux, Mr. Erick Aouizerate, also the Chairman of the Jewish Consistory of Aquitaine. We were all united in the same prayer for the martyrs of our time. Approximately 3000 Euros were collected, to be transferred to the Syrian-Lebanese branch of MJO (Mouvement de Jeunesse Orthodoxe / Orthodox Youth Movement) which supports a Syrian diocese particularly affected by the fighting.

Three round tables followed and were held simultaneously. The first one, entitled “What can we expect from the next pan Orthodox council?” moderatorated by Michel Stavrou (Saint-Serge Institute), with Fr Demetrios Bathrellos (Athens, Greece), Pierre Sollogoub (Orthodox Fellowship in Western Europe) and Fr Alexis Struve (Nantes, France and Kiev, Ukraine) as speakers. It took stock of the degree of readiness of the upcoming pan Orthodox council, and of the expectations it has aroused. Speakers insisted on the fact that little information has been given to God?s people, and that as a rule we have no idea of the significance of the event.

The second round table dealt with “modern psychology and Church Fathers” and was led in English by Dn Michael Bakker (the Netherlands). The speakers were Christine Artiga, a Psychotherapist in Bordeaux, Silouane Deutekom (Orthodox Peace Fellowship) and Matthieu Sollogoub, a professor of Molecular Chemistry (University of Marie and Pierre Curie in Paris). The third round table, entitled “Topical questions of ethics”, was led by Fr Christophe D. Aloisio (Institute of Saint John the Theologian, Brussels, Belgium), with the participation of Bishop Jean of Charioupolis (Geneva, Switzerland and Paris, France), Dr Denys Cl ment (Paris) and the psychologist and social worker Nathalie Victoroff (Paris). Several questions were discussed, such as abortion on medical grounds, the end of life, sexuality. It was the occasion to note again that life should not be made sacred at the expense of the person, and that pastors as well as faithful should receive training, so that the Church would be able to address the ethical challenges of the contemporary world. The second day ended with a festal vigil sung in English, French, Romanian, Arabic and Greek.

On Sunday 3 May, the third day, the Holy Liturgy was presided by Metropolitan Stephanos of Estonia, together with Bishop Marc (Romanian Metropolis) who gave us a beautiful homily on the healing of the lame man, and Bishop Jean of Charioupolis (Ecumenical Exarchate). At the end of a truly Pentecostal celebration, Metropolitan Stephanos branded this moment the apogee of the congress, and gave way to his feelings in front of a Western Orthodox congregation with whom, he said, he felt deep spiritual bonds, whose joys and pains were also his.

The last plenary conference’s lecturer was the lay Greek theologian Thanasis Papathanassiou, who entitled it: “The charm of idolatry and the making of a mission-less Church”. He called us to listen to the Holy Spirit and to make our Christian life more than a simple observance of rites. The theologian insisted on the risk of believing that we can possess the living God within the Church, thus turning our faith into idolatry and our priests into a cast retaining the exclusive right to manage the Church. We must always remember that Lex credendi (the law of believing) and Lex orandi (the law of praying) are an integral part of Lex sequendi: the call to follow the naked Christ (saint Colombanus). For man is called to be the image of God, not an idol; Stone altars are not important, only living altars are.

Those three days full of reflection, dialogue, prayer, informal exchanges – in particular with Metropolitan Stephanos of Estonia, Bishop Jean of Charioupolis (Ecumenical Patriarchate), Bishop Marc (Romanian Patriarchate, Bordeaux, France) and Bishop Nestor (Moscow Patriarchate, Paris, France), were intense with fraternity; we truly shared an ecclesial communion, respecting the rich diversity of persons, their various jurisdictional denominations and their points of view, as well as having the opportunity to fully experience our unity in Christ. Ceaselessly the joy of the Resurrection was proclaimed, sung and lived throughout the congress, without losing sight of the Christians’ situation throughout the world, inviting every one of us to spread the joy we received as soon as we had returned to our every day lives.

The proceedings of the congress (texts of the conferences, reports of workshops and round tables) will be soon published in French in the Orthodox journal Contacts (www.revue-contacts.com). Non-subscribers can order the volume in advance, by sending a cheque of 13 Euro to Revue Contacts, 61 all e du Bois du Vincin,56000 Vannes, France.

(N.B. We do not yet know how the English version of the proceedings will be published. It might take a little more time than the French version. We shall let you know as soon as possible.)