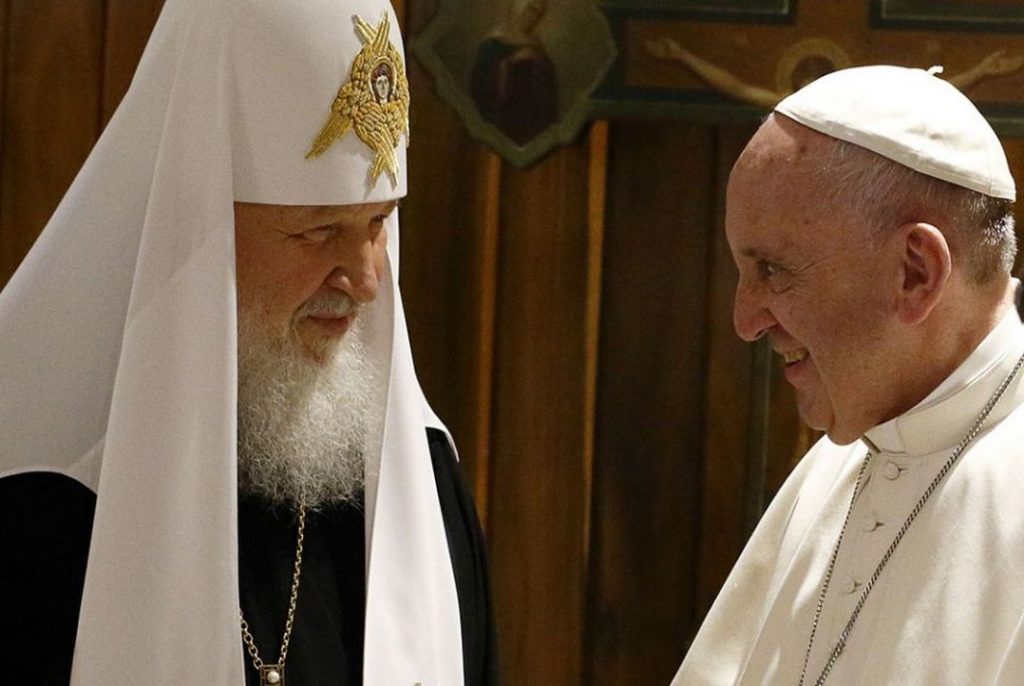 In the midst of the COVID-19 pandemic, Pope Francis March 27 characterized the worldwide trauma as: “God’s call on people to judge what is most important to them and resolve to act accordingly from now on.” Can this occasion also be a time of deeper communion among us?

Catholics, Orthodox and Oriental Orthodox hierarchs, pastors and faithful agree that the Eucharist, the body and blood of the Son of God, is the most precious gift of God to the church.  It is of paramount importance to us!

Nevertheless, while sharing the same belief in the supreme importance of the Eucharist, we still refrain from sharing the bread and cup with each other because of doctrinal divergences.

Perhaps this pandemic is an occasion for those committed to fostering the unity of Christians to consider a leap forward: Would the Catholic, Orthodox and Oriental Orthodox Churches consider an expansion of sacramental sharing, especially eucharistic sharing, on a reciprocal, ordinary basis? 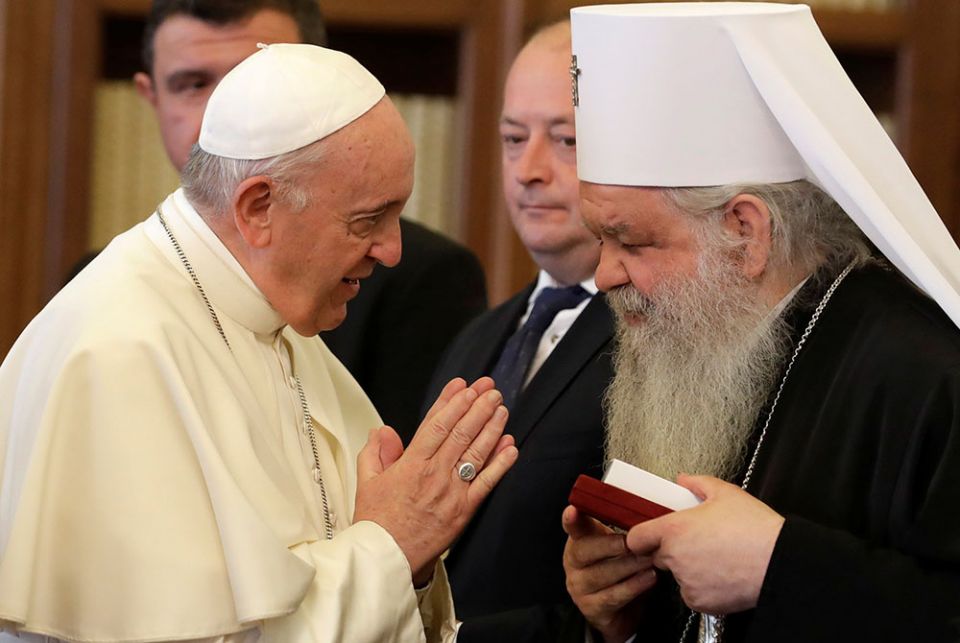 Pope Francis talks with Archbishop Stefan of Skopje, spiritual head of the Macedonian Orthodox Church, at the Vatican May 24, 2019. (CNS/Andrew Medichini, pool via Reuters)

A basis for such consideration can be gleaned from the common declarations and statements already issued by the churches. For example, the 1996 Armenian and Catholic Common Declaration stated that the leaders of the two communities, Pope John Paul II and Catholicos Karekin I, recognized “the deep spiritual communion which already unites them and the Bishops, clergy and lay faithful of their Churches.”

“Because of the fundamental common faith in God and in Jesus Christ, the controversies and unhappy divisions which sometimes have followed upon the divergent ways in expressing it … should not continue to influence the life and witness of the Church today,” said the declaration.

Additional doctrinal agreements may not be required for the provisions of sacramental sharing to be expanded. The phrase “almost perfect unity” and similar language have been used for decades in various forms in common declarations.

The mere existence of the current provisions in Catholic canon law allowing eucharistic sharing with the Orthodox under certain conditions is an indicator that the Catholic Church believes that there is sufficient doctrinal agreement for some form of sacramental sharing (known in Catholic parlance as communicatio in sacris), albeit it on an exceptional basis.

Doctrinal accords should not be the only concern used as an accurate indicator of when full communion has been achieved.

We must recall that doctrinal and disciplinary accords were reached between the East and West at the Second Council of Lyon (1274) and the Council of Florence (1431-1449), only to disintegrate shortly thereafter because real full communion had not been achieved. Accords had been articulated and signed, but communion had not been established. In the modern world, the Holy Spirit has seen fit to restore “almost perfect communion” without having yet achieved complete doctrinal consensus.

Pope Francis offered a similar approach in a May 2018 audience at the Vatican with a delegation from the Patriarchate of Moscow.

“Ecumenism is made by journeying,” said the pontiff. “We walk. Some think — but this is not right — that there must first be doctrinal agreement, on all the points of division, and then the journey.”

“We must continue to study theology, to clarify the points, but in the meantime let us walk together, let us not wait for these things to be resolved in order to walk,” he said.

Catholic canon law in the 1990 Code of Canons of the Eastern Churches (and its counterpart the 1983 Code of Canon Law for the Latin Church) already provides for sacramental sharing in extraordinary circumstances:

These pastoral accommodations are consequences of the Second Vatican Council and truly mark a notable transformation in the relations among our churches. Nevertheless, these norms of the Catholic Church are deficient in certain ways.

While discussions would best take place in the context of the ecumenical dialogues, perhaps a bilateral approach, i.e., the Catholic Church along with another Orthodox or Oriental Orthodox Church, is the best that can be achieved at this time that would allow for a gradual expansion of sacramental sharing.

It should be understood that an expansion of sacramental sharing with one church would not be indicative of a greater degree of communion with the Catholic Church. Such an approach would recognize the distinct issues of each church. In any case, a differentiated approach to sacramental sharing (e.g., baptism, Eucharist, and marriage) is actually the current arrangement.

The second deficiency is that they are exceptional. Prescinding from the issue of concelebration among bishops and priests, could not the faithful be permitted to receive a sacrament from the minister of another church simply for a just cause?

Indifferentism and false irenicism are to be avoided. Nonetheless, in this present worldwide crisis, could receiving communion in Orthodox and Catholic Churches by the faithful of these churches be a new sign of closeness and desire for full communion?

The hierarchies of our respective churches will continue to teach that our churches are not yet in full communion nor are all the doctrinal disagreements resolved, and that they will commit themselves to journey together seeking a common understanding of the mystery of salvation.

Nonetheless, we should pray that Divine Providence will transform some of the disagreements into mere differences.

An expansion of sacramental sharing would mean that the Eucharist would no longer be a bellwether of division, but rather a sign of the ecclesial communion that already exists. We shall continue the journey together — to use the image of Pope Francis — to full communion, knowing that it will be achieved only ultimately when we see the Lord.