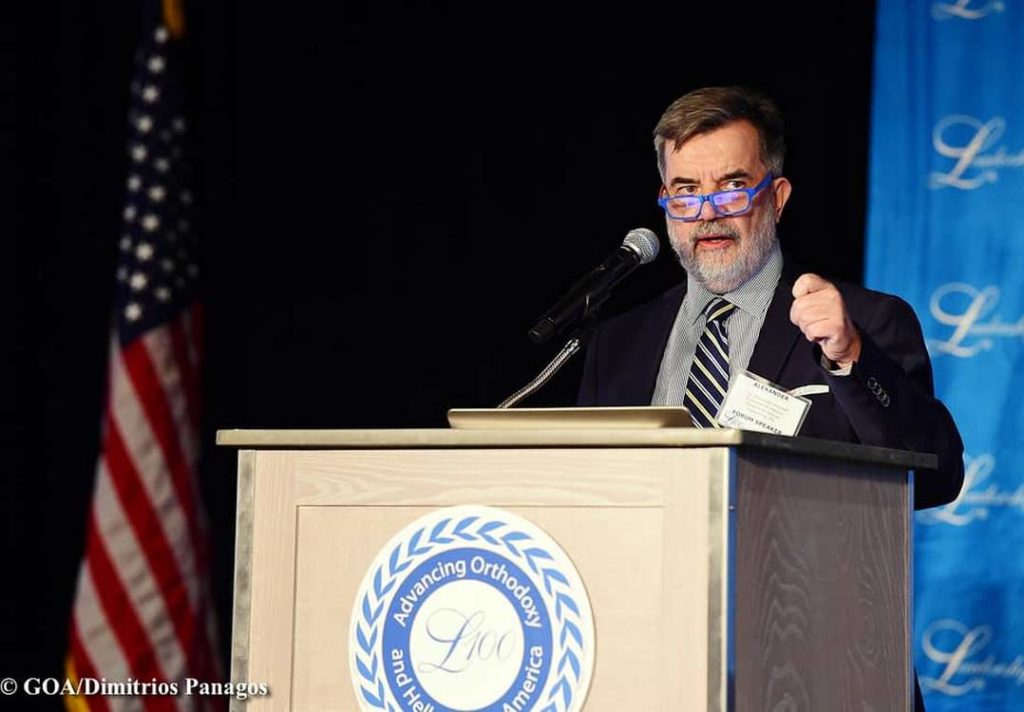 I attended the recent Leadership 100 conference that took place in Florida. I was invited there to give a lecture on the one-hundred-year history of the Archdiocese and to receive an award for which I am very grateful. But I am also grateful for all I learned while attending the conference. I thought that Leadership 100 was simply about rich people who give money to our Church. But now I know better.

Leadership 100 is composed of persons who can afford to donate the sum of $100,000 over a period of ten years to the Greek Orthodox Archdiocese of America. It was founded in 1984 by Archbishop Iakovos as a means of funding the Archdiocese’s initiatives without forcing parishes to increase their dues. It is one of the most important Greek-American philanthropic institution. Its members must have heard of the saying that it is much more difficult to spend money on philanthropic causes than it is to earn it in the first place.

At this year’s conference I witnessed a set of presentations whose professionalism and sophistication matched their profound commitment to the dual causes of Orthodoxy and Hellenism in America. The conference combined a passion for goodwill with a judicious sense of what is worth supporting.

The Archdiocese, the governing body of Greek Orthodoxy in America, shoulders the responsibility of nurturing religion through the churches and its young adult and youth ministries, and also administering a network of Greek schools and philanthropic projects through the Ladies Philoptochos. One the one hand this range of activities has made the church the most important Greek-American institution. On the other hand, this also represents a huge burden under which the Archdiocese has staggered in trying to sustain several times during its existence.

The visionary Archbishop Iakovos had already led the church through the 1960s and the 1970s, a period in which Greek Americans were steadily assimilating. With the church’s adherents becoming wealthier, more educated, and more worldly, Iakovos realized that the range of activities the church undertook had to be upgraded and keep up with the times. “We are no longer an immigrant church” was one of his more frequent sayings. And his solution was to create Leadership 100 to help the Archdiocese keep up with the times.

Yet its role is not simply to write a blank check to church. Instead, it considers cases put forward by the various departments of the Archdiocese and awards grants based on the merit of the application and the needs of the church in a particular area. It also hears and monitors projects it has funded.

For example, this year the conference heard of an ongoing project on the modernization of the Archdiocese’s technology. Apparently, this area of the Archdiocese’s functioning had been neglected and there was a lot of catching up to do. But the presentation outlined a vision that reminded me of the sophisticated software and computer networking systems applied by colleges and universities which are more at home with cutting edge technology.

Two other presentations, by means of vivid use of slides, video clips, and film outlined plans for the renovation and transformation of Ionian Village, the Archdiocese’ international summer camp – camping ministry to use the Archdiocese’s term – which is located on the Ionian coast of Peloponnesos, and of St. Michael’s Home, the Archdiocese’s adult care facility in Yonkers, NY.

These presentations were made in the forum section of the conference, when the general assembly heard reports from Leadership 100’s committees. Also reporting to general assembly was George M. Cantonis, the president of Hellenic College/Holy Cross. He spoke about the massive effort that is underway to upgrade those beleaguered twin institutions that are so pivotal to Greek America and Greek Orthodoxy. The aim is to streamline them according to the highest standards of American academe. The upgrade is in its early phases, but it is already bearing fruit.

I left the conference with Iakovos’ words echoing in my head, “we are no longer an immigrant church.” Leadership 100 can take much of the credit for the Church’s continued transformation away from what existed before. Prior to this year’s conference and since its inception it had distributed a total of over sixty-five million dollars in grants. Now, led by its Executive Director Paulette Poulos, all that Leadership 100 needs to do is to continue to find ways to help the Archdiocese keep up with the changing face of Greek America.