[ditty_news_ticker id="27897"] “A WORRYING SILENCE PREVAILS IN MOST OF THE ORTHODOX CHURCHES” — ABP. OF ALBANIA CALLS FOR URGENT PAN-ORTHODOX COUNCIL - Orthodox Christian Laity 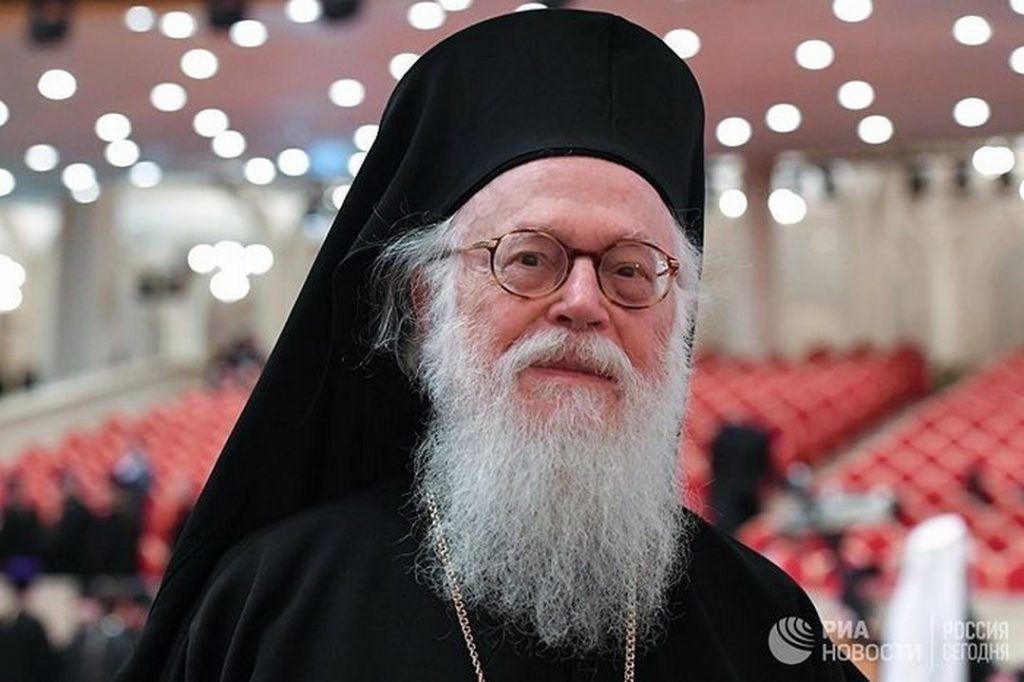 [Tirana, Albania, November 25, 2019] Time does not heal schisms, but only sets them in stone, His Beatitude Archbishop Anastasios of Albania believes. Therefore, in the spirit of the coming great feast of the Nativity of Christ, all the Local Orthodox Churches must agree to come together to find a pan-Orthodox resolution to the ongoing Ukrainian crisis, he states.

However, at present, “a worrying silence prevails in most of the Orthodox Churches,” the Archbishop laments.

His Beatitude’s statement, “In anticipation of Christmas 2019 Appeal-Supplication for the overcoming of the ecclesiastical polarization,” is published in full in English and Greek on the official site of the Albanian Orthodox Church.

The content of his statement is largely reminiscent of previous statements and letters to His Holiness Patriarch Kirill and Patriarch Bartholomew, though, as His Beatitude notes, the problem has only become more acute in the intervening months and the fragmentation in the Church has only compounded. Abp. Anastasios called on Pat. Bartholomew to convene a pan-Orthodox council already in January.

His letter prompted a curt response from Pat. Bartholomew, to which Abp. Anastasios again responded, focusing on the holy Eucharist, Apostolic Succession, and conciliarity.

Much has been written about the Ukrainian problem over the past months, but “What is most crucial and most necessary, however, is to emphasize Orthodoxy’s imperative of unity,” Abp. Anasatasios writes, adding the words of the great St. John Chrysostom: “The name of the Church is not one of separation, but of union and concord. The Church came into being, not that we might be divided, but that we might be joined together,” and, “Nothing exasperates God so much as a Church divided.”

A “new reality” has emerged from the ecclesiastical events of the past year, “with the obvious involvement of geopolitical interests and expediences.” Moreover, the granting of autocephaly to the so-called “Orthodox Church of Ukraine” “has not brought the desired Orthodox unity and peace,” the Albanian primate writes, “as happened with all previous cases of granting Autocephaly.”

Even “Patriarch” Philaret, long the central figure of the Ukrainian schismatic-autocephalous movement has rejected the tomos, and the divisions have only spread further, His Beatitude writes.

“At the same time, the supreme sacrament of unity and forgiveness—the Holy Eucharist—has been used by the Patriarchate of Moscow during the confrontation as a means of applying pressure,” Abp. Anastasios believes.

Recall that Pat. Bartholomew broke communion with Archbishop Christodoulos of Athens over the issue of electing new bishops for the New Lands dioceses, and he threatened to revoke the tomos of autocephaly from the Church of the Czech Lands and Slovakia because it commemorated the anniversary of its autocephaly received from the Moscow Patriarchate in 1951.

“For the moment, a worrying silence prevails in most of the Orthodox Churches,” he continues, noting that political pressure on both sides is wounding the spiritual authority of the Orthodox Church. Moreover, “irresponsible persons” deride those who express differing opinions and flatter those whom they support, thereby debasing inter-Orthodox dialogue.

Today we are faced with a “resulting ethnoracial fragmentation (into Greeks, Slavs, and those who desire harmonious relations with all),” the Archbishop lament. “Time does not necessarily correct and heal ecclesiastical schisms; rather, it deepens and perpetuates them,” he adds.

“Finding ways to transcend this ecclesiastical polarisation is now a matter of urgency,” he writes, which must begin with de-escalation. Every attempt to resume dialogue between the primary parties must be made. We must follow the Lord’s commands to forgive and love, and “we will discern new pathways to overcoming the violence.”

“Solutions exist,” he is sure, but they won’t come from insulting texts or outside interference, and “every delay deteriorates the already painful situation.”

The only answer is conciliarity, Abp. Anastasios emphasizes, as have so many other Orthodox primates, Synods, and hierarchs: “The fundamental principle of Conciliarity, which has always underlain the advancement of the Orthodox Church, is the only key to finding a way out of the existing crisis. Gathering together in the Holy Spirit, in mutual respect and with the sole aim of finding a peaceful arrangement, we have the possibility of reaching a solution acceptable to the whole Orthodox Church.”

Any delay only threatens more fissures in the Body of the Church, and modern technology “intensifies the clamor, the confusion, and the turmoil among the Orthodox.”

With the approaching feast of the Nativity, “the amazing initiative of the Father for the reconciliation with the human race,” His Beatitude calls for a “hastening of the steps towards reconciliation.”

While all the Local Churches bear responsibility for contributing to reconciliation, “The initiative for the healing treatment of the new reality undoubtedly is accorded to the Ecumenical Patriarchate.”

Abp. Anastasios’ appeal is dated November 20, before His Beatitude Patriarch Theophilos of Jerusalem announced his invitation to the primates to gather in Jordan to discuss issues of unity, but given his belief that Pat. Bartholomew must call such a council, it is unlikely that Abp. Anastasios will support Pat. Theophilos’ initiative.

Archbishop Ieronymos of Athens has already announced that he will not attend a council called by anyone other than Pat. Bartholomew.

However, Pat. Bartholomew has already made it clear several times over that he has no intentions of calling a council to discuss the Ukrainian issue and to restore Church unity.

In a statement published by Romfea yesterday, His Eminence Metropolitan Seraphim of Zimbabwe of the Patriarchate of Alexandria praises Abp. Anastasios and his initiative, calling him one of the leading Orthodox theologians and missionaries.

“His undying love and his anxiety for the unity of Orthodoxy must be respected by all of us and we should all begin our unceasing prayers … in our dream of celebrating the Birth of Christ in unity,” he writes.

The unity of which Abp. Anastasios writes depends not thousands or even hundreds of people, writes Met. Seraphim, but on Patriarchs Kirill and Bartholomew alone.

In his view, they must jointly propose the establishment of a Joint Committee to consider the Ukrainian question for several months or a year, and if the Joint Committee cannot arrive at a joint proposal, then the Special Committee of the Holy and Great Synod should resume its work discussing the topic of how to grant autocephaly, picking up where it left off.

Met. Seraphim previously stated that the lack of dialogue on Ukraine threatens to isolate Constantinople and shatter the Church’s unity.