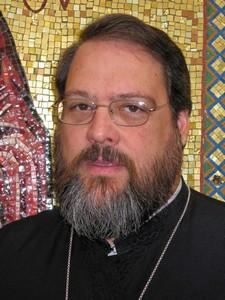 JOHNSTOWN, PA — With thankfulness to Almighty God, the [American Carpatho-Russian Orthodox] Diocesan Chancery has announced that a Special Assembly of Diocesan Priests will be convened on Saturday July 14, 2012 in Christ the Saviour Cathedral by His Eminence, Archbishop Demetrios of America, Diocesan Locum Tenens for the purpose of nominating a candidate for ruling Bishop of the American Carpatho-Russian Orthodox Diocese of the U.S.A.

]The calling of the Assembly follows a year-long search for a worthy candidate to succeed to the throne of our beloved late Metropolitan of Amissos, the Most Reverend Nicholas R. Smisko

After a diligent search both within and outside the Diocese, with the blessing of Archbishop Demetrios of America, our Diocesan Locum tenens and Exarch of the Ecumenical Patriarchate, a worthy candidate has been found in the person of the Very Rev. Archimandrite Grigorios Tatsis.

Father Grigorios is American-born of parents of Greek origin. He is currently serving as Dean of the Holy Trinity Greek Orthodox Cathedral in New Orleans, LA. He is a well-educated and well-respected priest who is willing to accept the call to lead the Diocese in the years to come in accordance with all its venerable Carpatho-Russian traditions, which under the omophorion of the Ecumenical Patriarchate have been preserved at the highest level of respect and honor.

Since Father Tatsis is not known to the members of the Diocese, there will be an opportunity for our diocesan priests to meet and speak with him before the Special Assembly. He will be at Camp Nazareth for the day on Sunday, June 10, 2012 at the celebration of Family Day, and at St. George’s Church in Taylor, PA on Tuesday, June 19, 2012 at 11:00 AM. A cordial invitation is extended to all diocesan priests, to come to one of these locations and meet with Father Grigorios.

The Assembly will begin at 9:00 am on Saturday July 14, 2012 with the celebration of Divine Liturgy. Following Liturgy, seeking the guidance of the Holy Spirit, the Diocesan priests will cast their votes for a successor to Metropolitan Nicholas. In addition to Fr. Tatsis, other worthy candidates may be considered from amongst names submitted for consideration by diocesan clergy in advance of the Special Assembly. The Archbishop will formally designate the candidate receiving the majority of ballots as the nominee and submit his name to the Ecumenical Patriarchate for Canonical Election.

Lay representatives from our Diocesan parishes are invited to be in attendance to witness this historic event in the life of the diocese.