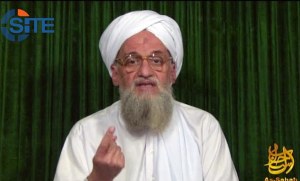 The leader of Al-Qaeda, Ayman Al-Zawahiri, released a recorded audio message on Friday, in which he accused various parties of conspiring to overthrow former president Mohamed Morsi.
(AFP File Photo)

Ayman al-Zawahiri, the Egyptian who has led Al-Qaeda since the death of Osama bin Laden, said in a video that the United States and the leader of the Coptic Orthodox Church were part of a conspiracy to oust President Mohamed Morsi, according to a report in an Egyptian newspaper.

The terrorist leader’s comments, made on August 2, inspired a spate of violence against Christians throughout Egypt.

Coptic Catholic Bishop Kamal Fahim Awad (Boutros) Hanna told the Fides news agency that “Christians are likely to once again become the scapegoat of the tensions in the country.”

“It is now clear that the Islamist violence will be addressed more and more against Copts,” he added. “Appropriate countermeasures are necessary, for example by increasing the protection of churches by security forces.”