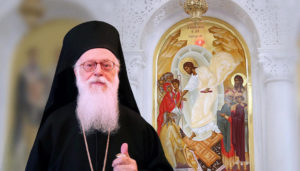 His Beatitude Archbishop Anastasios of Tirana, Durrës and All Albania

How reasoned and gentle are these responses by the Albanian Church? Well worth reading now and I suspect these letters will be read many years from now when this unpleasantness is written about by historians.

On the 22nd of November, 2018, Russian sources released selected excerpts [and even some websites published articles with manipulative titles, dates, and arbitrary assessments]  from the letter by His Beatitude Anastasios, the Archbishop of Tirana, Durres and All Albania to His Beatitude Kirill, the Patriarch of Moscow and Αll Russia.

For the purpose of providing fuller and objective information to anyone who takes interest, we publish the unabridged text of the aforementioned reply of His Beatitude Anastasios (of the 10th of October, 2018), together with that of His second letter (of the 7th of November, 2018), in both the original and the respective English translation.

Nr. Prot. 747/18
† Anastasios
Archbishop of Tirana, Durres and all Albania

To His Beatitude, Holy Brother in the Lord, the Patriarch of Moscow and All Russia KIRILL

Dearest Brother in Christ and Co-celebrant,

“The grace of our Lord Jesus Christ and the love of God the Father and the communion of the Holy Spirit” be with all Orthodox.

We thank You warmly for the dispatch of Your brotherly letter of October 1st, 2018. We read, with special interest and great care, the analytical account of what has happened, so far, with respect to the critical subject of the Church of Ukraine. Upon return from a brief journey to Crete and Athens, we convened the Holy Synod of the Orthodox Autocephalous Church of Albania, on the 9th of October and deliberated on this complex ecclesiastical issue.

We limit ourselves to the following concise remarks: During the official briefing of our Church by representatives of the Ecumenical Patriarchate (30th July of this year), consisting of their Eminences Metropolitans Ioannis of Pergamos, Emmanuel of France, and Bartholomew of Smyrna, we expressed the following views: We are afraid that the current plan, for granting the status of autocephaly to Ukraine, will be “a march into a minefield”. It is similar to a dangerous surgery of uncertain results. The embattled groups will maintain their existence and their solidarity, as it has often happened in various local Churches. Finally, instead of achieving the unity of the Orthodox in the Ukraine, we discern the danger of breaking up the unity of Orthodoxy in the oikumene.

At the same time, we underlined that the most important and blessed achievements of Orthodoxy in the last decades are the Synaxes of the Primates of the Orthodox Autocephalous Churches and the associated Co- celebrations of the Holy Liturgy, which stressed the Pan-Orthodox unity; as well as, the convening of the Holy and Great Synod of the Orthodox Church, which was unanimously decided at Chambésy (January 2016) and finally took place in Crete.

The Orthodox Church of Albania accords primary importance to the unity of Orthodoxy and the dynamic witness of the Gospel, both among the traditional Orthodox people and the entire oikumene. All other issues should be faced with insightful discretion, constant prayer, and patient dialogue.

We repeated these views, with great respect and deep love, to His All Holiness the Ecumenical Patriarch Bartholomew during our recent meeting on the island of Crete.

The last developments, which You describe in Your letter, have unfortunately aggravated tensions and concern. Please allow me to note that the recent decision of the Church of Russia to discontinue the liturgical reference to the Ecumenical Patriarch and to interrupt the eucharistic communion with the Patriarchate of Constantinople, which was announced on the 14th of September, has dangerously complicated the whole matter. Particularly because it touches the core of Orthodox Unity, the Holy Eucharist, during which we proclaim the unity of the Orthodox Church and we pray for its preservation.

Concerning the conclusion of Your Brotherly letter, we assure You that we never cease offering warm supplications for the unity of our Holy Church, which our Lord Jesus Christ, her Head, “bought with His own blood” (Acts 20:28). But we have serious reservations, whether in this period raising our voice is of priority; we consider preferable an insistent, discretionary request to avoid hasty actions.

On the other hand, “a pan-Orthodox consultation” on the Ukraine question, which we had discussed during Your blessed visit to Albania, following the interruption of the communion of the Church of Russia with the Ecumenical Patriarchate, has become extremely difficult. Who will take the initiative to convene the Orthodox Autocephalous Churches, when there exists the discontinuation of the liturgical reference to the Ecumenical Patriarch? What will the Agenda be? How will the deliberations proceed? What criteria will prevail in taking the final decisions?

Under the present circumstances it would be desirable to initiate a calm dialogue among the parties directly concerned and search for a common solution, addressing the healing of wounds from the prolonged atheistic persecution, the schisms, and the galloping proselytism. Should those concerned, accept the participation of other Orthodox Autocephalous Churches, in an effort towards this direction, so much the better. The Orthodox Church of Albania is ready to participate.

Generally, I feel the need to reassure that our modesty “will do everything possible, in order to avert a schism within Ecumenical Orthodoxy”. Such an event would constitute a painful trauma to the credibility of Orthodoxy and must be avoided at all costs. For, we unshakably continue to believe in the basic theological proclamation, which we have repeated for decades in the inter-Christian dialogue, that the Orthodox Church is the One, Holy, Catholic, and Apostolic Church and not a confederation of local Churches. Any form of schism weakens the Orthodox witness in the contemporary oikumene, hurts the credibility of the Orthodox Church, and generally traumatizes the prestige of the Christian world.

The martyred Church of Albania, whose resurrectional course You so generously praise, is convinced that the duty of re-evangelism, of the strengthening of our faith in Christ is of absolute priority for all local Churches. The great opponents of Orthodoxy today are lack of faith, indifference, atheism, and militant secularism. Under present world conditions, we consider that various “canonical” matters should also be examined from this point of view.

Even if it seems impossible, we believe that we should all “do our utmost” to return to the Synaxes of the Primates of the Orthodox Churches and to a new Great Synod. We do know that these proposals may be considered by some as unrealistic and finally unattainable. However, I do believe that no one is a ‘realist’, unless he believes in the miracle: and that, “The things which are impossible with men are possible with God” (Luke 18:27).

In conclusion, the unbreakable unity of Orthodoxy and the duty of giving a convincing witness to the contemporary world, remain the irreplaceable criteria for facing the particular, although acute, problems.

To His Beatitude, Holy Brother in the Lord, the Patriarch of Moscow and All Russia KIRILL

Dearest Brother in Christ and Co-celebrant,

“My soul is sorrowful”. A deep pain, worry and embarrassment engulf us too, as we follow the developments in the Ukrainian issue, after the decisions of the Ecumenical Patriarchate (11.10.2018) and of the Orthodox Church of Russia (15.10.2018), which You record in Your letter of the 29th of October 2018.

Unfortunately, they corroborate the fears we had expressed to the representatives of the Ecumenical Patriarchate (30th of June 2018), namely that the currently planned granting of autocephaly to Ukraine will be a “march in a minefield” with painful repercussions for all.

At the same time, however, we ought to remark that the latest decision of the Church of Russia is also a source of great concern. It is unthinkable that the Divine Eucharist, the mystery par excellence of the infinite love and the utter humiliation of Christ, could be used as a weapon against another Church. Is it possible that the decision and order of the Hierarchy of the Church of Russia may cancel the energy of the Holy Spirit in the holy Orthodox churches that operate under the jurisdiction of the Ecumenical Patriarchate? Is it possible that the Divine Eucharist performed in the churches of Asia Minor, Crete, the Holy Mountain, and elsewhere on earth, may now become unsubstantiated for the faithful Russian Orthodox? And if they come forth “with the fear of God, faith, and love” to partake of the Sacred Gifts, is it possible that they commit “a sin”, which they should confess?

We proclaim that it is impossible for us to agree to such decisions. It is imperative that the Holy Eucharist, this mystery of unfathomable sacredness and unique importance, remains far removed from all ecclesiastical disagreements.

However serious they may be, the accumulated questions of jurisdiction on no account may constitute a cause for a Schism of Orthodoxy, anywhere in the world. As we have repeatedly stressed, a possible SCHISM now, will tarnish the beauty of Orthodoxy, will weaken its international prestige, and will deeply hurt the faith of all Orthodox – especially of those in the Ukraine, who are of immediate concern – who suffer continuous pressures from multiform atheism and are poisoned by indifference, spread around like radioactive dust.

It is, therefore, imperative to explore calmly a compromise, aiming at a deep and real pacification of the Orthodox faithful in Ukraine.

Regarding the Pan-Orthodox Synaxis that You mention in Your letter, we consider that the recent developments have made its convocation extremely difficult. The following questions remain crucial: Will the Orthodox Church of Russia ask the Ecumenical Patriarchate to convene a Pan-Orthodox Synaxis? What will be the criteria of a final decision in favor of peace and unity? The Orthodox Autocephalous Church of Albania is, in any case, willing to participate in a Pan-Orthodox Synaxis, which will be convoked canonically.

You know our repeatedly mentioned conviction that the most blessed achievements of Orthodoxy during recent decades were the Synaxes of the Primates of the Orthodox Autocephalous Churches. May we return to them, correcting the omissions and mistakes of the past.

The worry and embarrassment, which we initially formulated, are healed in a paracletic way by the psaltic verse: “Why are thou cast down, O my soul? And why art thou disquieted within me? Hope thou in God: for I shall yet praise him, who is the health of my countenance and my God”. (Psalm 42:11).

In Christ our only Lord and Savior,