[ditty_news_ticker id="27897"] Almost 300,000 People Venerated the Belt of the Mother of God in Moscow, over 2 Million People in Russia - Orthodox Christian Laity 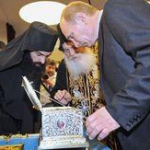 Vladimir Putin, Russian Prime Minister, venerating the belt of the Mother of God

Moscow, November 28, Interfax – About 285 thousand people venerated the Belt of the Holy Virgin during its stay in the Russian Orthodox Cathedral of Christ the Savior, Headquarters for its stay in the capital told Interfax-Religion.

Tens of thousands of believers stand in the line to the church. Average time of waiting for access to the church is 24 hours. Not only Muscovites, but people from regions came to venerate the shrine.

691 buses with pilgrims have arrived at the cathedral for the time of the shrine’s stay since November 19.

Today, there are 133 buses where pilgrims can get warm, pilgrims are given free hot tea and porridge, 69 feed points and 440 toilets are functioning.

The Foundation of St. Andrew the First-Called first brought the shrine to Russian St. Petersburg from Vatopedi Monastery on Athos on October 20. After “the North capital” the Belt was brought to Yekaterinburg, Norilsk, Vladivostok, Krasnoyarsk, Tyumen, Nizny Novgorod, Diveyevo, Saransk, Samara, Volgograd, Rostov-on-Don, Stavropol, Kaliningrad, Moscow. First the shrine should have returned to Athos on November 23, but the term of its stay in Russia was prolonged until November 27 as many people desired to venerate it.

Orthodox believers in Russia are sure that the country is under special protection of the Mother of God. Russian Prime Minister Vladimir Putin, Russian President Dmitry Medvedev with his spouse and other politicians have earlier venerated the Belt.

Over 2 millions of people have venerated the shrine during its stay in Russia.

For many years Vatopedi monks have done small belts, blessed them on the belt of the Mother of God and spread among the believers. As usual they take a bobbin with 300 meters of ribbon, which is blessed on the reliquary with a special prayer. Then the bobbin is handed over to the monks: they divide the fabric for meter and a half belts, twist them and put into plastic bags together with the text telling about the shrine and instructions how to pray and observe fast.

Orthodox believe that thanks to intercession of the Holy Virgin these belts help cure female infertility, bear and give birth to a healthy child. As the belt of the Mother of God is kept on Athos where women are not allowed, Russian women have a rare chance to kneel down before the shrine, pray for granting children, health to relatives and friends and prosperity to Russia.