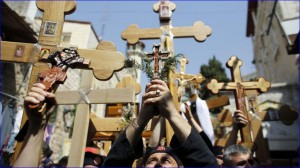 Orthodox Christian worshippers hold crosses as they take part in the Eastern and Orthodox Church’s Good Friday procession along the Via Dolorosa in Jerusalem’s Old City (photo: Reuters).

On Wednesday, May 7, history is being made. On behalf of the suffering churches of Egypt, Iraq and Syria, a broad array of American Christians, with a degree of unity rarely seen since the Council of Nicaea in 325, have joined together in a “pledge of solidarity and call to action.”

In the “We the People” tradition, the pledge is a grass roots effort, with input from many sources. It is being released publicly on Wednesday morning by Reps. Frank Wolf (R-Va.) and Anna Eshoo (D-Calif.), but it does not have any particular institutional sponsor nor a political leader spearheading it.

They include many lay civic society leaders, including Robert George of Princeton University, Jim Wallis of Sojourners, George Weigel of the Ethics and Public Policy Center, journalist Kirsten Powers, George Marlin, chair of Aid to the Church in Need-USA, and Lynne Hybels of Global Engagement of the Willow Creek Church.

These Christian leaders have come together across faith traditions and political affiliations in response to the increasingly dire appeals from Middle Eastern Christians. As Baghdad’s Catholic Chaldean Patriarch Louis Sako recently cried out: “We feel forgotten and isolated. We sometimes wonder, if they kill us all, what would be the reaction of Christians in the West? Would they do something then?”

As the pledge recounts:

“While Christians have been leaving the Middle East for many years, and, in these three countries, members of all communities–including smaller religious communities and Muslims–suffer from violence and political turmoil, the Egyptian, Iraqi and Syrian Christian communities, under the additional scourge of intensifying religious extremism, are experiencing a sudden, massive exodus of their members from the region.”

With the rise of Islamist extremists, this situation has become so acute that, regarding the Christians, it is not only individuals who are threatened. The presence of the entire Christian community in the region of its birth is at stake. The pledge emphasizes:

“Since these communities account for most of the indigenous Christians in today’s Middle East, the continued presence of Christians in the region where Christianity originated 2,000 years ago is threatened.”

The pledge states that Egypt, Iraq and Syria have seen “scores of churches deliberately destroyed, many clergy and laypeople targeted for death, kidnapping, intimidation and forcible conversion, and hundreds of thousands of believers driven from their countries.”

Specific patterns of attacks detailed in the pledge include:

The American Christian leaders who signed the pledge commit to work within their congregations and communities to pray, educate and engage in foreign policy on behalf of these endangered fellow Christians and the other small religious groups who are similarly vulnerable.

Asking “all people of good will” to join this effort, they also call on America’s elected leaders to act to adopt three specific diplomatic and foreign and humanitarian aid steps.

While promoting religious freedom is already a key objective of U.S. foreign policy, as the pledge concludes, “now, new action is desperately needed by our churches, our government and our civil society institutions here in the United States, and by all people of good will to make that objective a reality.”

Nina Shea is director of the Hudson Institute’s Center for Religious Freedom. She is co-author of “Persecuted: The Global Assault on Christians” (Thomas Nelson 2013).