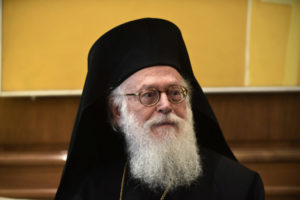 Archbishop of Tirana, Durres and all Albania Anastasios. (Photo by Eurokinissi)

The Resurrection Cathedral currently stands as the third-largest Orthodox church in Europe. This was nothing less than a miraculous accomplishment considering Albania, a very poor country, was not that long ago under the grips of communism and fiercely anti-Christian. Yet, in a largely Muslim country, Archbishop Anastasios has managed to revitalize the Orthodox Church, building new churches and restoring many others without the benefit  of the Port Authority of New York handing over millions of dollars for construction, which is what happened with St. Nicholas Church in Lower Manhattan. That is in addition to the millions donated by the faithful. Despite all this, St. Nicholas has yet to be completed as corruption enveloped the Greek Orthodox Archdiocese. “Archbishop” Demetrios apparently wants to stay until St. Nicholas is completed? Why? Does he actually believe this will be his legacy? Is this man so naive as to compare his corruption-filled tenure to a true giant of Orthodoxy as an Anastasios? This is simply laughable.

The parishes need to follow the example of Sts. Constantine and Helen in Wisconsin and immediately stop funding the corruption at the Archdiocese until proper hierarchs are put into place, as the only thing they understand is money. Thankfully, there is no shortage of qualified metropolitans.

Metropolitan Elpidoforos may be the best example of a talented young hierarch who can come to the United States and bring some order. He would restore morale, build church ministries that have been destroyed under Demetrios, and energize the faithful by being honest and transparent. In any case, he wouldn’t cover up one incident after another, he wouldn’t accept two salaries, and I am confident that he would immediately defrock priests that sexually abused children.

“Bishop” Andonios of Phasiane, who is the Archdiocesan Chancellor, is also completely incompetent and virtually unemployable outside the bubble of the Greek Orthodox Archdiocese, and also can be easily replaced. At this point, why would any reasonable person believe that changes being instituted by Michael Psaros and others at the Archdiocese would have any positive effect when the two individuals responsible for this wreck are still at the Archdiocese continuing to live off of the donations of the faithful- essentially on welfare. Who are they kidding?