When faith dies man gradually loses the knowledge that he was created by God and so he loses himself.

Pope Benedict’s rare insight and erudition of the Eastern patrimony strengthens both West and East and many Orthodox believers are grateful for it. May God grant us more teachers like him. May his remaining years bear much fruit. We still need him. 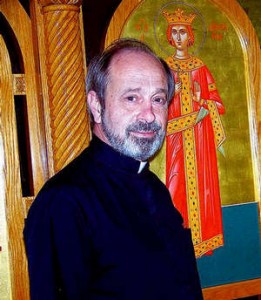 Fr. Johannes L. Jacobse is an Orthodox priest serving in Naples, FL. He is President of the American Orthodox Institute and blogs at www.aoiusa.org/blog.

NAPLES, FL. (Catholic Online) – Like almost everyone, the resignation of Pope Benedict came as a shock to Orthodox believers. Those of us who have watched Pope Benedict and his predecessor Pope John Paul II work to lessen the estrangement between the Catholic and Orthodox Churches hope that Pope Benedict’s successor will continue on the same path.

Two things stand out in Pope Benedict’s relationship with the Orthodox Churches. First is his deep understanding of the Christian patrimony of Christendom. The Christian foundation of culture should be self-evident to most, but in our post-Christian (and poorly catechized) age our historical memory has grown increasingly dim.

The loss of this Christian cultural awareness has created a moral crisis of the first order. When faith dies man gradually loses the knowledge that he was created by God and so he loses himself. Only through concrete, existential encounter with the Risen Christ can man come to know God in the full measure of God’s self-revelation to him through Jesus Christ. And only in this relationship can man learn what it is to be truly human.

Any kind of decline follows contours that are specific to the culture within which the decline occurs. In our technological age we tend to see man as a machine and the self-organization of society as strictly a rational enterprise. In the simplest terms our crisis is the dehumanization of the individual person.

Pope Benedict understood this acutely, no doubt because of his first-hand experience with Nazism and the barbarity it unleashed in Western Europe. His work to recover and restore the Christian roots of Christendom is a prophetic call to return to the Gospel of Jesus Christ. Only a return to Christ can reverse this march to cultural suicide but only the embrace of Christ will reveal to man who he was created to be.

The Orthodox hear this, particularly Orthodox conservatives in the Christian West and the Russian Orthodox Church. Conservatives see the decline; the Russian Orthodox Church has experienced its bitter fruit. Pope Benedict has furthered the common project to restore the Christian foundations of culture. Clearly this is divinely ordained. The shared mission increasingly leads to a revaluation of the historical barriers that has contributed to centuries of estrangement between the Eastern and Western Churches and promises more progress in the future.

The Orthodox wonder about Pope Benedict’s replacement. If the new Pope is a cultural conservative in the mold of Popes Benedict and John Paul II, then we know that the rapprochement of the last four decades will continue. If not, it will be more difficult to find common ground. We wonder too if the Catholic Church’s crucial role in preserving the religious heritage of the Christian West will continue with the same deliberation. We hope that it does.

A second important characteristic of Pope Benedict’s service in office is his understanding of the Orthodox patrimony within Christendom. The Regensburg Address is perhaps the most penetrating analysis of the contribution of Hellenism to Christianity offered by a Western Christian in centuries.

Regensburg was met with immediate hostility by the Muslims and thus misinterpreted by the mainstream press. The press seems to have a congenital inability to comprehend any idea outside of an immediate political context. In actual fact, the Address is a historical and theological tour-de-force and gently reminds the Christian West that ignoring the patrimony of the Christian East is like looking at history with one eye closed.

We should be careful not to underestimate the importance of Regensburg. It may have significant impact down the road. Pope Benedict already started the discussion by drawing out ideas about the non-coercive nature of the the Christian faith, considerations that require much more elaboration especially as the hostility towards the Christian faith increases in coming years and as Christendom faces the the historical problem of Muslim expansion once again.

Regensburg is a testament to Pope’s Benedict’s towering intellect but it also reveals a deep humility. There simply is not one hint of triumphalism or false note of partisanship in it. It was clearly intended as a gift to both West and East and those with ears to hear will see that. Pope Benedict’s rare insight and erudition of the Eastern patrimony strengthens both West and East and many Orthodox believers are grateful for it. May God grant us more teachers like him.

What does a retired Pope do? Listening to Catholic radio it appears even the Catholic Church does not know for sure. It is reported that Pope Benedict will retire to a monastery within the Vatican and spend his remaining years in prayer and study. May his remaining years bear much fruit. We still need him.

Fr. Johannes L. Jacobse is an Orthodox priest serving in Naples, FL. He is President of the American Orthodox Institute and blogs at www.aoiusa.org/blog.