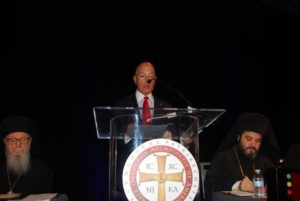 Michel Psaros announces his resignation from his position as Treasurer of the Archdiocesan Council. Shown are Archbishop Demetrios of America and Metropolitan Maximos of Sylibria. (Photo by TNH/Theodore Kalmoukos)

Another Clergy Laity Congress of the Greek Orthodox Archdiocese of America, the 44th in a row, has gone into  history, taking with it all that was said and done, especially at the July 5, plenary session, which I think, using the term “tragicomedy” to describe it, is an understatement.

In many instances, the impression that was given was that it wasn’t a Clergy Laity Congress, meaning a synaxis of church-oriented people  with “the mind of Christ,” but rather an angry mob dressed in religiosity. I saw a clergy full of pain and anger with  the absence of the Bishopric paternity so visible and begging from Archbishop Demetrios himself, who was sitting as a simple observer, speechless, inexpressible, and ignored. Attorney Cathy Walsh, who has been involved in the ecclesiastical affairs of the Archdiocese for many years, was in charge.

Also, the rest of the hierarchs were speechless, and they were simply observing the workings, and the screaming makes you wonder if these are the members that constitute the Holy Eparchial Synod, which supposedly is “the mouth of the Church.” Only one, Metropolitan Alexios of Atlanta, dared to open his mouth on the issue of the previous budgets, reminding all correctly that all were voting for those budgets and thus all are responsible; but unfortunately, he was booed by some delegates, clergy and laity. It was, of course, a manifestation of the ethos of the delegates, which was similar to the ethos of that entire cyclone that the Metropolis of Boston had planted everywhere in the role of overseers and security personnel.

Where to begin to analyze? Despite the insolent propaganda and spinning of the facts that even Pravda of the former Soviet Union would admire, the resignation of Michael Psaros as Archdiocesan Council Treasurer was the most revealing proof about the state of the Congress.

Only after Psaros announced he is leaving did Demetrios arise and say that he would not accept the treasurer’s resignation, but it was in fact too late. Psaros confirmed to The National Herald shortly thereafter that he was in fact leaving. “I am done. In August of 2017, this Archdiocese couldn’t make payroll and had garbage piled up to the second level of the 79th Street headquarters buildings, because we couldn’t afford to pay the garbage man. We transformed the Archdiocese in less than nine months into an enterprise with a balanced budget generating $2 million surplus.”

When Mr. Psaros, an honorable and dignified man, saw that war zone and the small-mindedness of the Clergy Laity Congress, which gave the impression that it was the general assembly of some association of a small Greek village and not the Prime Eparch of the Ecumenical Patriarchate, he got up and departed in an honorable and direct way. He stated to The Herald the following statement, which shows his ethos and spiritual cultivation: “I cannot take my name, my family’s name, and my reputation and attach it to this budget. For clarity, I will serve to the rest of my term, because I was raised the right way, and I am a gentleman, and I have made a commitment.”

Thus, the archbishop was left with the known cycle of pathetic decoys and defenders, trying very desperately to save himself by trying to present a rosy picture and not in any way linking himself to the harm he has caused to our Church and Greek-American community.