[ditty_news_ticker id="27897"] Ancestors of the Orthodox Faith: The Reception of Peter 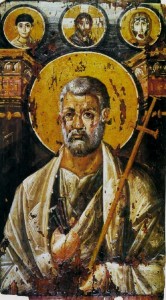 Ancestors of the Orthodox Faith: The Reception of Peter

What happened to St. Peter? The short answer is that we don’t know. The longer answer is more interesting.

It is precisely the lack of authoritative information about Peter that enabled laterChristians to develop competing legends about the final years of his life. In some cases, these differences are quite surprising, especially for modern readers used to associating St. Peter with the Vatican. But not all of the stories about Peter place him in Rome.

Why is there such an important discrepancy? And what do all these stories tell us about the diversity of Christian opinions about Peter?

The last biographical mention of Peter in the New Testament occurs in the Acts of the Apostles (15). This chapter places Peter at a meeting of the disciples in Jerusalem. For biographers, there’s not much else to go on. Two ancient letters—attributed to Peter, included in the New Testament, but most likely written by someone else in Peter’s name—offer no information about him apart from a vague reference that sends greetings from “Babylon.”

The earliest written accounts of Peter’s post-biblical activity, known as “apocrypha,” date to the late second century A.D. Many of these accounts offer elaborate tales in which Peter is the heroic protagonist. Not surprisingly, there has been a great deal of scholarly interest in these texts.

Among the oldest surviving references to Peter in this material is a story that he traveled to Rome in order to combat the false teaching of a sorcerer named Simon. This story builds on material known from earlier writers. In Acts 8, for example, Peter had rebuked Simon for trying to purchase the gifts of the Holy Spirit. Interestingly, Simon will reappear in almost every apocryphal account of Peter’s activities as a kind of arch-nemesis.

The Martyrdom of Peter and the Acts of Peter exemplify Peter’s dramatic encounter with Simon. In both accounts, Peter and Simon trade supernatural blows. In some versions, Simon dies and Peter’s demonstration of power leads to widespread conversion. Some writers place this quasi-duel in Rome. Then, they proceed to narrate Peter’s martyrdom there. In one account, Peter is killed by a group of angry Roman landowners because the saint has convinced their wives to adopt celibacy.

What is equally remarkable, though, is that not all of the ancient writers place Peter in the city of Rome.

An alternate view is provided by a collection of texts known as the Pseudo-Clementines. These texts were written in Palestine by a variety of authors in the fourth century A.D. The collection contains homilies, supposedly preached by Peter; a treatise; and two letters. In all but one of the letters, the disparate writers see Jerusalem—not Rome—as the center of the Christian world. The texts themselves deal exclusively with the churches of Palestine and Syria. For many of the same reasons that the Roman church would eventually emphasize the connections between Peter, Rome, and the Roman church, so too these other documents, the Pseudo-Clementines, emphasize Peter’s role in the foundation narratives of many Syrian and Palestinian communities.

None of these apocryphal texts describe Peter as a bishop. Only a very few, moreover, describe him as having any relationship to the episcopal structure of Rome.

To be sure, there are some ancient sources that do link Peter to the episcopal structure of the Roman church, but it is important to emphasize that there was no single “orthodox” tradition in early Christianity about what happened to Peter when he drops out of the historical narrative of the Book of Acts. Indeed, it was one of the most significant achievements of the Roman church in the fifth and sixth centuries that it was able to convince other Christian communities to adopt its tradition concerning the end of Peter’s life, which situated him squarely in Rome and as the foundation of the papacy.