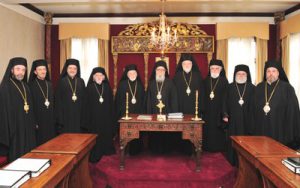 Holy Eparchial Synod of the Greek Orthodox Archdiocese of America

NEW YORK – The Holy Eparchial Synod of the Greek Orthodox Archdiocese of America convened for its regular meeting at the Synodal Chamber of the Archdiocesan headquarters in New York on October 12th and 13th 2016.  His Eminence Archbishop Demetrios, Geron of America presided at the meeting with the participation of all the Members of the Synod.

The Synod deliberated extensively on many matters including the following: