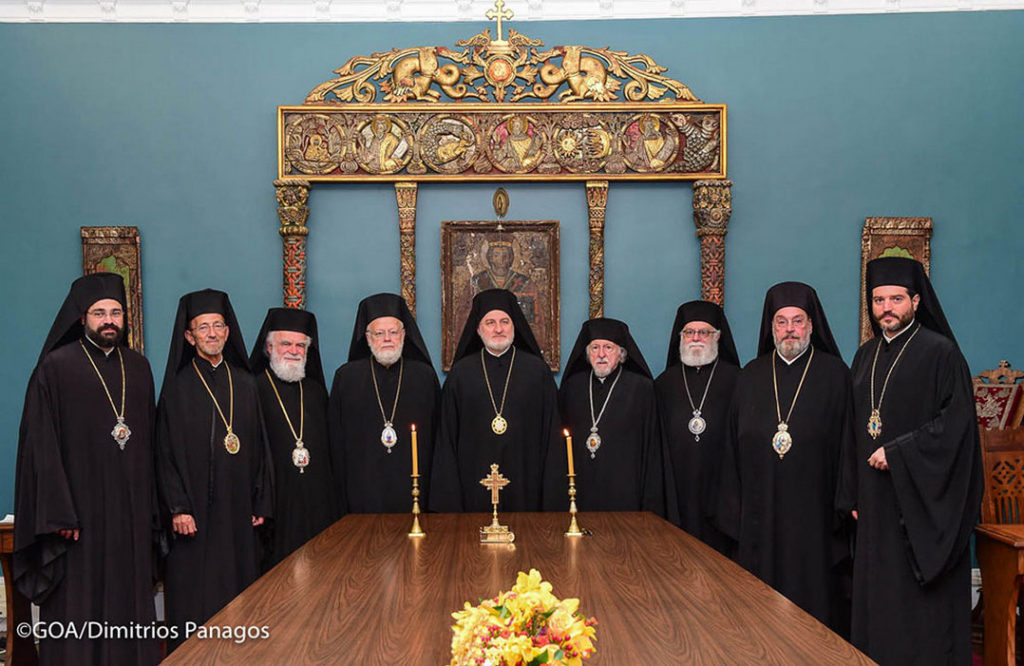 NEW YORK – The Holy Eparchial Synod of the Greek Orthodox Archdiocese of America convened for their regular fall meeting, October 15-16, under the presidency of His Eminence Archbishop Elpidophoros of America and:

1)   Decided on the reorganization of the Synodal Committees as follows:

2)   Deliberated on clergy disciplinary matters in the second degree and decided to extend a formal request to the Ecumenical Patriarchate to laicize three clergymen.

3)   Examined the petitions of three clergymen who have requested to enter into holy matrimony in the second instance and decided to formally extend a request to the Ecumenical Patriarchate.

4)   Instituted a special Synodal Committee presided by His Eminence Archbishop Elpidophoros of America to organize and oversee the celebration of the 200-year anniversary of the Greek Revolution in 1821.

5)   Established a special Synodal Committee presided by His Grace Bishop Apostolos of Medeia to organize and oversee the festivities for the centennial anniversary of the inception of the Sacred Archdiocese of America in 1922.

6)   Following a proposal of the Archbishop for the purpose of electing an Auxiliary Bishop, formulated a three-person (triprosopon) candidacy list of clergy eligible for the elevation to the holy episcopacy based on the approved list of eligible candidates ratified by the Ecumenical Patriarchate.

7)   Was given an update by His Eminence Archbishop Elpidophoros of America regarding the progress of the reconstruction of the Saint Nicholas Greek Orthodox Church and National Shrine at the World Trade Center.

8)   Was informed of the resignations of George Tsandikos and Cathy Bouffides-Walsh and the subsequent appointments of John Catsimatidis and Theodore Bozonelis for the Archdiocesan Council positions of Vice Chairman and Secretary, respectively.

9)   Was informed of the appointment of Rev. Fr. Andreas Vithoulkas as the new Chancellor of the Holy Archdiocese.

10)  Was informed of the appointment of Rev. Fr. Nicolas Kazarian as the new Ecumenical Officer.

11)    Was informed by the Rev. Fr. Earl Cantos on the significance of the new youth protection protocols and procedures.

12)    Was informed by the Rev. Fr. James Paris regarding the condition of the clergy pension plan.

13)    Decided that on the Sunday of Orthodoxy, every Metropolis of the Archdiocese will hold an Archieratical Concelebration with the local hierarchs of all Orthodox jurisdictions.

14)  Decided to encourage the participation of as many choirs as possible for the Christmas-themed concert to be held in conjunction with the representatives of the Oriental Orthodox Churches in Tenafly, New Jersey, on December 8, 2019.

15)  Gladly accepted the recommendation of the Executive Committee of the Assembly of Canonical Orthodox Bishops of the United States of America to convene their next meeting in Washington, D.C., May 2-5, 2020. And, finally,

16)  Decided on the more frequent assembly of the Holy Eparchial Synod and designated the schedule and locations for the upcoming meetings.

From the Office of the Chief-Secretary of the Holy Eparchial Synod.