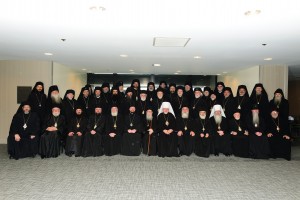 Chicago, IL— The Assembly of Canonical Orthodox Bishops of the United States of America convened for a second day on Wednesday, September 16 in Chicago, IL. Before beginning the day’s meetings, the hierarchs offered a service of supplication to the Mother of God.

In the first session of the day, the hierarchs engaged in a candid and lengthy discussion on the Committee for Canonical Regional Planning’s proposal, discussing in greater depth the opinions that had been offered on Tuesday. After deliberation, the hierarchs unanimously agreed that the Committee for Canonical Regional Planning will proceed in its work with the goal of conducting an in-depth regional study. The study will explore ways of addressing canonical structure and collaboration between jurisdictional ministries and departments within a particular region. The region will be determined by the committee and hierarchs. The results of the study will be submitted to the Assembly at its next meeting.

In the afternoon session, the Committee for Pastoral Practice, represented by Bishop Sevastianos, presented a document detailing the points of consensus on pastoral practices of marriage and divorce. The document was prepared based on the committee’s research of the practices of each jurisdiction. The hierarchs then worked in small groups to discuss points of consensus and divergence. The results of the small group discussions will be shared with the committee to further its work.

In the final session, the bishops reviewed and commented on a draft message for the faithful, which will be finalized before the adjournment of the Assembly.