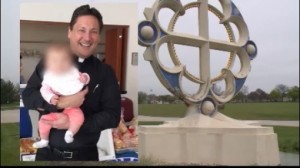 MILWAUKEE —A  pastor at the Milwaukee’s Annunciation Greek Orthodox Church said he’s being forced out after exposing embezzlement allegations against a former priest.

Now, the priest who exposed the case told WISN 12 News reporter Nick Bohr he is facing retaliation from his superiors.

Annunciation Greek Orthodox Church is a landmark, but it’s recently been the focus of unwanted attention.

Dokos was charged last year with embezzling tens of thousands of dollars to pay personal bills, including steak dinners and jewelry.

The allegations against Dokos came to light after he had transferred to another church and the new pastor, the Rev. Angelo Artemas and parish leaders took the case to the district attorney.

Dokos was suspended when criminal charges were filed last year.

The church is within the Greek Orthodox Metropolis of Chicago. WISN 12 News has learned leaders were warned last year in a letter from the Milwaukee District Attorney’s Office about “potential efforts to intimidate witnesses.”

Artemas received emails from his bishop saying that the church is “very open to your release from the Parish and Metropolis if this is not brought to closure.”

Artemas said he was told last week he’s being removed from the Milwaukee parish. He told his congregation last weekend he’s being reassigned against his wishes.

Artemas told WISN 12 News, “I was told in March of 2014 that if the Fr. Dokos investigation led to criminal charges that I would be released. It’s been a long time since I was told that, but I was given no other reason for my reassignment.”

Artemas is being sent to Atlanta.

“While there was a lot of pressure, the pressure resulted in me signing-off on the reassignment to the Atlanta Metropolis. Technically, I’ve agreed to the reassignment,” he said.

Artemas called his reassignment “discouraging” but not damaging to his faith, telling Bohr there’s always been politics in church hierarchy.

WISN 12 News contacted the Greek Orthodox Metropolis of Chicago for comment but hasn’t received a response on Artemas’ reassignment.