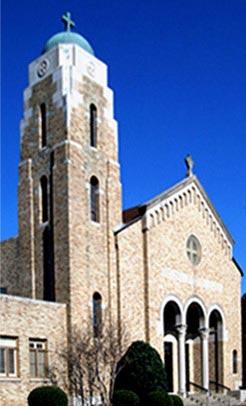 This year the festival will be coming to Memphis for the first time and will be held at the church facility. The event is called the “St. John Chrysostom Oratorical Festival” and is sponsored by the Department of Religious Education of the Greek Orthodox Archdiocese of America.

The parishioners are exciting to be welcoming all of their out of town guests, including His Eminence Archbishop Demetrios, Archbishop of the Greek Orthodox Archdiocese of America, as well as Metropolitan Nicholas- Metropolitan of Detroit.

The Oratorical Festival is a program that invites youth in middle and senior high school to speak about their Faith, their Church and their heritage. A list of topics is given to the participants from which they may choose one on which they will deliver a 3-5 minute speech.

This national event is called the St. John Chrysostom Oratorical Festival in honor of the Church Father, Patriarch and Saint of the Church, John Chrysostom. His sermons, often on behalf of social justice and moral reform, were so eloquent and forceful that he was named “Chrysostom” or “The Golden Mouthed.”

Immediately following the speeches, the judges will render their decisions and each participant will be awarded an Archdiocese certificate signed by the Archbishop. The public is invited to attend this event in which the youth so eloquently express their faith.

Locally, the members of the church are excited to be welcoming the speakers, their family and guests to the Memphis. “It is a honor to have the participates and their families come to town and we are truly blessed to have the Metropolitan Nicholas and of course, Archbishop Demetrios come to our city -to our church community and to celebrate the Divine Liturgy with us on Sunday, June 9th”, said parish priest Fr. James Berends.

“We invite the public to come listen to what these wonderful young people have to share about their Orthodox faith, and perhaps afterwards have an interest to even want to learn more about it themselves”, adds Berends. “It is a wonderful way for us to spread the word about Orthodoxy”.

The festival will take place at the church on Highland on Saturday, June 8th at 9:30 am and The Hierarchical Divine Liturgy will be held Sunday, June 9th at 9:30 am.