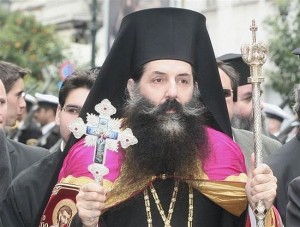 Metropolitan Seraphim of Piraeus has sent a letter to the Holy Synod of the Greek Orthodox Church concerning the upcoming Pan-Orthodox Council. The main propositions of the document were published on the site Agionoros.ru.

Vladyka styled the decision that every Local Church shall be represented by twenty-four hierarchs at the council “a never-before-seen innovation,” without precedent in two thousand years of Church history.

He noted that at every Ecumenical Council “as many bishops as possible” took part. In practice, Churches did sometimes send representatives, but only in the event that the bishop could not arrive to the Council for one reason or another.

“In accordance with Orthodox ecclesiology, every bishop, governing even the smallest diocese, represents his flock and is a living member of the Universal Church,” wrote the metropolitan in his letter. To not invite every bishop to the Pan-Orthodox Council, in his opinion, denies the opportunity for the fullness of the Church to express its opinion, “which, it seems, the organizers of the Council want.”

Vladyka recalls that in the sessions of the Ecumenical Councils heretofore taking part were representatives of the lower clergy, monastics, and laity. “It wouldn’t be an overstatement to call the impending council a Pan-Orthodox Council without the Orthodox. It is obvious that by the decision on representation at the council, running contrary to Tradition, the likelihood of some bishops speaking out against the decisions of the Council, should they represent a revision of Tradition, was avoided.”

“Completely unfounded,” Metropolitan Seraphim calls “the assertion of Ecumenical Patriarch Bartholomew, by which the Orthodox Church can designate the upcoming council only ‘Pan-Orthodox,’ and not ‘Ecumenical,’ because the Roman Catholic ‘Church’ will not be taking part. The falling away of heretics from the Church in no way minimizes her universal character.”

Metropolitan Seraphim expresses his disagreement with the principle of “one Local Church—one vote.” In his opinion, every bishop taking part in the work of the Council should have the right to vote.

The metropolitan of Piraeus exposes the draft document of the Pan-Orthodox Council, “Relations of the Orthodox Church with the rest of the Christian world,” adopted at the Fifth Pan-Orthodox Pre-Conciliar Meeting in Chambesy, October 10-17, 2015, to detailed analysis and critique.

“In this text nothing is said of heresies and delusions, as if they stopped appearing in the history of the Church after the eighth century.” As the Ecumenical Councils of that time were occupied with analysis of and conciliar condemnation of various fallacies, the Pan-Orthodox Council is not taking up a similar principle, writes the bishop in his message.

The Orthodox Church considers that any effort to divide the unity of the Church, undertaken by individuals and groups under the pretense of preservation or protection of the truth of Orthodoxy, is subject to condemnation. As evidenced by the entire life of the Orthodox Church, preserving the true Orthodox faith is possible thanks only to the conciliar structure, which from ancient times has represented for the Church the competent and supreme criterion in questions of faith.

In the bishop’s opinion, the given provision creates the impression that the forthcoming Pan-Orthodox Council seeks “to predetermine the infallibility of its resolutions.” The statement that “preserving the true Orthodox faith is possible thanks only to the conciliar structure, which from ancient times has represented for the Church the competent and supreme criterion in questions of faith,” is not mindful of the historical fact that in the Orthodox Church the final criterion of faith is the dogmatic self-consciousness of the members of the Church. That is precisely why some councils, undertaken to be ecumenical, were recognized to be robber councils and illegitimate.

Metropolitan Seraphim expresses his disagreement with the decision of the primates to invite to the Pan-Orthodox Council Catholic, Monophysite, and Protestant observers: “In the 2,000-year history of the Church there have never been non-Orthodox ‘observers’ at Local and Ecumenical Councils.” This practice occurred only at the First and Second Vatican Councils of the Catholic church, said Metroplitan Seraphim, specifiying. “Is it permissible for a Pan-Orthodox Council to take papal practices as its model?” asks Vladyka.

Metropolitan Seraphim recalls that in the past heretics were invited to Ecumenical Councils not as “observers,” but as defendants, to bring them to repentance. If they continued to persist in their delusions, they were excommunicated from the Church and driven out of the Council’s sessions. In his opinion, the attendance of non-Orthodox at the Pan-Orthodox Council “legitimizes delusions and heresy, and practically undermines the authority of the Council.”