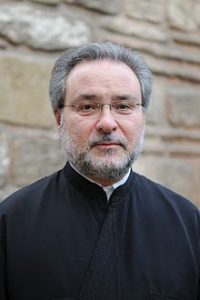 One of the anticipated goals of this Council is that the process of dialogue and communication started here will continue in years to come and even lead to more Councils or smaller meetings in the future. The root of the Greek word for council (syn-odos) means precisely “being on the same road together.” Exactly how that will be accomplished very much depends upon the final statements of the Council, on the definitive message of the council, as well as the reception of the council’s decisions and conclusions by the people of God.

Our churches have not assembled “in one place, together” for centuries. Yet, we call ourselves the church of the councils. Councils are what bishops are supposed to be doing and attending; they are where the problems and challenges of our church are resolved. If we do not meet in council, then our church is distorted, disfigured, diminished into an authoritarian institution. But that is not the way of the Church; it is not the way of the Gospel; and it is certainly not the way of Christ.

For this Council, lay input was achieved in several ways. Beyond the primate (or first hierarch) of each autocephalous Orthodox Church, each delegation includes 24 hierarchs and an additional 6 advisors.  Among these advisors, lay people have been included on some of the delegations to the Council. I know that our (ecumenical) patriarchate included two laywomen and a layman. In addition, several lay people (theologians and scholars) participated on the special Pan-Orthodox Drafting Committee for the final statement to be approved by the Synaxis and, subsequently, the Council. Of course this is not sufficient progress, and we look for ways to include laity even more. Perhaps within the paramount reception process of the Holy and Great Council’s decisions and documents, continued discussion will be vital for the Church as a whole and should certainly including both clergy and laity together.

The rules for this Council do not permit the introduction of new topics at this point. Nevertheless, the question of the Diaspora (whether we use the word or not is, to me, secondary, especially when our churches seem so far behind reality on this issue) will be reviewed and discussed in relation to the regional Assemblies of Bishops that were established over the past decade. However we cannot expect the conversation to develop into the creation of new jurisdictions, especially since the topic of autocephaly was removed from the agenda. These topics will no doubt become more essential as things progress beyond the Council. In many ways, it is up to the local Assemblies of Bishops to propose models of church administration based on the canonical tradition. That is what the Mother Churches have asked them. So if there is little progress – inactivity or indifference – I would place the responsibility squarely in the hands of the churches that constitute the local Assemblies.

As observed previously, lay theologians have already been involved in writing both the documents for the Council itself as well as the final statement to be released for the Council. There are scholars also participating in the Council not only as delegates but also as part of the press team of the Ecumenical Patriarchate, whose phenomenal work you can consult on orthodoxcouncil.org. After the Council, I have no doubt that their insights will be important for the process of theological discussion and wider reception.

OCL can assist by continuing to serve as a call for prayer and a conduit of information about the Council to the general Orthodox population in the US. This event is undoubtedly the greatest (even if criticized), largest (even if some churches changed their minds about attending), most comprehensive (even if controversial) gathering of churches and bishops in council for over 1,000 years. Yet, there is a lack of awareness among the Orthodox faithful about what the Council actually is doing, what its function should be in the Orthodox Church, and what issues the Council is discussing. OCL can certainly continue to “get the word out” that the Council is taking place and that the Orthodox bishops of the world really are concerned about issues related of Pan-Orthodox unity and pastoral concern. And after the Council, OCL could continue to promote discussion about the Council’s and impact and importance.