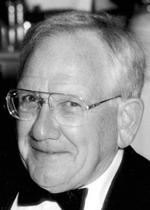 Anthony G. Andrikopoulos, 82, went to be with the Lord on April 11.

He was born April 21, 1932, in Greeley, Colo., to Margaret E. (Roman) Andrikopoulos and George B. Andrikopoulos.

Anthony graduated from Cheyenne High School in 1950, the University of Wyoming in 1956 and was honorably discharged from the U.S. Naval Reserve in 1958.

He established his own oil and gas business in 1960, A.G. Andrikopoulos Resources Inc. He was inducted into the Rocky Mountain Oil and Gas Hall of Fame in 2009.

He served on the boards of several local charitable organizations and was active in the Greek Orthodox Church, both locally and nationally. He is one of the founders of the Holy Apostles Orthodox Christian Church in Cheyenne.

Anthony and his wife, Barbara, have supported many local charities. He enjoyed spending time with his family, traveling, skiing and fishing.

Anthony was predeceased by his brother, Basil Andrikopoulos; and his parents.

Donations may be made to the Boys and Girls Club, Cheyenne Botanic Gardens or Holy Apostles Orthodox Christian Church.

Christ Is Risen!  Our brother in Christ, Anthony Andrikopoulos, has gone to his eternal rest.

Andy’s many accomplishments will be remembered and celebrated during these days to come.  But for me, his devotion and commitment  to the possibilities for Orthodoxy in America  is tops.  He had a missionary zeal to see the Church grow.  He decried the static Church that we are becoming.   One of the greatest achievements in the winding-down years of his life was to encourage the young families in the Cheyenne Community to embrace the missionary  admonition of our Lord and recover what Fr Chad Hatfield calls the centrality of the Great Commission.  The Holy Saturday Morning Gospel of Matthew (28:19-20), read on the morning that our brother in Christ Andy died, records Christ telling his disciples to “Go, therefore, and make disciples of all nations, baptizing them in the name of the Father, and of the Son, and of the Holy Spirit, teaching them to observe all that I have commanded you; and behold, I am with you all days, even unto the consummation of the world.”   What a legacy and example of evangelization he leaves us. We remember him as a founding member of Orthodox Christian Laity and a board member and advisor for 28 years.  He shared our vision that  a unified, self-governing, autocephalous Orthodox Christian Church in the United States is the best way to do the work of our Lord.  He was a benefactor and more importantly a guide for us.  We are grateful for Andy’s guidance.  We know that his last days were not easy, but they were healing days; because he had great care from his soulmate Barbara and other family members.  Christ is risen from the dead, trampling down death by His death, and restoring life to those in the tombs. May his memory be eternal.