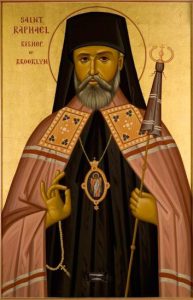 Yes, Brooklyn does have its own saint.

Antiochian Orthodox Christians celebrate the feast and life of St. Raphael of Brooklyn each November for his work in establishing the Syrian mission here. He was the first Orthodox bishop consecrated in North America.

This branch of Orthodox Christendom had its roots in ancient Antioch, an ethnically diverse metropolis in Syria during the first century, Common Era, where the followers of Christ were first called Christians. Modern-day Antioch is in Turkey, but just about 12 miles from the Syrian border.

Fast-forward from the ancient Near East to 19th century Brooklyn. Raphael was born Rafia Hawaweeny in Damascus (though some biographical literature from the Antiochian Orthodox Christian Diocese of North America lists his birthplace as Beirut, Lebanon). Raphael was educated at Halki Island. He received his theological training in Kiev, Russia (under the auspices of the Russian Orthodox Church, which maintains bonds with the Antiochian Orthodox Church). He was ordained to the priesthood in Moscow.

The Syrian Orthodox Benevolent Committee in New York City brought Fr. Raphael to Brooklyn. Immigrating in 1895 and serving under the auspices of the Russian Orthodox Mission, which was then the only established Orthodox hierarchy, he was technically pastor of St. Nicholas Church (later cathedral) in Brooklyn. However, he was also the circuit-rider pastor of several dozen tiny, isolated communities spread across the continent. As a priest, he crossed the U.S. repeatedly, both before and after his 1905 consecration as bishop of Brooklyn — the first such Orthodox consecration in North America.

Raphael led the growing Syrian Mission here at the start of the 20th century. St. Nicholas Church of Brooklyn was designated as his cathedral.

Bishop Raphael served with great dignity, adding 30 parishes to the mission during those years. He established a publication called Al Kalimat (The Word), through which he informed his readership of the truths of Orthodoxy. He died in 1915.

Eighty-five years later, on May 29, 2000, he was canonized as a saint of the Holy Orthodox Church by the Orthodox Church in America. The actual canonization liturgy took place at the Cathedral Shrine to St. Raphael at St. Tikhon’s Monastery in South Canaan, Pennsylvania. This was the monastery that Bishop Raphael had helped consecrate many years ago during his ministry. Celebrations were also held that year for him in Brooklyn, including one at St. Nicholas Cathedral that fall.

Metropolitan Joseph, archbishop of New York and Metropolitan of all North America, will preside at Divine Liturgy. An “all-night” vigil begins at 6 p.m. with Great Vespers. Festal orthros (a prayer service) and Divine Liturgy follow. Those who cannot stay for the entire vigil are welcome to come for part of it.