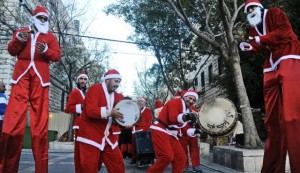 A band of Santas performing on the streets of Nazareth. Photo by Gil Eliahu

Nazareth is dreaming of a bright Christmas, with hotels and restaurants booked up ahead of the big day on December 25. Locals are thankful that most Israelis have short memories.

NAZARETH – Behind the Greek Orthodox Church of the Annunciation, workers are putting the finishing touches on the man-made Christmas tree that will be lit up on Wednesday evening, at an official ceremony to mark the start of the holiday season.

Standing 26-meters tall, this metal-based structure is so massive it will have to be dragged down to the main plaza below in three separate pieces (the bottom-most section features a little cave with a Nativity scene display). “We got the blueprints from a factory in China,” reveals Anwar Abdu, director of the Orthodox Community Council in Nazareth, as he supervises last-minute preparations.

The annual tree-lighting ceremony may be an age-old tradition in other cities around the world, but not here in Jesus’ hometown. In fact, it was only four years ago that Abdu managed to convince officials in Israel’s largest Arab city to hold such an event. “I was introduced to it for the first time while studying law in Kiev,” he recounts. “And I asked myself, How can it be that, of all the places in the world, here in Nazareth we don’t have a big Christmas tree lit up in the center of town?”

Despite the flare-up in Jewish-Arab tensions in recent months, the mood in Nazareth these days is overwhelmingly upbeat, with city officials and local businessmen bracing themselves for an onslaught of seasonal tourists as Christmas approaches.

“We’ve just been told by the police to prepare ourselves for 100,000 visitors,” says Ali Salam, the city’s newly elected mayor and the first Muslim to hold the position in 20 years. “That compares with 30,000-40,000 in previous years.” He estimates that about 60 percent of the visitors will be Israelis – both Jewish and Christian – with the rest foreigners.

Mejana, a popular restaurant close to the Greek Orthodox church, has been completely booked for Christmas lunch for almost a month already, and has now stopped taking reservations for New Year’s Eve. Among those who will be dining here on Christmas Day is a couple celebrating their engagement. “Only she doesn’t know yet that her boyfriend plans to pop the question at the restaurant,” reveals Souhel Farran, who owns and runs the restaurant, which specializes in Middle Eastern fare.

The weather may still be warm outside, but inside Mejana it’s hard to escape the wintery feel of Christmas. Large green and red wreaths decorate the windows, and descending from the ceiling are strings attached to cotton balls, meant to resemble snowflakes.

One of the main draws for visitors to Nazareth at this time of year is the Christmas market, which also opens on Wednesday. Like the Christmas tree in the city square, it’s quite a new tradition, having begun just four years ago. Over the course of four days, about 50 open-air stalls, set up along the narrow road connecting the Greek Orthodox church to the Old City, will be selling street food, Christmas decorations, handmade crafts and other tchotchkes. However, conspicuously absent from the fare on offer in this predominantly Muslim town will be the hot-mulled wine and other belly-warming alcoholic beverages that are staples elsewhere.

“Many people were betting that when I became mayor, I’d do away with the Christmas market,” says Salam. “But I had no such intention. For me, the most important thing is to ensure that people have a source of livelihood – because when there’s livelihood, there’s quiet.”

It’s still a bit early for Santa Claus to make his grand appearance in the flesh in the main town square, but his round, bearded face peers prominently from billboards around town advertising all sorts of local products, along with international classics like Coca-Cola. And in the city’s commercial center, the Santa hats hanging from racks on the sidewalks are hard to miss. These red hats with pom-poms are especially popular among Jewish Israelis, who typically flock to Nazareth at this time of year to experience some religious diversity. If past years are any indication, a good place to sight them this coming week will be near the giant Christmas tree, where they are sure to be posing for selfies, wearing their newly purchased Santa hats.

Christians make up less than one-third of Nazareth’s 80,000-strong population. Among the various Christian groups here, the Greek Orthodox – who celebrate Christmas on January 7 – are predominant. Still, the Christmas parade, which is the main holiday event of the year and draws tens of thousands, takes place on December 24, the day before the holiday is celebrated by Western Christian churches.

Back in October 2000, following violent protests around the country that resulted in the deaths of 13 Arab demonstrators, many Jewish Israelis began avoiding Arab towns like Nazareth. It took more than a year before life returned to normal. When last summer’s war in Gaza prompted another wave of clashes in Arab towns, many local businesses feared that history would repeat itself.

That didn’t really happen. “October, for example, was a fabulous month,” reports Maoz Inon, a young Jewish social entrepreneur who runs a guesthouse here. He is among the founders of a new local business forum that aims to draw more visitors to town (its most recent initiative was the online sale of vouchers for tasting tours around Nazareth). November, however, was pretty dismal, he says, after police shot dead an Arab youth in the nearby town of Kafr Kana, once again raising tensions.

Almost all the hotels and guesthouses in town are booked for the Christmas season, reports Inon. “And if they’re not yet, they will be. But it’s unclear what will be after Christmas,” he adds.

Tareq Shehadeh, director of the Nazareth Culture and Tourism Association, estimates that hotels will be operating at full capacity at least until mid-January. “Some of the other smaller Christian groups, like the Armenians, will be celebrating Christmas later in the month,” he explains.

Investors in the local tourism industry, he notes, seem to be confident about the longer-term future as well. “We have two new hotels, with a total of more than 400 rooms, that are scheduled to open just before Christmas next year, and another two with plans underway,” he says.

A key factor working in favor of local businesses, says restaurateur Farran, is that most Israelis have short memories. “Anytime there are tensions, we feel it for a few weeks, and then things get back to normal,” he observes.

Mayor Salam concurs. “I’d be lying if I said that the war this summer didn’t affect us – and I mean the entire country, not just Nazareth,” he says. “But I’ve learned not to look back, and that life goes on.”