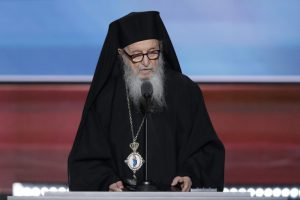 BOSTON – The Holy Eparchial Synod of the Greek Orthodox Archdiocese of America defied the Synodical decision of the Ecumenical Patriarchate to revise the List of Candidates for the elevation to Episcopacy.

Instead in a unprecedented move they decided that the Archbishop with a representation of hierarchs travel to Constantinople to try to convince Ecumenical Patriarch Bartholomew to reverse the initial Synodical decision that canceled the election of Bishop Sevastianos of Zela as Metropolitan of Chicago.

The decision was taken on Thursday July 20 in a special session of the Eparchial Synod convened by its president His Eminence Archbishop Demetrios of America. All the Synodical hierarchs were present except Metropolitan Isaiah of Denver.

Archbishop Demetrios will send a letter to Ecumenical Patriarch Bartholomew requesting an audience at the Phanar.

The above decision could ignite ecclesiastical developments of historic magnitude.