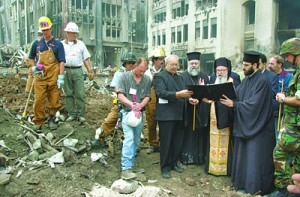 Archbishop Demetrios of the Greek Orthodox Archdiocese of America, right (with gold vestments) leads a memorial service in 2001 at the site of the former St. Nicholas Greek Orthodox Church, which was destroyed by falling rubble from the World Trade Center during the 9/11 terrorist attacks. Attempts to rebuild the church have run into bureaucratic delays. RNS photo courtesy Dimitrios Panagos/Greek Orthodox Archidocese of America .

One of the people who lived very close to the World Trade Center on September 11, 2001 was the leader of our Greek Orthodox Church in America, Archbishop Demetrios. In the ensuing days, weeks, months… and beyond, the archbishop became a source of comfort to those who lost their loved ones in that horrific tragedy. Demetrios remembers the details quite vividly, and he shares those memories with The National Herald.

“We were in Boston the day before, September 10, for the Constantine G. Karamanlis Chair in Hellenic and European Studies at The Fletcher School of Law and Diplomacy at Tufts University,” the archbishop began. “Archdeacon Panteleimon and Michael Jaharis were there as well. We spent the night in Boston, and in the morning we went down to the hotel lobby to check out. That’s when we saw on the television screen that one of the Twin Towers was on fire. ‘Was this an accident?’ we thought. But before we had a chance to ponder, a second plane hit the other Tower. Clearly, this was a terrorist attack. And the airport was shut down. “Mr. Jaharis suggested that we drive to New York but the roads were closed. He offered his home in Connecticut as a place to sleep for the night, and the next day, with assistance and advice from the police, we were able to make our way back to New York and headed straight to Ground Zero, along with Fr. Alexander Karloutsos. We were able to have a frontline view of the rubble that was once the Twin towers. I remember it being a sunny day, but there was a blur in the air, a peculiar burning smell, and even a burning taste in our mouth of the mixture of dust, cement, and perhaps remnants of the three thousand bodies – all having been pulverized.”

Demetrios continued: “We began a Trisagion, at which point a group of soldiers arrived. One approached me and asked if we would join them for one, big prayer, and we did. We hoped that we would be able to save some of the men and women who had been inside the Twin Towers – what we did not know at the time is that they were all dead.” The archbishop was then approached by Police Lieutenant John Kassimatis, injured and bloodied from his attempts to rescue any survivors. He said to Demetrios: “I’ve been searching all night for my brother-in-law, who surely must be dead.” The archbishop, in turn, asked: “How are you so certain he is dead?” To which Kassimatis replied: “Because he never would have left the building until he made sure every single person in there had evacuated, and since we know that not everyone had evacuated, then surely he must have remained inside as well.”

Meanwhile, Demetrios continued, “we knew that our own St. Nicholas Church was completely destroyed as well. He was asked by a journalist whether the horror and devastation made him lose his faith in God, to which Demetrios replied: “as a child I experienced the German occupation and bombing, seeing corpses in the street, and so I am familiar with this terrible image of mass death. As I watch this explosion of hatred, I see the rescue efforts and the support, and so I also see an explosion of life, and this is our hope.”

Demetrios shared his own personal experience with post- 9/11 America, particularly in terms of a heightened emphasis on security. “Thanks to Mr. Kassimatis, when I travel, I usually don’t have to go through all of the security clearances that everyone else does. And I have yet to be asked to remove my Raso (religious garb). But I do have to take off my engolpion – medallion, because it contains metal. “We also see heightened security at bridges, subway stations, etc., and we pray to God not to allow another attack to happen, though such a possibility is not out of the question.”

President Bush visited Ground Zero on September 14, on which the Greek Orthodox Celebrate Tou Stavrou – the Feast of the Cross. Demetrios returned, and leaders of various other religions were there, awaiting the president. It was a rainy day, and so the mounds and mounds of ashes had turned everything into black mud. “There were lines of police officers and firefighters, tough, brave, men, but they were so moved by the experience they were in tears,” Demetrios said. “The crowd had squeezed everyone so tightly, that President Bush had room only to stand on one leg. I said: ‘can you please make some room so that the president can walk on two legs?’ “I also asked that bulldozers please not be used to excavate the site where the St. Nicholas Church building crumbled, as there were presumably sacred items amid the rubble. ‘Do not worry,’ I was told. ‘The excavation will be treated with the care given to archaeological sites.’ Sure enough, the work was done with brush and hammer, manually, not with bulldozers. But nothing was recovered.”

Archbishop Demetrios described the years of difficulties involved in the reconstruction of the St. Nicholas Church, which TNH has reported in detail at every turn. But on this day, he also looked forward, emphasizing that reconstruction of the Church was moving forward as planned. “They will proceed quickly,” he said. “It should be completed in about 18 months.”