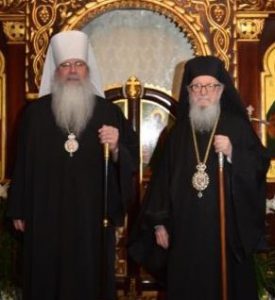 Metropolitan Tikhon hosts Archbishop Demetrios at OCA Chancery on May 10, 2016.

SOUTH CANAAN, PA [STOTS Communications]  With great joy, the Board of Trustees of Saint Tikhon’s Orthodox Theological Seminaryhere announced during the second week of May that the speaker for the school’s 74th annual Commencement will be His Eminence, Archbishop Demetrios of the Greek Orthodox Church of America.

Commencement exercises will be held at the outdoor chapel on the grounds of Saint Tikhon’s Monastery on Saturday, May 28, 2016 at 1:00 p.m.  See related story.

During the festivities, Archbishop Demetrios will be awarded a Doctor of Divinity, Honoris Causa, in recognition of his yeoman service to Orthodox Christian theological education, the Greek Orthodox Archdiocese, the Assembly of Canonical Orthodox Bishops in the USA, the Ecumenical Patriarchate of Constantinople, and world Orthodoxy in general.

A native of Thessaloniki, Greece, Archbishop Demetrios graduated with distinction from the University of Athens School of Theology in 1950.  He was ordained to the diaconate in 1960 and to the priesthood in 1964.  He was elected Bishop of Vresthena in 1967, serving as Auxiliary to the Archbishop of Athens.  From 1965 to 1971, he studied New Testament and Christian Origins at Harvard University, from which he received a Ph.D. “with distinction” in 1972.  He earned a second doctorate in Theology from the University of Athens “with distinction” in 1977.  From 1983 to 1993, he was the Distinguished Professor of Biblical Studies and Christian Origins at Holy Cross Greek Orthodox School of Theology, Brookline, MA.  He also taught at Harvard Divinity School as Visiting Professor of New Testament.  In 2003, he was inducted into the Academy of Athens as a member who resides abroad.

In August 1991 he was elevated to the dignity of Titular Metropolitan of Vresthena.  He was elected Archbishop of America on August 19, 1999 by the Holy and Sacred Synod of the Ecumenical Patriarchate and enthroned on September 18, 1999 at the Archdiocesan Cathedral of the Holy Trinity in New York, NY.

An Orthodox hierarch for nearly half a century and a theologian, statesman, and biblical scholar of international recognition, Archbishop Demetrios has faithfully demonstrated the healing power of Christ’s truth and compassion.  His message has been one of unity, genuine relationships, and an ever-increasing commitment to God and to service in the name of Christ.  He has manifested the effectiveness of God’s grace in establishing peace, tranquility, stability and trust both within the Church and throughout the world.  On November 26, 2015, by unanimous decision, the Holy and Sacred Synod of the Ecumenical Patriarchate bestowed upon Archbishop Demetrios the high title ofGeron (“Elder”) in recognition of his “invaluable services to the Mother Church, the entire Orthodoxy and the Theological Literature.”