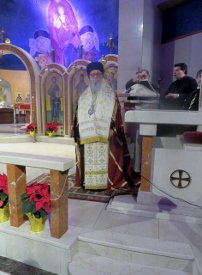 Archbishop Demetrios, Primate of the Greek Orthodox Church of America

“The Power of the Saints and Martyrs have saved Christianity,” said His Eminence, Archbishop Demetrios, Primate of the Greek Orthodox Church of America, in his historic speech before more than five hundred people on Friday evening, December 5, 2014, at the Feast Day Vespers of St. Nicholas Greek Orthodox Church of Flushing, New York. “During the WWII Occupation of Greece, people believed in the Virgin Mary and the saints. Cyprus is living a drama, with part of the island called the Katehomena (Occupied) and thousands of refugees in their own country. This is chaos. People are living a difficult struggle each day. Cypriot leaders are asking for help from God. Ferocious Islamists are wiping out the ancient centers of Christianity in the Middle East from Afghanistan, Iraq, Syria, Lebanon, Egypt and countries of North Africa. This is a terrible catastrophe with new martyrs each day. The Garner case is causing a terrible crisis in New York City and the cities of America. We need help from Jesus Christ, St. Nicholas, the Saints.”

A reception followed in Sarantakos Hall, hosted by the PTA’s of William Spyropoulos Day School and the “Stephen and Areti Cherpelis” Greek School. Prominent personalities who attended included: Ms Andri Anastasiades, First Lady of the Republic of Cyprus and spouse of the President of the Republic of Cyprus, Mr. Nicos Anastasiades, Consul General of Cyprus Mr. Vasilis Philippou and Mrs. Philippou, the Archons of the Ecumenical Patriarchate of Constantinople and others. The real honored guests are the parishioners of St. Nicholas Greek Orthodox Church of Flushing. All classes united to create a magnificent religious and education center. Their dedicated effort contributed in the greatness of Hellenism in New York City and the United States of America.

“Saints such as St. Seraphim were roasted on a spit like lambs during the Tourkocratia (Ottoman Empire),” continued the Archbishop. “St. Nicholas lived during the time of St. Constantine (Constantine the Great). He dedicated himself day and night to his ministry. These are the saints who lived in different time periods and created Christianity. St. Nicholas lived during the 4th century who we remember 1700 years later. This remembrance makes him a live presence in our lives. St. Nicholas continues to be with us. Maritime workers pray to him. In war and illness, everyone believes in St. Nicholas.”

According to http://en.wikipedia.org/wiki/Saint_Nicholas, “Nikolaos of Myra, was the Greek Bishop of Myra (Demre in modern Turkey). Because of the many Miracles, he is known as Nikolaos the Wonderworker. He had a reputation for secret gift-giving, such as putting coins in the shoes of those who left them out for him…thus became the model for Santa Claus. Saint Nicholas is the patron saint of sailors, merchants…”

His Eminence explained that ”nothing remains of St. Nicholas Church in Manhattan after 9/11. The strength of God and St. Nicholas are bringing about a rebirth. God and saints are winning. We will build an American center of religious worship. St. Nicholas, who lived 1700 years ago, is present today as a fighter for us. Our faith in saints assists people in persevering in a positive way. I would like to thank Father Rev. Protopresbyter Paul Palesty, Father Rev. Presbyter Joakim Valasiades, Father Aristidis Garinis and the clergy of various churches, the choir and chanters that came tonight to participate in the liturgy. Tonight we also have the young scouts who are participating in the church service. You must stay in our church. When you become adults, you must keep our faith strong.”

The First Lady of Cyprus thanked His Eminence “for assisting in the creation of a College Scholarship Fund in Cyprus to aid students who lack economic means acquire a higher education. You are lucky to have such a unique religious leader.” On September 18, 1999, Archbishop Demetrios was enthroned as Primate of the Greek Orthodox Archdiocese of America, in a time of turmoil. He has brought unity and overseen an expansion and prosperity of the Greek Orthodox Church across the country.

Rev. Protopresbyter Palesty said: “We are honored to have His Eminence. His sympathy for Cyprus and the Patriarchate has touched everyone’s heart. The First Lady of Cyprus, Mrs. Anastasiades, is familiar with our parish. We welcome her with warmth.” The topic of conversation was Pope Francis of the Catholic Church asking Patriarch Bartholomew of Constantinople to bless him on November 30, 2014, in Istanbul, Turkey.

According to Huffington Post, “Pope Francis and the spiritual leader of the world’s Orthodox Christians demanded an end to the persecution of religious minorities in Syria and Iraq on Sunday and called for dialogue with Muslims, capping Francis’ three-day visit to Turkey with a strong show of Christian unity. Francis and Ecumenical Patriarch Bartholomew I issued a joint declaration, urging leaders in the region to intensify help to victims of the Islamic State group, and especially to allow Christians who have had a presence in the region for 2,000 years to remain on their native lands. ‘The terrible situation of Christians and all those who are suffering in the Middle East, calls not only for our constant prayer but also for an appropriate response on the part of the international community.’” This subject was explained in His Eminence Archbishop Demetrios’ Vespers’ sermon on December 5.

Journalists Nicole Winfield and Susan Frasier wrote “Francis, who represents the 1.2 billion-strong Catholic Church, and Bartholomew, the spiritual leader of the world’s 300 million Orthodox Christians, called for ‘constructive dialogue’ with Islam ‘based on mutual respect and friendship.’ Inspired by common values and strengthened by genuine fraternal sentiments, Muslims and Christians are called to work together for the sake of justice, peace and respect for the dignity and rights of every person, especially in those regions where they once lived for centuries in peaceful coexistence and now tragically suffer together the horrors of war… Bartholomew noted that Christians are being persecuted across the Mideast regardless of their particular confession. ‘The modern persecutors of Christians do not ask which church their victims belong to,’ he said. ‘The unity that concerns us is regrettably already occurring in certain regions of the world through the blood of martyrs.’”

Share. Twitter Facebook Pinterest LinkedIn Tumblr Email
Previous ArticleAddress by His All-Holiness Ecumenical Patriarch Bartholomew to His Holiness Pope Francis during the Divine Liturgy for the Feast of St. Andrew in the Venerable Patriarchal Church (November 30, 2014)
Next Article Kowtowing to Moscow=Bad Ecumenism