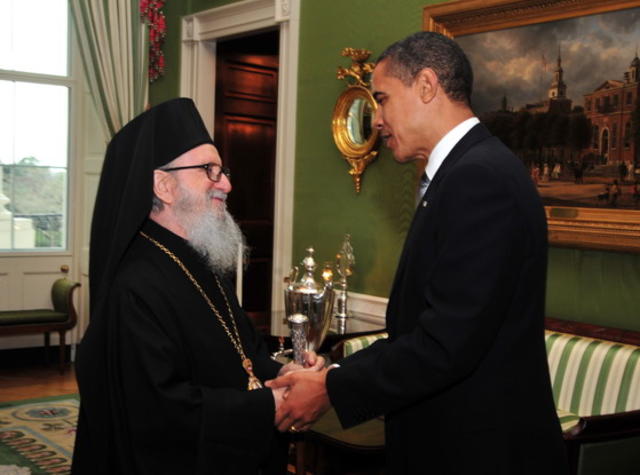 NEW YORK – His Eminence Archbishop Demetrios of America has been invited to offer the benediction at the 2013 Presidential Inaugural Luncheon following the Inaugural ceremonies at the U.S. Capitol on January 21, 2013. The invitation was extended by U.S. Senator Charles E. Schumer, Chairman of the Joint Congressional Committee on Inaugural Ceremonies (JCCIC), which also hosts the luncheon to honor President Barack Obama and Vice President Joe Biden.

“It’s my honor to select Archbishop Demetrios to offer this important task at the Inaugural Luncheon,” Schumer said. “The Archbishop is a tremendous and respected leader to millions in the Greek Orthodox community in every corner of the United States . I am blessed to call the Archbishop a friend, and I look forward to his benediction to conclude the 2013 Inaugural events at the Capitol.”

Upon hearing of the invitation by Senator Schumer, the Archbishop said:

“I feel exceedingly honored by such a gracious invitation to offer the benediction at the Presidential Inaugural Luncheon. To participate with a special prayer in such a historic event constitutes a tremendous honor indeed. I express my deep gratitude to my distinguished friend, Sen. Charles E. Schumer, whom I hold in high esteem, love and respect for what he is and for what he has been doing consistently, tirelessly and effectively for the good of the people not only of the State of New York but of the entire Nation, as well.”

January 21, 2013 is Martin Luther King, Jr. Day. It will be the second time that this federal holiday has coincided with a Presidential Inauguration. The first was President Bill Clinton’s second Inauguration in 1997.