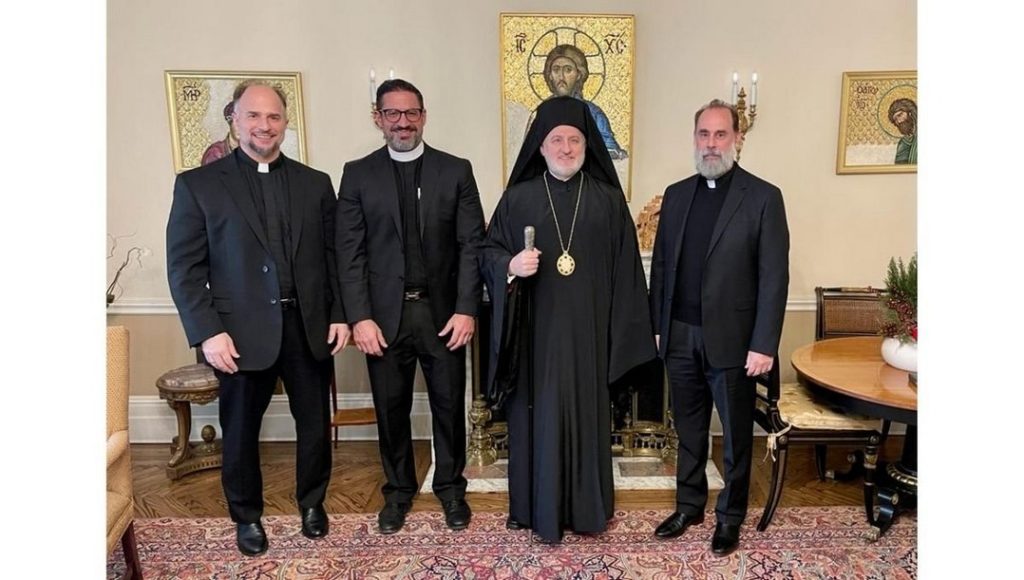 V. Rev. Archimandrite Nektarios Papazafiropoulos was born in Jersey City, New Jersey and grew up in Astoria, New York, raised by devout Christian immigrant parents who emphasized his Orthodox faith and Greek heritage. Upon completing Long Island City High School, he enrolled at Polytechnic University to study Electrical Engineering, completed his Bachelor’s Degree in Electrical Engineering in 1985, and subsequently his Master’s Degree in the same field. He spent the next ten years in the industry.

Having received the calling to serve the Church, he enrolled in the Master of Divinity program at St. Vladimir’s Seminary in Crestwood, New York. Upon completing those studies in 1999, he went to Greece to prepare for ordination in 2001.

In June of 2002, he was tonsured a monk and given the name Nektarios and immediately after was ordained to the deaconate by Metropolitan Daniel of Kaissariani, Byronos and Ymittou, in Athens.  He was made Archdeacon and served in the position for a year. On January 18, 2004, he was ordained to the Priesthood, bestowed the offikion of Archimandrite, and was assigned to the Church of the Holy Trinity in Byrona. Upon the election of Metropolitan Pavlos of the Metropolis of Kozani in 2004 (the Metropolitan was a former Proïstamenos of his parish in Astoria), he asked permission to go and serve with him.  He was assigned as Proïstamenos to the Church of Saints Constantine and Helen in Kozani.  In 2005, he was assigned the position of Vicar General of the Metropolis and served in Kozani up to 2008.

At the direction of Archbishop of America, Demetrios, he was invited to return to the United States in 2008 and served at Saint Nicholas Church Greek Orthodox in West Babylon, New York until 2012. He was then assigned as the Proïstamenos of Saint Demetrios Cathedral in Astoria, where he has served since.  In 2019, Archimandrite Nektarios was appointed by His Eminence Archbishop Elpidophoros of America as one of the five Vicars in the Archdiocesan District, and he also serves as the spiritual advisor to the Archdiocesan District Philoptochos.

Rev. Protopresbyter of the Ecumenical Throne Elias Villis was born and raised in Chicago, Illinois where he attended Holy Cross Greek Orthodox Church in Justice, Illinois. In 1994, he graduated from Hellenic College with a Bachelor of Arts in Religious Studies and, in 1997,  he graduated from Holy Greek Orthodox School of Theology with a Master of Divinity.  He was ordained to the Holy Diaconate on February 24, 1996, by the late Metropolitan Iakovos of Chicago.

On May 30, 1999, Fr. Elias was ordained to the priesthood and was appointed by Archbishop Spyridon to serve as the Proïstamenos for the Greek Orthodox Church of Our Saviour in Rye, New York where he has served for the past twenty-three years.  In 2011, he was given the offikion of Protopresbyter by Archbishop Demetrios of America and, in 2021, he was given the honorable offikion of Protopresbyter of the Ecumenical Throne by His All-Holiness Ecumenical Patriarch Bartholomew upon the recommendation of His Eminence Archbishop Elpidophoros of America.  In 2005, he was appointed director of Camp Saint Paul and, in 2020, was elected as President of the Archdiocesan District Clergy Syndesmos.  Fr. Elias and Presvytera Melanie are blessed with four beautiful children – Anastacia, Nicholas, George and Artemios and reside in Armonk, New York.