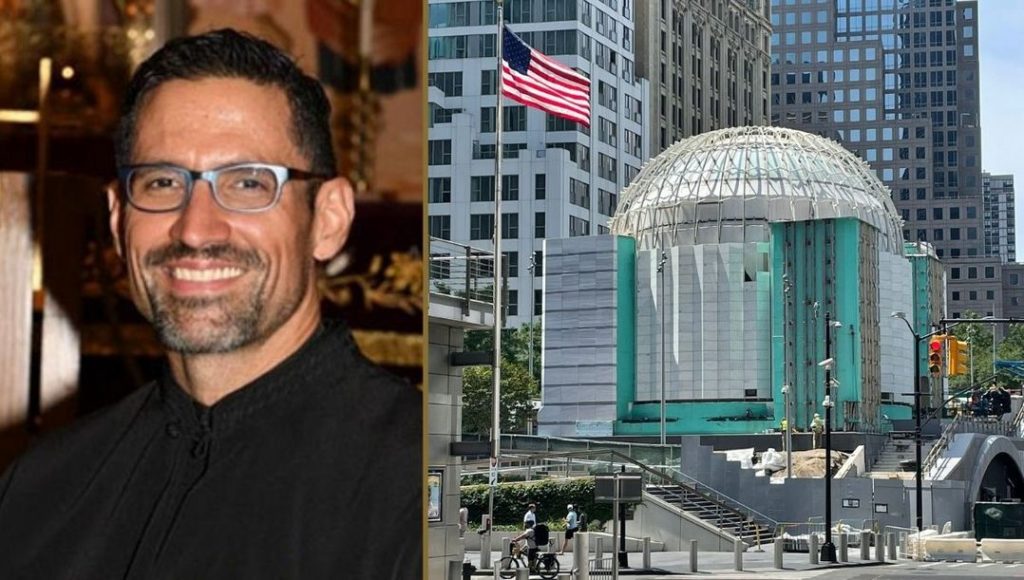 New York, NY – Today, His Eminence Archbishop Elpidophoros of America announced his appointment for the new proïstamenos (presiding priest) for the Saint Nicholas Greek Orthodox Church and National Shrine: The Reverend Protopresbyter Andreas Vithoulkas, the Chancellor of the Greek Orthodox Archdiocese of America.

The Archbishop made his announcement today in a special meeting with the Friends of Saint Nicholas (FoSN), the non-for-profit organization tasked with raising the funds to secure completion while also managing all construction issues in this final phase of rebuilding. FoSN’s Board of Directors also includes the President of the Saint Nicholas Church Parish Council. His Eminence also elevated the position of proïstamenos of the Saint Nicholas Church and National Shrine to henceforth hold the distinguished title of “Archiepiscopal Vicar.”

In his remarks to FoSN, the Archbishop stated:

The appointment comes at this time, as we prepare to illuminate the exterior of the Church officially marking the Twentieth Anniversary of 9/11. Although the Church will not commence its liturgical life until the Spring of next year, there are now pastoral decisions that require a priest-in-charge. And as Archiepiscopal Vicar for the Shrine, Father Andreas will emphasize the connectivity with the Holy Archdiocese of America, and help to build that bridge of connectivity with the Friends, once the Shrine is physically complete. Father Andreas has been an outstanding Chancellor, and as construction goes on, he will serve in a dual capacity as Chancellor for a suitable time of transition – both for the Shrine and for the Archdiocese. I have no doubt that he will navigate both roles splendidly during this period.

Dennis Mehiel, the Chairman of FoSN stated after the meeting:

Once again, the Archbishop has made the right move at the right time. We are now at the stage of construction where it makes sense for the appointment of the Parish Priest. We are gratified that His Eminence has selected Father Vithoulkas, and has granted the title of “Archiepiscopal Vicar” to him, in recognition of the enormously public role of the National Shrine.

George Mihaltses, the President of the Board of the Saint Nicholas Parish also commented:

We are deeply grateful to His Eminence for the appointment of Father Andreas to our parish. We look forward to working together with him to reconnect the parishioners of Saint Nicholas with their beloved church, welcome new members and visitors, and establish the ministries of the National Shrine. It is an exciting time for Saint Nicholas, and I know that I speak for all the members of our parish when I say to Father Andreas: “Welcome!”

Father Andreas currently serves as Chancellor of the Archdiocese — a position that he will continue to hold — and has been ministering to the Saint George Greek Orthodox Church in Midtown Manhattan. His appointment to Saint Nicholas fills a gap left since the former priest, Father John Romas, passed away five years ago. A brief biography of Father Andreas may be found here: https://bit.ly/FrAndreas