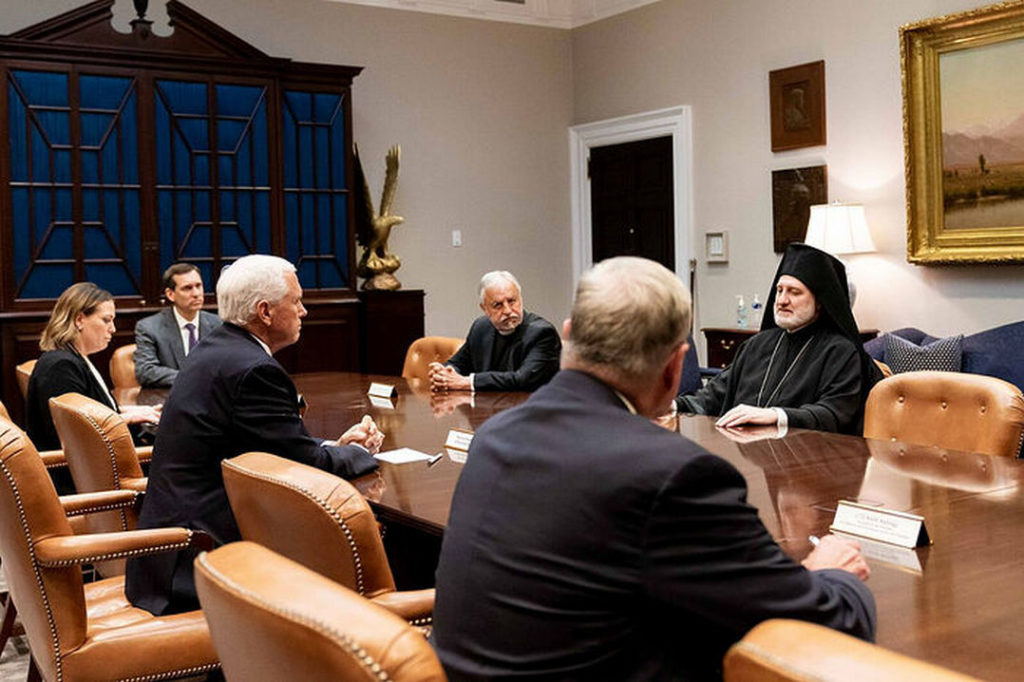 Washington, D.C.   Archbishop Elpidophoros of the Greek Orthodox Archdiocese of the Patriarchate of Constantinople met with President Trump and Vice President Pence at the White House yesterday, July 23, chiefly discussing Turkey’s sad conversion of the Agia Sophia cathedral into a mosque again.

The first Islamic prayers are being read in the UNESCO World Heritage site today, while Orthodox Christians are praying akathists to the Mother of God and churches are mournfully ringing their bells.

Today, His Eminence Archbishop Elpidophoros met with President Trump and Vice President Mike Pence at the White House on the concerns of the Ecumenical Patriarchate and the Greek Orthodox Archdiocese over the seizure and re-conversion of the Hagia Sophia into a mosque.

Following the meeting with the President and Vice President, the Archbishop stated:

“I am grateful to have met with President Trump and Vice President Pence in the White House and communicated our grave dismay at the re-conversion of Hagia Sophia into a mosque, as well as ongoing security concerns for the Ecumenical Patriarchate and issues of religious liberty. In view of tomorrow’s day of mourning, we persevere in prayer but also bring our struggle to the highest levels of government for action and consideration.”

In an interview following his meeting with the heads of state, Abp. Elpidophoros noted that this mournful event also raises questions about the future of minorities in Turkey:​

President Trump also expressed concern for the protection of human rights and religious freedom in Turkey and promised that he would intervene in the situation, as a supporter of the Patriarchate of Constantinople and of Hellenism.

Following the meeting, Vice President Pence tweeted: “America will stand firm with the Greek Orthodox Church in the call for Hagia Sophia to remain accessible as a source of inspiration and reflection for every person of every faith.”

“Protecting Religious Freedom at home and abroad is a foreign policy priority for the United States of America. We cherish the faith and charitable works of the 1.5 million members of the Greek Orthodox Church in the United States,” he added.

The Archbishop was accompanied by Fr. Alexander Karloutsos.

Abp. Elpidophoros also met with President Trump and VP Pence last July, soon after he was enthroned as the Greek Archbishop of America.