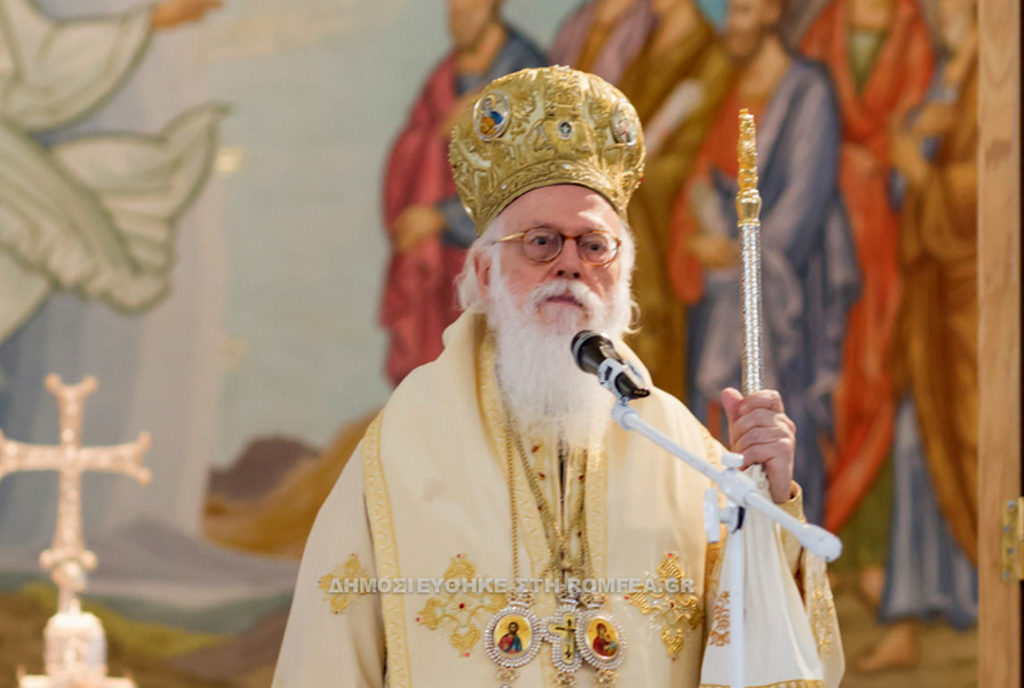 Kiev – Patriarch Bartholomew’s relations with the primates of the Local Orthodox Churches around the world have turned tense thanks to the Ukrainian issue, says His Grace Bishop Victor of Baryshev, the canonical Ukrainian Orthodox Church’s representative to European international organizations.

In particular, things have turned sour between the Phanar and His Beatitude Archbishop Anastasios of Albania and His Beatitude Archbishop Chrysostomos of Cyprus. The former has even received insulting letters from hierarchs in the Patriarchate of Constantinople because of his position on the Ukrainian crisis, Bp. Victor said on the program “Right to Faith” on the First Cossack YouTube channel on Monday.

Among the Churches that have taken a clear canonical position in regard to the schismatic “Orthodox Church of Ukraine,” Bp. Victor mentions the Albanian Church, recalling that Abp. Anastasios “wrote two very detailed, deep, and correct letters” to Pat. Bartholomew on the matter.

In a letter to His Holiness Patriarch Kirill last October, Abp. Anastasios said that Constantinople’s Ukrainian autocephaly project “will become a walk through a minefield.” His letter was dated one day before the Synod of Constantinople decided to lift the anathema against and to enter into communion with Philaret Denisenko, a man whose actions Abp. Anastasios earlier said were “demonic” and had “nothing to do with Christ.”

The Albanian primate warned that Constantinople’s actions would only deepen the schism in Ukraine, and the past year has proven him correct. However, while the Archbishop does not stand with Constantinople on this matter, he also deeply disagrees with the Russian Church’s decision to break communion with Constantinople.

On December 24, Pat. Bartholomew wrote to all the Orthodox primates, entreating them to recognize the new Ukrainian church. In January, Abp. Anastasios replied, emphasizing that the hierarchs and clergy of the new church have no grace of the priesthood and thus cannot constitute a church or be commemorated in the diptychs.

Pat. Bartholomew replied in February, informing Abp. Anastasios that his duty was simply to ratify the wise decisions of Constantinople, and pointing to several historical events in Church history that he believes justifies his decision to receive graceless schismatics without repentance. In March, Abp. Anastasios again replied, refuting the Patriarch’s examples.

The Albanian Church’s stand came as a surprise to many, as Abp. Anastasios was sent to serve in Albania by Pat. Bartholomew himself and the two have always been close, and the Albanian Church is known to have traditionally been in Constantinople’s sphere of influence.

This surprise also caused deep dissatisfaction and resentment within the Patriarchate of Constantinople it seems.

“According to our information,” Bp Victor says, “His Beatitude Archbishop Anastasios, who is a very respected person and respected primate of a Church in global Orthodoxy, received insulting letters from several metropolitans of the Patriarchate of Constantinople because he allegedly did not support the decision of Patriarch Bartholomew.”

It is unclear why Bp. Victor said “allegedly,” as the Albanian Church’s stance is publicly known. However, Pat. Bartholomew and other Constantinople representatives have also publicly stated that they feel the Patriarch and Patriarchate are being slandered and disrespected by those who dare to take issue with its unilateral invasion of Ukrainian Church territory.

In addition, His Abp. Chrysostomos of Cyprus, who tried to find a resolution to the crisis created by Pat. Bartholomew’s ill-conceived plans in Ukraine and to help the Patriarch save face, “now has a difficult relationship with Patriarch Bartholomew, because he did not support his initiative.”

Abp. Chrysostomos held a joint meeting with the patriarchs of the ancient Churches of Alexandria, Antioch, and Jerusalem, and later met individually with the primates of Greece, Serbia, and Bulgaria, trying to build a consensus for how to move forward in this crisis situation. His Beatitude stopped his travels before he could meet with all the primates when he learned that Pat. Bartholomew was not pleased with his efforts at conciliarity.

Bp. Victor believes that these facts indicate that “there is a situation of tense relations between Patriarch Bartholomew and the primates of the Orthodox Churches, with those who have already expressed themselves on this theme, with those who tried to participate in this process usefully, with a desire to find a way out.”

While Pat. Bartholomew was certain that granting a tomos of autocephaly to a new church amalgamated out of two schismatic structures with no legitimate ordinations would bring unity in Ukraine, “there is only an aggravation of the division,” according to Bp. Victor.