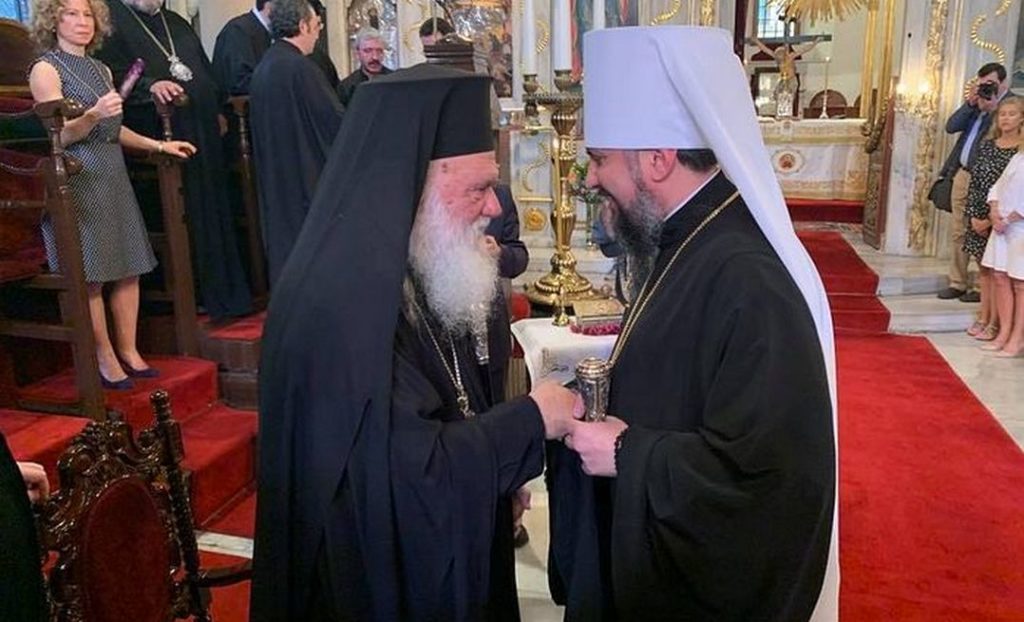 Istanbul, June 10, 2019 — The primate of the schismatic-nationalist Ukrainian church created by the Patriarchate of Constantinople in December, “Metropolitan” Epiphany Dumenko, traveled to Istanbul today to congratulate Patriarch Bartholomew on his name’s day, which will be celebrated tomorrow, reports the press service of the “Orthodox Church of Ukraine.”

Vespers for the new calendar feast of the apostle St. Bartholomew was served at the Monastery of the Lifegiving Spring, during which Pat. Bartholomew and “Met.” Epiphany prayed, along with His Beatitude Archbishop Ieronymos of Athens and All Greece, who also arrived to celebrate the Patriarch’s name’s day.

It was announced that Abp. Ieronymos would visit the Patriarchate after Pat. Bartholomew’s recent visit to Athens, though it is not known whether the Greek primate knew that Epiphany would be present.

Epiphany and Abp. Ieronymos greeted one another and were seated next to one another throughout the Vespers service, marking Epiphany’s first meeting with the primate of a Local Church besides Pat. Bartholomew.

The Greek Church has not recognized the OCU, though it has been reported that its two Synodal commissions tasked with examining the Ukrainian issue have suggested that it do so. Epiphany and others have stated several times that they expect the Greek Church to be the first to recognize them, other than the Patriarchate of Constantinople.

After Vespers, Epiphany offered a few words to Pat. Bartholomew and also greeted Abp. Ieronymos and offered him an episcopal Panagia in honor of his own enthronement, which took place on February 3.

Epiphany then served a litia at the tombs of the deceased patriarchs who are buried in the monastery.

On May 26, the OCU “consecrated” a former archimandrite of the Greek Church as a “bishop” to serve Greek-speakers in Ukraine. Archimandrite Epiphanius (Dimitriou) was reportedly released by his hierarch His Eminence Metropolitan Ingatius of Demetrias and Almyros of the Greek Church, though the metropolis has not responded to several requests for confirmation.

A few days later, the new “bishop” traveled to Fthiotida, Greece where he was received by His Eminence Metropolitan Nicholas of Fthiotida of the Greek Church.