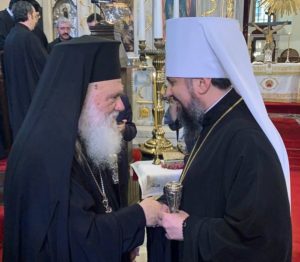 ATHENS — While the stance of the Archbishop Ieronymos, the primate of the Greek Orthodox Church, towards the schismatic “Orthodox Church of Ukraine” remained unclear after the Bishops’ Council of the Greek Church on October 12, it has now been clarified.

As Romfea and Orthodox Times both report, Abp. Ieronymos sent an “irenic letter” to “Metropolitan” Epiphany Dumenko, the primate of the schismatic OCU on October 21.

According to established tradition, every new primate of a Local Church sends “irenic letters” to the primates of the other Local Churches of the Orthodox Church, officially announcing his elevation. Response letters from the other primates constitute an official recognition of the new primate.

“It is with great pleasure that we received Patriarchal letter No. 1119 of December 24, 2018, from which we learned of the initiative and the actions of the First Throne and Firstly-Responsible Church of Constantinople, which having favorably considered the question concerning you and the hierarchs around you, and the holy clergy and people faithful to the Lord, put in order the division in the flock of our Archpastor and Lord and Savior. We also learned of the Synodal consideration by the Holy and Sacred Synod of the Ecumenical Patriarchate of the proclamation of autocephaly and self-government of the Holy Church of Ukraine, marked by the same rights and obligations that other Autocephalous Churches have,” Abp. Ieronymos writes to Epiphany Dumenko.

He also notes that he is sending his congratulations on behalf of his entire Church:

“We have sent to Your Beatitude our sincere personal congratulations, and of the Holy Hierarchy and pious clergy and God-loving people of the Holy Greek Church and our wishes for the enlightenment and support of the Divine Trinity in the performance of Your new and responsible duties as the primate of the Ukrainian Church,” the Greek primate continues.

“We also rejoice in the good news that common aspirations and actions have been crowned with success and that the barrier that stood between You and us, Orthodox and brothers in everything, the barrier that separated us, bringing sadness, major scandals, and great harm to the whole Church and the joint witness of Orthodoxy in the modern world, has been destroyed,” he continues.

Abp. Ieronymos also wishes Epiphany “to free the Church of Ukraine completely from the anxiety that has stirred it, destroying its unity, and restore it to full peace, tranquility, and stability for the glory of God and the entire ecumene of Orthodoxy.”

Following the session of the Bishops’ Council of the Greek Church in which the hierarchs recognized Constantinople’s right to grant autocephaly in Ukraine and Abp. Ieronymos’ authority to resolve the issue of recognition for the Greek Church, the Russian Holy Synod authorized His Holiness Patriarch Kirill to remove Abp. Ieronymos’ name from the diptychs of the Russian Church in the event that he officially recognizes Epiphany and the OCU. At the session, Abp. Ieronymos recommended recognizing the OCU.

The Russian Synod also announced at that time that it “ceases prayerful and Eucharistic communication with those bishops of the Greek Church who have entered or will enter into such communication with representatives of the Ukrainian non-canonical schismatic communities.”

On October 19, Abp. Ieronymos concelebrated the Divine Liturgy with Patriarch Bartholomew of Constantinople in Thessaloniki, at which the latter commemorated Epiphany Dumenko as a primate of a Local Church. However, at that time the Russian Church exercised patience and withheld judgment against Abp. Ieronymos, considering that it was only Pat. Bartholomew who commemorated Epiphany.

However, it is now known that Abp. Ieronymos sent his official recognition of the OCU just two days later.