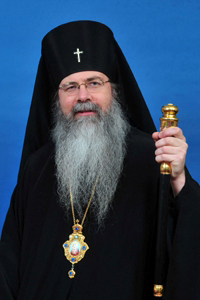 Six hundred and sixty three hierarchs, clergy and lay delegates and observers representing OCA parishes across the US, Canada and Alaska participated in the Council. Five hundred and ninety were eligible to vote.

“Christ grows brighter as we grow dimmer, as we approach the eternal light,” said His Eminence, Archbishop Nathaniel of Detroit and the Romanian Episcopate, Locum Tenens of the Metropolitan See, in his opening address. “And it is within this context that we gather today for one purpose: to glorify Father, Son and Holy Spirit… and to elect the Primate of the Orthodox Church in America.”

No single candidate received the required two-thirds margin on the first ballot. On the second ballot, His Eminence, Archbishop Tikhon of Philadelphia and Eastern Pennsylvania and His Grace, Bishop Michael of New York and New Jersey, received 317 and 355 votes respectively.

The members of the Holy Synod retired into the altar where they elected Archbishop Tikhon.

Podcasts of the Council proceedings may be accessed on Ancient Faith Radio.