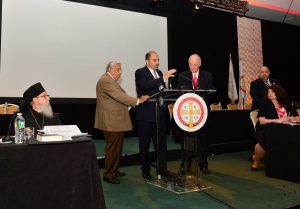 42nd Clergy Congress of the Greek Orthodox Archdiocese of America

NEW YORK – Archdiocesan Finance Committee Chairman George Vourvoulias, although his position is a volunteer one, received $900,000 from the Archdiocese over the past ten years for travel expenses.

The National Herald has learned that this discovery was made by the newly appointed CFO, Fr. Soterios Baroody, who reported the finding to Archbishop Demetrios. In turn, Demetrios asked Vourvoulias for an explanation and directed the Finance Department to cut off money transfers to Vourvoulias.

The archbishop, Vourvoulias, Baroody, and recently ousted Executive Director of Administration Jerry Dimitriou, all did not respond to TNH’s request for comment.

Executive Committee Secretary Catherine Bouffides-Walsh, an attorney, directly asked Vourvoulias at the Committee’s September 19 emergency meeting if in fact he had received the $900,000. At first, Vourvoulias denied it, but Walsh then stated there was evidence, at which point Vourvoulias said the money was for travel expenses from Chicago to New York and other U.S. cities for Finance Committee meetings.

Vourvoulias also said that the money was authorized by then-Vice Chairman of the Archdiocesan Council Michael Jaharis, and by then-General Legal Counsel Manny Demos. But both men are now deceased.

There is no apparent evidence to support Vourvoulias’ claims, and the archbishop claims not to know anything about it as well.

Walsh, Archdiocesan Chancellor Bishop Andonios of Phasiane, Council Vice Chair George Tsandikos, and George Papadakos, who is in charge of finances, also did not respond to TNH’s request for comment.

A Finance Committee member proposed to Vourvoulias that he and the entire Committee ought to resign, while reading TNH’s articles about the Archdiocese’s dire state of impending bankruptcy due to an $8.5 million deficit, and about Dimitriou’s removal, staff layoffs, and reductions in departmental budgets.

TNH has obtained correspondence on September 14 between Committee members and Fr. Theodore Barbas, Chancellor of the Boston Metropolis, who discarded the notion of mass resignations and praised Vourvoulias and Dimitriou.

Among other things, he wrote: “Thank you all for your beautiful comments and suggestions.I add my voice of thanksgiving and appreciation to our National Finance Committee Chairman, Mr. George Vourvoulias, and also to our past co-chair, Mr. George Matthews, as well as to Mr. Jerry Dimitriou, who served our Holy Archdiocese with distinction for decades.Under their loving and patient guidance, along with that of my former co-chair of the National Stewardship Committee, Mr. Ron Harb, I have learned a great deal especially during my formative years as a new, young chancellor.“They mentored me, supported me and assisted me as I exercised the responsibilities of my diakonia to the Church.For that, and for their love and friendship, I express my heartfelt love, support, appreciation and gratitude.I pray that the Lord will guide these difficult days towards a stronger unity within our Archdiocese.”Ii is reminded here that Fr. Barbas is chancellor and the closest confidant of Metropolitan Methodios of Boston.”Also Fr. George Livanos from Pennsylvania also refused the idea of resignation and aligned with Fr. Barbas.

At the last Archdiocesan Council meeting in Chicago shortly before summer, George Matthews from Atlanta suddenly resigned as Vice Chairman of the Finance Committee without any explanation. It was at that meeting that the issue of the uniformed salary of the metropolitans was discussed and decided, not taking into consideration the years of service or ordination seniority.

At every Council meeting and Clergy-Laity Congress, Vourvoulias and Dimitriou painted rosy pictures of the Archdiocese’s finances, and about the progress of “national ministries,” while in reality the opposite was true.

Vourvoulias who is also an Archon of the Ecumenical Patriarchate, was appointed to the chairmanship of the Finance Committee in 2006 by Demetrios, on Dimitriou’s recommendation.

The appointment was at the Clergy-Laity Congress that year, in Nashville, TN, where it was decided that the system of the annual “taxation” of the parishes would change. Until then, the parishes gave 15% of their annual income. Because many parishes were hiding their actual income, it was decided without any warning to the parishes or any preparation that they would be “taxed” on their expenses so that the Archdiocese gets the maximum.

Vourvoulias, from Chicago, is in the catering business.

Share. Twitter Facebook Pinterest LinkedIn Tumblr Email
Previous ArticleThe Russian Orthodox Church has issued a challenge to the West
Next Article Annual Payments by the Parishes of New England to the Archdiocese are Revealing and Interesting