[ditty_news_ticker id="27897"] Archimandrite Alexander [Golitzin] to be Consecrated to the Episcopacy in Toledo May 4-6, 2012 - Orthodox Christian Laity 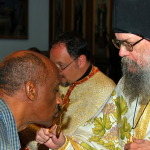 His Beatitude, Metropolitan Jonah, and the members of the Holy Synod of Bishops of the Orthodox Church in America will consecrate Archimandrite Alexander [Golitzin] to the episcopacy at Saint George Cathedral here Saturday, May 5, 2012.

On October 4, 2011, the members of the Holy Synod canonically elected Archimandrite Alexander to the vacant See of Toledo and the OCA’s Bulgarian Diocese. The election followed a year-long search on the part of the diocese, during which a number of candidates to fill the See proclaimed vacant upon the repose of His Eminence, the late Archbishop Kyrill, were considered. He was nominated by delegates to the diocese’s Fifth Congress-Sobor June 9, 2011.

The consecration weekend will begin with the celebration of Vespers at the cathedral on Friday, May 4, at 7:00 p.m. During Vespers, Archimandrite Alexander will make his profession of faith before the members of the Holy Synod of Bishops. A reception will follow in the cathedral hall.

At 9:00 a.m. on Saturday, May 5, Metropolitan Jonah will be greeted at the cathedral entrance, after which he will join his brother hierarchs for the Consecration Divine Liturgy. A banquet will follow in the cathedral hall. Great Vespers will be celebrated at 6:00 p.m.

On Sunday, May 6, Bishop Alexander will serve the Divine Liturgy at the cathedral at 9:30 a.m., at which time he will be enthroned. A brunch will follow in the cathedral hall.

Raised at Saint Innocent Church, Tarzana, CA, Archimandrite Alexander received a Bachelor of Arts degree in English from the University of California at Berkeley and a Master of Divinity degree from Saint Vladimir’s Seminary. He spent seven years pursuing doctoral studies at Oxford University in England under His Eminence, Metropolitan Kallistos [Ware]. During this time, he also spent two years in Greece, including one year at Simonos Petras Monastery on Mount Athos.

After receiving his Doctorate in Philosophy in 1980, he returned to the US, where he was ordained to the diaconate in January 1982 and to the priesthood two years later. In 1986, he was tonsured to monastic orders. He served OCA missions in northern California and headed the Diocese of the West’s mission committee. In 1989, he accepted a teaching position in the Theology Department of Milwaukee’s Marquette University, a position that he held until recently. Concurrently, he was attached to the city’s Saints Cyril and Methodius Church.

The Bulgarian Diocese includes 19 parishes and missions and one monastery.

Additional information concerning the consecration, banquet, housing and transportation has been sent to all parishes of the Bulgarian Diocese and may be found on the diocesan web site. Questions may be directed to Saint George Cathedral at 419-662-3922.