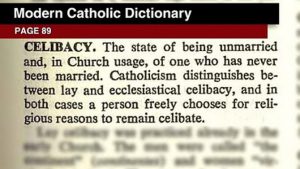 There are two types of clergy pastoring at the parishes of the Greek Orthodox Archdiocese of America and as a matter of fact in the parishes of the Orthodox Church throughout the world, the married priests with a wife and children and the celibate priests who usually are holders of the officio of Archimandrite.

Let me explain that the Archimandrite is basically the priest monk, in other words the monk who has been ordained a priest, who lives and acts in the world and not in the monastery where he actually belongs.

The phenomenon of the celibate priests serving in parishes is not contemporary. What surprises today is the fact that a new order of clergy has been created, the order of Archimandritisism, which is the stepping stone towards the Episcopacy. Many times I am wondering why the Archimandrites have acquired privileges toward the married clergy during the Liturgy and the Sacred Services with their only “asset” their celibacy.

It is sad to see married priests, well educated, well-respected, excellent family men who have contributed so much to the life of the Church to be forced aside during the Liturgy and the Sacred Services and young and mostly mediocre Archimandrites to officiate.

It is a shame to see some of those Archimandrites to show off their vestments and their epanokalimaychon in an effeminate way, hugging their cross without self-realization of who they are and what do they represent.

The Archimandrites usually make efforts and they glue on powerful hierarchs and they start the trips and the gifts to the Phanar, where they establish friendships with hierarchs and clerics there with access to the Patriarch having one and only aim to become Bishops. Their only privilege most of the times is their celibacy whatever quality of celibacy they have.

Some sick phenomena that appear many times here and elsewhere involving celibate priests do not seem to bother the high-ranking administrative officials of the Church, since more or less there is in place a cycle or club if you wish which covers up one another. And yet the Church, the People of God, with their contributions, donations, trays and candles pay for their salaries and their lavish lifestyles.

The scandals caused by some clergy are known to the People of God. Pederasty and homosexuality are not exclusive to celibate clergy, because the sick cases of Nicholas Katinas and Adamantios Metropoulos and others prove exactly that married priests are also disturbed, but the truth of the matter is that the percentages are much less than those of the celibate.

Of course, other married priests proved to be extremely hypocritical, as it was the scandal of George Passias, which shook the Church not only in the United States but everywhere in the world. Luke Melackrinos is another disturbing case that occurred a few weeks ago, one that is typically representative of hypocritical pietism and fundamentalism with big crosses and confessions, and the like.

I will say it one more time: the problems with the priests start at the School of Theology, where the root of hypocritical fundamentalism flourishes.

Of course there are some celibate priests who are real pearls, “men full of grace and truth,” but they can be counted on the fingers of one hand.

Personally I respect and honor the true, authentic, and healthy monasticism because it is the joyful sadness of the Church. But when I see career celibates who live in the world lavishly, two things come to my mind: they are saints, or they are sick, I don’t believe there is a middle ground.

I think this sickening situation with the forced celibacy of the Archimandrites cannot continue any longer. It is time to return to the original Tradition of the Church of the married Bishops. They should be selected married priests well educated, with mind of Christ, with a spirit of pastoral sacrifices and sensitivity, healthy, psychologically well and sexually normal.

Let the Archimandrites and the celibates go where they belong, to the Monasteries.