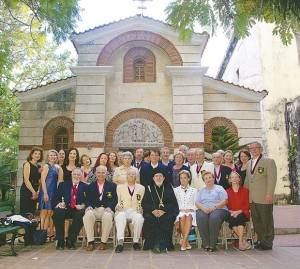 Archons and other guests pause for a commemorative photo before St. Nicholas Cathedral with Metropolitan Athenagoras.

HAVANA, CUBA – More than 80 Archons and Greek Orthodox faithful journeyed to Havana, Cuba for a 6-day pilgrimage to visit Saint Nicholas Greek Orthodox Cathedral from December 5 to 10. The pilgrimage was sponsored by the Order of St Andrew and led by its spiritual advisor, Father Alexander Karloutsos, Protopresbyter of the Ecumenical Patriarchate.

The trip culminated in a celebration of the Feast of Saint Nicholas and took place under the auspices of His Eminence Metropolitan Athenagoras.

The trip was remarkable in the context of modern Cuba. “On the first night, the pilgrims attended Vespers at Saint Nicholas Greek Orthodox Church. Afterwards, a procession of the faithful followed through the streets of Havana, and around the Church, led by Archons, Dr. Lewis Assley and Stephen Kalivas, holding the icon of Saint Nicholas. The following day, all attended Divine Liturgy at Saint Nicholas Church in celebration of the Feast Day,” according to the press release.

Archons other guests pause for a commemorative photo before St. Nicholas Cathedral with Metropolitan Athenagoras.
When the Cathedral was approved, it was the first time since the Cuban Revolution that permission was given for the building of a new church in Havana.

The participants in the pilgrimage experienced fellowship and hospitality at a reception.

“The beautiful Byzantine-style Cathedral is decorated with Greek mosaics, icons, and candelabras, and has a hand-carved wooden altar. It was built in a garden of the Basilica Menor of San Francisco de Assis, at the port side in Colonial Havana, a UNESCO World Heritage Site. Upon the official invitation of former President Fidel Castro, in January 2004, Ecumenical Patriarch Bartholomew made a five-day official visit to Cuba, consecrating the new St. Nicholas Cathedral. Former President Fidel Castro presented the key of the Cathedral to the spiritual leader of the world’s 250 million Orthodox Christians. His All Holiness invited Archbishop Demetrios of America to accompany him on his historic first-ever visit to a Latin American nation. The giving of the church by Fidel Castro was a historic event marking the potential for a new era in Cuban history and accentuating the increasing role of Orthodox missions around the world.”

Archons from the United States participate in a moving religious procession through streets of Havana, a remarkable sight in the context of modern Cuba.

There were a number of memorable events according to the release, including:

“The baptisms of five Cubans to the Greek Orthodox faith. The happiness and enthusiasm on their faces was heartwarming to all of the pilgrims from the USA.

“On Sunday, December 9, after Liturgy, members of the Cuban parish – both children and adults – impressed the group with a wonderful performance which included songs in Spanish, English and Greek and a rendition of The Old Man and the Sea, a novel written by Ernest Hemingway. The group was hosted to lunch by the parishioners in the beautiful gardens behind the church.

“The Cuban government hosted an unforgettable concert in honor of the Order of St Andrew at the Baroque Basilica of San Francisco de Assis which is next to the church and towers over the square, Plaza de San Francisco de Assis. The church now serves as a concert hall and museum. From the bell tower (138 feet high), one has a wonderful view of Old Havana and its harbor.”

His Excellency Stavros Loizides, The Cypriot Ambassador, hosted a cocktail reception in the garden of his residence. In addition to an official from the American Mission to the US Interest Section, the Russian, Serbian and Austrian Ambassadors were also present, and a breakfast meeting was hosted by the Greek Ambassador, His Excellency Pantelis Carcabassis.