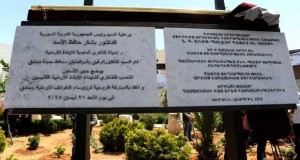 Foundation stone of the memorial monument of the Armenian Genocide in Bab Sharqi – Damascus.

YEREVAN, April 27. /ARKA/. A memorial devoted to the centenary of the Armenian genocide in Ottoman Turkey will be installed in the historical part of Damascus, Bab-Sharqi, with the names of the victims, Novosti-Armenia reported referring to RIA Novosti.

The foundation stone laying ceremony took place on Sunday, attended by the head of the Armenian Orthodox Patriarchate of Damascus Armash Nalbandyan and Patriarch of the Syrian Orthodox Church of Antioch Ignatius Afram II.
A procession through historical part of Damascus was held toward the place where the monument will be erected, despite the security threats and possible provocations by extremists, to remark the centenary of the Armenian genocide in Ottoman Turkey. Bishop Nalbandyan urged the Turkish government during the service in Saint Sargis church to recognize the Armenian genocide and condemn it.
The Armenian community in Syria numbers at various estimates 100,000 people. The largest community is in Aleppo (60,000). Clashes between government troops and armed opposition in Syria have forced thousands of Armenians to flee their homes there.