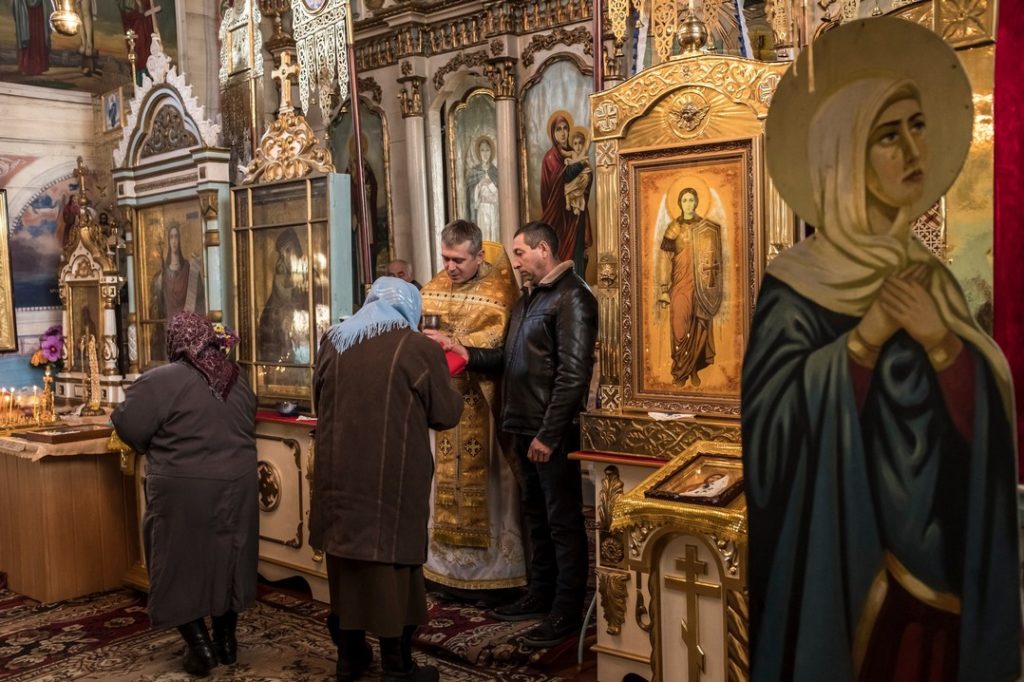 “I had no idea what they wanted and still don’t,” said The Rev. Oleksandr Kolesov, a Russian Orthodox priest in Ukraine who was interrogated by the Ukrainian security agency. Credit Brendan Hoffman for The New York Times

CHERNYTSYA, Ukraine — Ukraine is on the verge of opening the biggest schism in Christianity in centuries, as it breaks from the authority of a Moscow-based patriarch and this week expects to formally gain recognition for its own church, taking tens of millions of followers.

“They just want to frighten us,” said the Rev. Vasily Nachev, one of more than a dozen priests loyal to the Moscow patriarch who were called in for questioning.

The new Ukrainian church is expected to be granted legitimacy on Jan. 6, the eve of the Orthodox Christmas, when its newly elected head, Metropolitan Epiphanius, travels to Istanbul to receive an official charter from the Constantinople patriarchate, a longtime rival power center to Moscow.

The prospect of a new and entirely autonomous church in Ukraine has sent Russia’s political and religious leaders into fits of indignation, even raising fears that Moscow will try to sabotage the project by force. 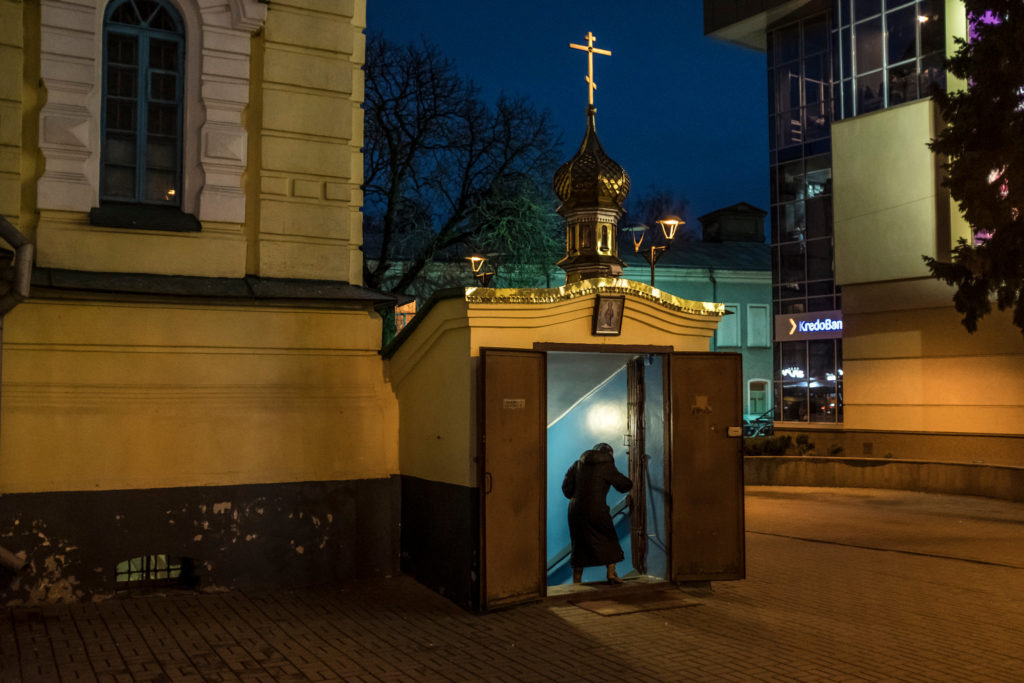 A worshiper entering the basement of the Church of the Archangel Michael in Rivne, Ukraine, where the Moscow-led Orthodox branch holds services. Credit Brendan Hoffman for The New York Times

Vasyl Hrytsak, the chief of the Security Service of Ukraine, or S.B.U., warned in December that the rift “may become a pretext for open military invasion by the Russian Federation’s armed forces of our country.”

Fueling Ukraine’s fears is that some Orthodox priests loyal to Moscow sided openly with Russian-backed separatists who seized chunks of eastern Ukraine in 2014, when Moscow annexed Crimea.

As the conflict in the east grinds on, religious affiliation has become a litmus test of national loyalty, with the deeply unpopular Ukrainian president hoping to win another term in March on the nationalist slogan “army, language, faith.”

On the other side, President Vladimir V. Putin of Russia, having promoted himself for years as a defender of Russia’s reach as an Orthodox power, also has a keen political interest and desperately wants to keep Ukraine under the wing of the Moscow patriarch.

Speaking at his annual news conference in Moscow in December, Mr. Putin signaled Russia’s determination to resist the rupture, warning that any redistribution of property as part of the fissure “could turn into a heavy dispute, if not bloodshed.” 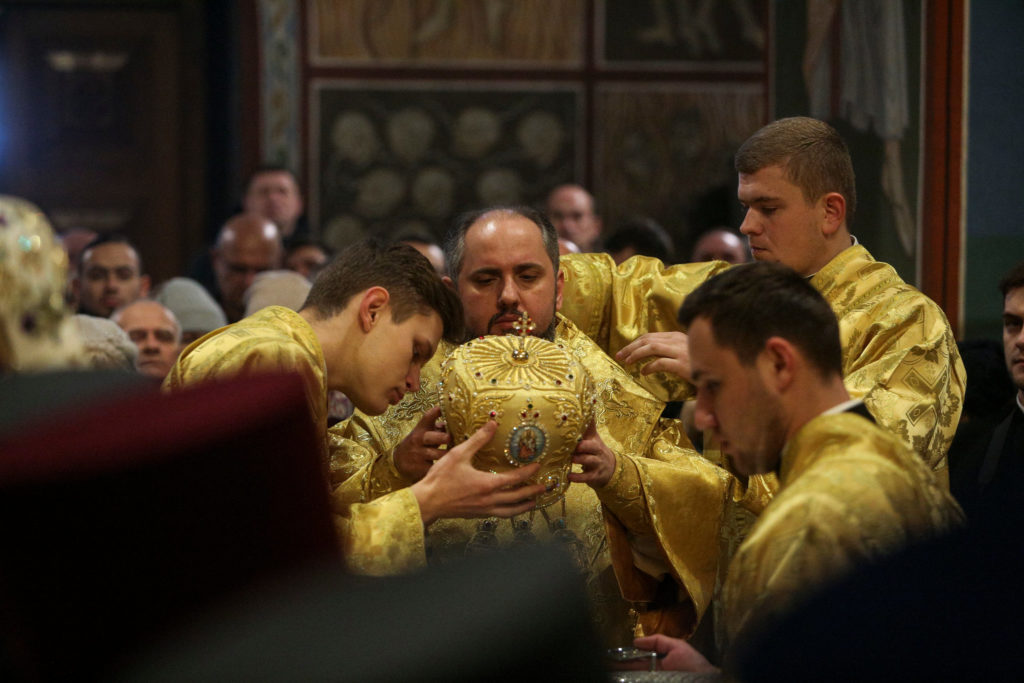 A Fight Over Identity

Behind a flurry of archaic fire-and-brimstone insults and arcane quarrels over canonical law lies a thoroughly modern fight over money, property, political power and identity, both Russian and Ukrainian.

The Ukrainian church has been under Moscow’s jurisdiction since 1686, when, under pressure from Russia, it abandoned allegiance to Constantinople, the historical seat of the Eastern Orthodox Church now known as Istanbul.

But in December, Ukraine’s president, Petro O. Poroshenko, and nearly 200 bishops and other church figures gathered in St. Sophia’s Cathedral in Kiev, the capital, to choose the head of a new autonomous Ukrainian church, sealing the country’s intention to sever religious ties to the Moscow patriarch, Kirill I.

The Moscow patriarch claims oversight over Orthodox communities in Russia and most of the areas of the former Soviet Union and has been struggling since Ukraine’s declaration of independence in 1991 to maintain a hold over what his church views as a wayward province. 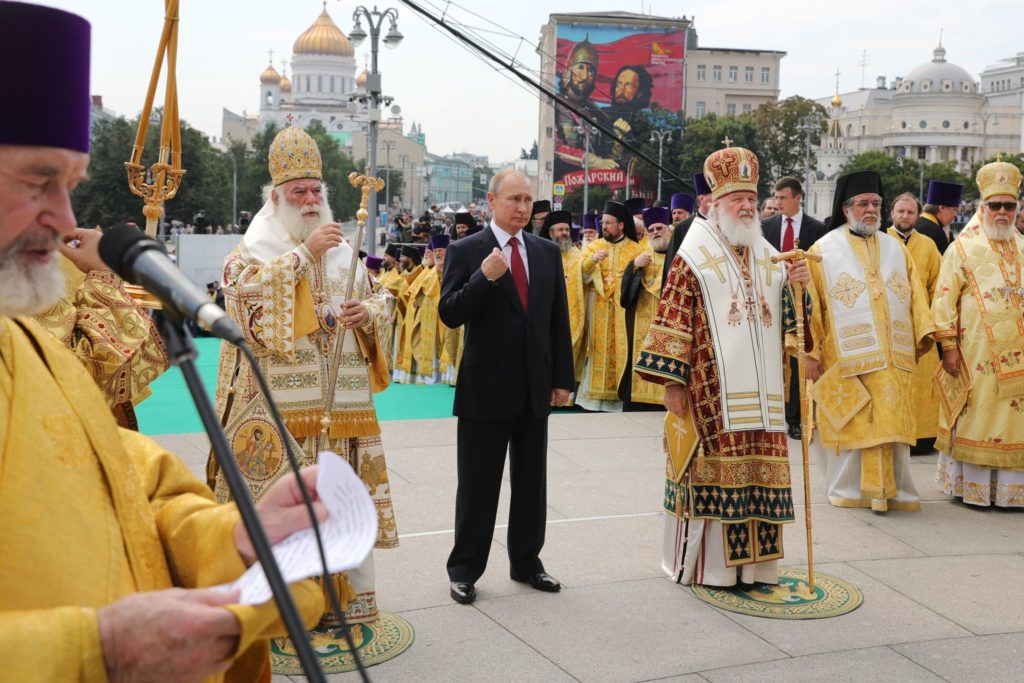 Patriarch Kirill I of Moscow, fourth from left, is a close ally of President Vladimir V. Putin of Russia. The patriarch has reviled the new Ukrainian church as “serving the devil.”Credit Pool photo by Mikhail Klimentyev

The Rev. Oleksandr Kolesov, an Orthodox priest in Chernytsya, a village with two streets, one shop, and no real crime, was baffled when Ukraine’s security services urgently summoned him in December for interrogation in a case relating to treason and the incitement of religious and ethnic hatred.

“I had no idea what they wanted and still don’t,” Father Kolesov said.

When he turned up at the agency’s regional headquarters, he found 11 other anxious and equally mystified priests. But they all had one thing in common: loyalty to the Moscow patriarch, a close ally of Mr. Putin who has reviled the new Ukrainian church as “serving the devil.”

The Ukrainian security service’s involvement is a measure of how entangled church affairs have become with the secular interests of the state, both in Ukraine and Russia, whose own security services have long interfered in religious matters.

“They just want to create their own pocket church and divide people,” said Bishop Pimen, the senior Moscow Patriarchate priest in Rivne, the capital of the western region that is the focus of a treason investigation by the Ukrainian security service.

Both Russia and Ukraine trace their origins to a 10th-century federation of Slavic peoples that embraced Christianity, called the Kievan Rus’, and are fighting to claim the mantle of Orthodoxy for themselves. 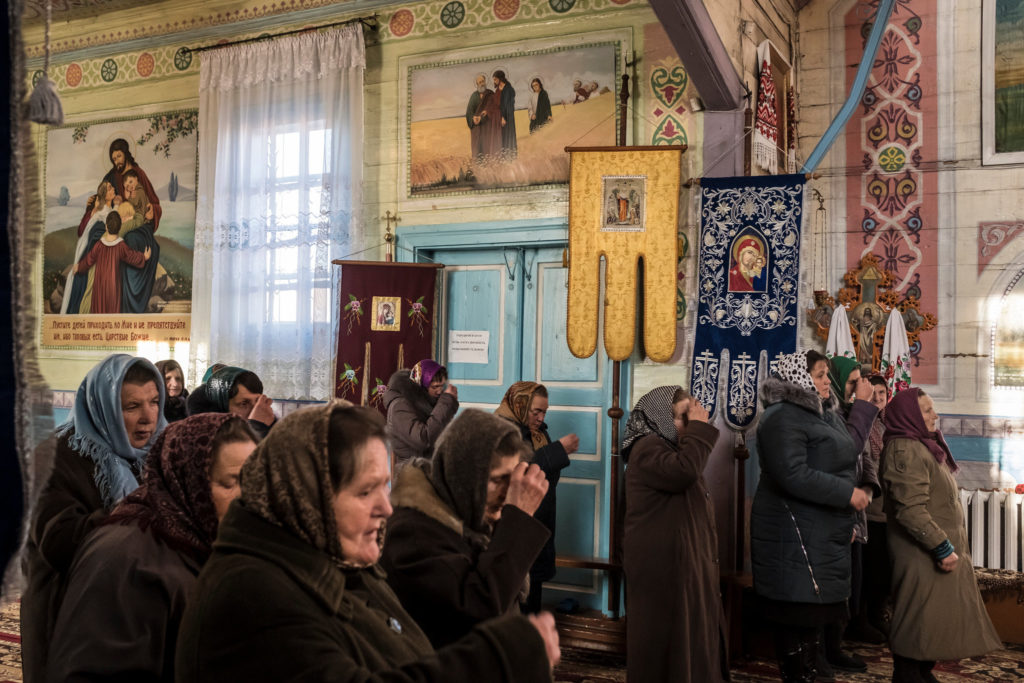 For Russia under Mr. Putin that means the right to assert itself as a religious and moral as well as military power through command of the Orthodox church.

Keeping Ukraine under the Moscow-led church is vital for Russian claims on a millennium of history stretching back to Kievan Rus’. Vladimir the Great, a 10th-century Kiev prince who converted to Christianity, is celebrated in Moscow, where Mr. Putin unveiled a giant statue of him near the Kremlin in 2016, honoring Vladimir as one of the founders of the Russian state.

For Ukraine, however, the history and Orthodox primacy claimed by Russia are in fact Ukrainian and must be returned. “This is not part of Russia’s history but of a separate Ukrainian identity,” said Andrij Yurash, director of the department for religious affairs at Ukraine’s Ministry of Culture.

The Ukrainian security service, he said, was not persecuting believers who want to remain under the Moscow patriarchate. It was only trying to “install real religious equality” by cracking down on priests who effectively supported Ukraine’s enemy.

The feud threatens what had been a sometimes tense but generally nonviolent division of property between Ukrainian priests loyal to Moscow and those who sought to break away. 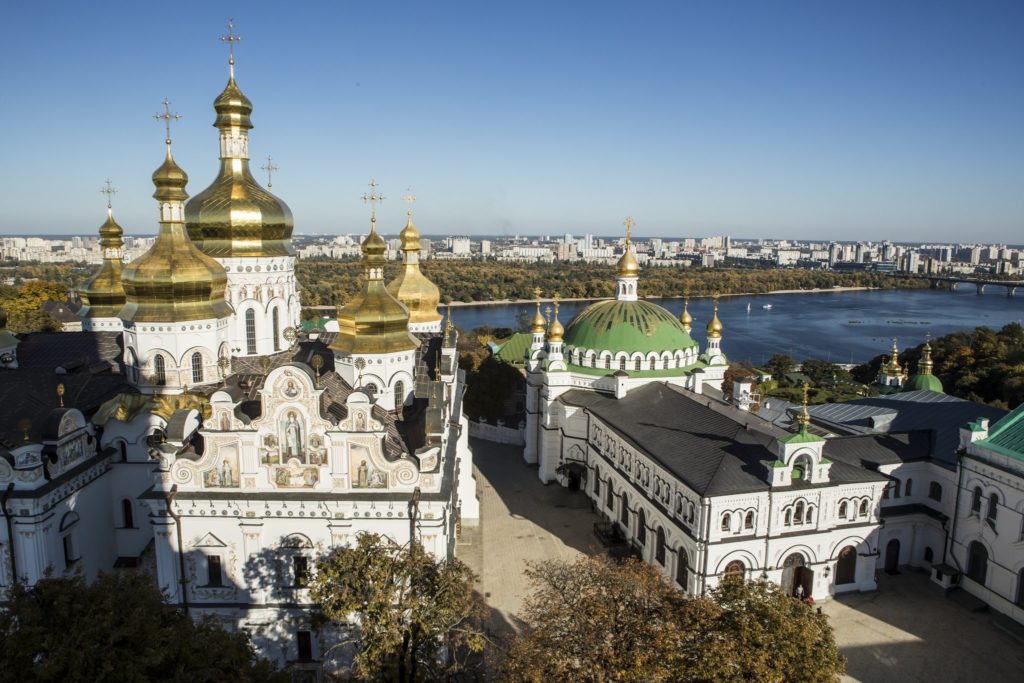 The Monastery of the Caves in Kiev, owned by the Ukrainian state but occupied by followers of the Moscow patriarch under a long-term lease, could become a point of contention. Credit Brendan Hoffman/Getty Images

After Ukraine declared political independence from Moscow in 1991, rival churches were often left using the same places of worship on alternate Sundays or different parts of the same building.

Which group controls which property, however, now risks turning into a free-for-all as the new church seeks to assert authority, aided by the Ukrainian security service and politicians.

Ukraine’s Parliament voted in December to force the Moscow-affiliated church, currently known as the Ukrainian Orthodox Church, to instead call itself the Russian Orthodox Church in Ukraine, a name that would tar it as an instrument of Kremlin aggression, which critics believe it is.

“Renaming us will be the first step to taking away our property,” said Kiev’s Archbishop Kliment, a fervent opponent of a new church, which he described as “illegitimate and illegal.”

Russia has itself waged a relentless campaign in recent months to seize property owned by Jehovah’s Witnesses, a Christian denomination that the Russian Orthodox Church, wary of all rivals, has long denounced as a heretical sect and campaigned to have shut down. 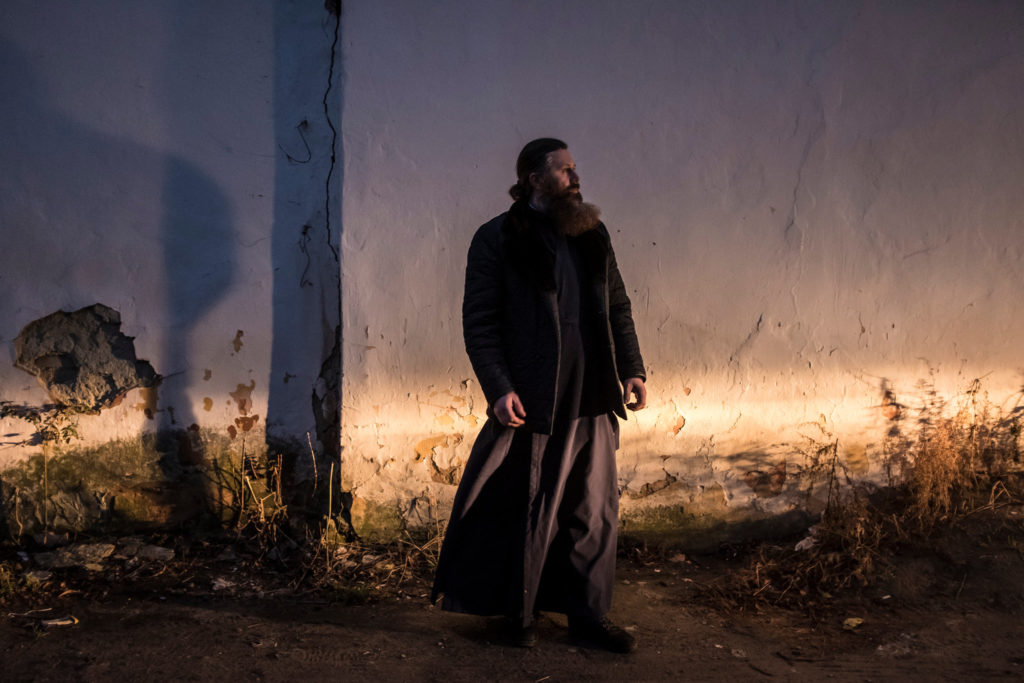 The Rev. Vasily Nachev, a priest at the Church of the Archangel Michael, in Rivne, Ukraine. He is an adherent of the Moscow Patriarchy, which is at war with a breakaway Ukrainian Orthodox church. Credit Brendan Hoffman for The New York Times

Serhiy Luchanin, the secretary to the bishop of Rivne, who broke with the Moscow patriarchate to support a rival leadership in Kiev, said there were no plans to seize property. But, he added, it was perhaps time for a more equitable distribution of real estate.

The Kiev Monastery of the Caves, where catacombs contain the remains of saints revered in Russia and Ukraine, for example, is owned by the Ukrainian state but occupied by followers of the Moscow patriarch under a long lease. The Ukrainian authorities recently conducted an inventory and searched the home of its abbot.

It remains to be seen how the property issues are settled, and where the investigation by Ukraine’s security service will lead.

When the priests were interrogated at the S.B.U.’s regional headquarters in December, Bishop Pimen of Rivne showed up to offer them support and to denounce the proceedings as an affront to freedom of religion.

All those called in for interrogation are forbidden by law to talk about the case, but the investigation seems to revolve, at least in part, around the discovery of an incendiary 12-page pamphlet produced by a group called the “League to Defend Orthodoxy.” 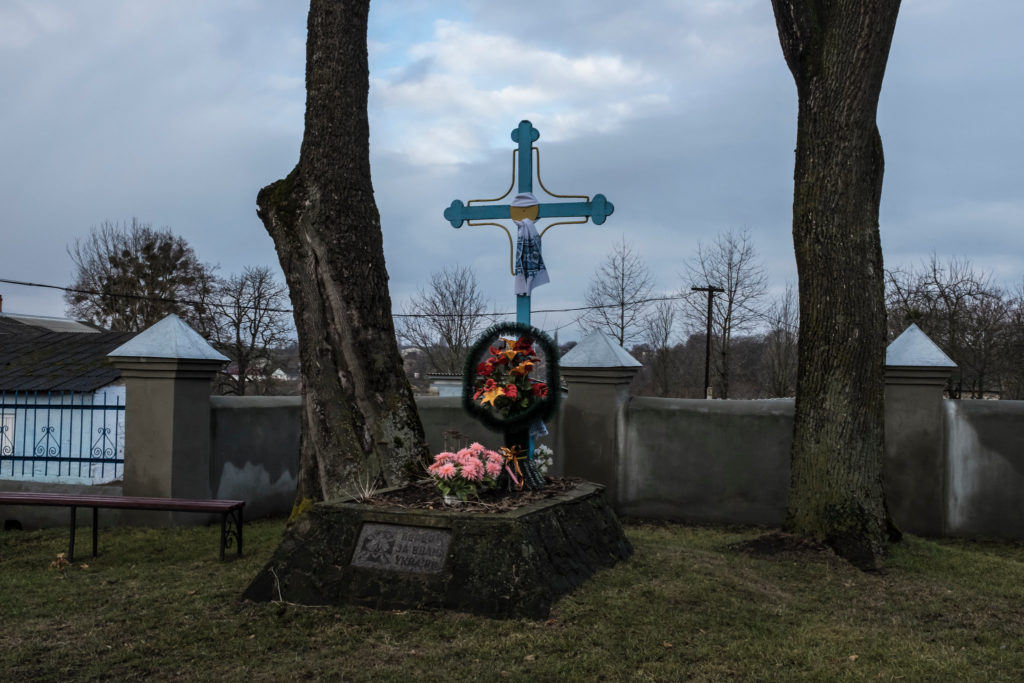 A memorial dedicated to “fighters for the freedom of Ukraine” in the yard of the Church of the Assumption of the Blessed Virgin in Hlynsk, Ukraine. Russia and Ukraine have been at odds over Orthodoxy since the 2014 revolution. Credit Brendan Hoffman for The New York Times

It denounces a Kiev-based church leadership as heretical and describes its Moscow rival, Patriarch Kirill, as the head of the only legitimate Orthodox church in Ukraine and elsewhere in the former Soviet Union.

Father Nachev, one of the interrogated priests, said that he had seen the pamphlet but that it contained nothing subversive, just the usual jeremiads that dominate Orthodox feuds.

The S.B.U., meanwhile, has released its own booklet, denouncing the Moscow patriarchate as an instrument of the Kremlin and claiming that its structures in Ukraine are used by Russia “to conduct hybrid war against Ukraine.”

Still, he has no sympathy for Orthodox priests who support the foundation of a new church separate from Moscow.

He views them as “schismatics” who threaten the worst split in Christendom since the Great Schism of 1054, when what are now known as the Catholic Church and the Orthodox churches parted ways.

The establishment of a new church to serve Ukraine’s nation-building project, he said, “puts Ukraine at the center of the church, but God must be the center.”