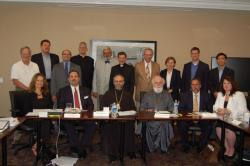 The Legal Affairs Committee of the Assembly of Canonical Orthodox Bishops held its first face to face meeting in Atlanta, Georgia on July 10, 2012.

Chaired by Bishop Daniel of the Ukrainian Orthodox Church of the USA, the committee is composed of attorney consultants from the Orthodox jurisdictions participating in Assembly. At this meeting the committee began legal planning to meet the immediate needs of the Assembly. This committee must consider and resolve a host of issues as it works to support the Assembly in laying ground work for organizational unity among the Orthodox jurisdictions in America.

To date, the committee has drafted Articles of Incorporation for the Assembly and the Assembly’s 501(c)(3) application has been submitted to the IRS. The committee is finalizing the Assembly Bylaws and reviewing the SCOBA transition process for receiving applications from organizations. Trademark and website domain registrations will be filed shortly.

In Atlanta, the committee focused on finalizing a list of legal areas that will require its attention. Many of the topics were specifically requested by other committees of the Assembly (such as the development of Youth Protection/ Camp Regulations and Fiduciary Guidelines for the Assembly). The committee established 12 specific task forces to work on each of the areas it expects to address. Included is the study of the various legal policies and structures of the jurisdictions in order to assist the Committee for Canonical Regional Planning, so that it may have a clear understanding of the various legal approaches to organization, governance, property and other related matters.

In order to support the September meeting of the Assembly, the committee will produce proposals for Assembly insurance policies and delegations of authority. The committee expressed a desire to pursue potential collaboration with the legal committee of the National Conference of Catholic Bishops (USCCB) regarding certain policy/process areas and will pursue this possibility.

In order to facilitate the committee’s work, each legal area task force, led by a facilitator, will meet between committee meetings. The full committee plans to meet by conference call, monthly, beginning on August 15, 2012.